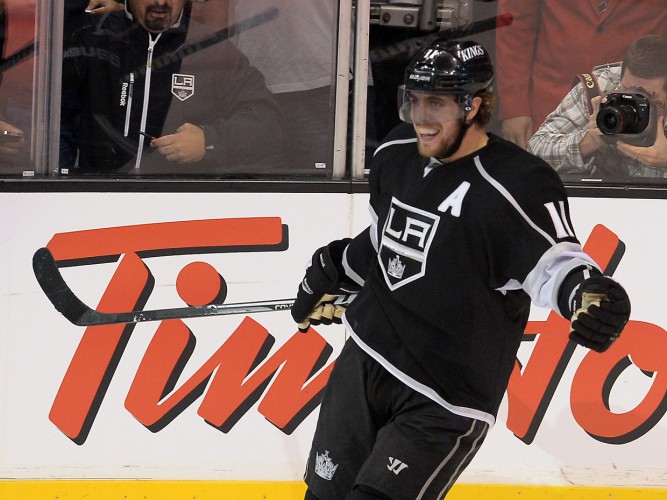 No rest for the wicked. The Hawks, and worse yet ourselves, will only have two days of recovery. Which means we must immediately turn our eyes to the next item on the docket, the small matter of the defending champs.

I think both sets of fans have been eying this series since the opening game of the season, if not a lot longer than that. I know Hawks fans have had this team circled as by far the biggest obstacle in the West, and I’m pretty sure Kings fans have targeted the Hawks since The Streak. It also feels that with how realignment will shake the league out, this probably is not the last time these two will tango to see who plays for the Chalice.

I think we’re destined to do this…..forever.

The Kings have two center-wing combos on their top six, Kopitar-Brown and Richards-Carter. These sometimes change, but for the most part all year those have been the looks with rotating wingers on the other side. For the most part in the playoffs, Justin Williams has skated with Kopitar, and professional thief and role model for sloths worldwide Dustin Penner has been with the Good Time Boys West. However, ol’ Darryl occasionally likes to reward a hot hand, so sometimes you might see Trevor Lewis or Dwight King sneak onto the second line.

You know what you’re getting with Williams-Kopitar-Brown. Dustin Brown used to be the non-Hawk apple of my eye until he exhibited a much larger turd streak than anyone outside of the Pacific knew about. I think my personal favorite was in the 1st round when he whiffed on kneeing and elbowing attempts on Backes in the span of about 1.2 seconds (though wouldn’t we all do that to Backes?). He dives, he leaves his feet occasionally for hits. But he’s a serious bowling ball who can expertly pick up things around the net and put it home. Hawks fans will hate him by no later than the 2nd period of Game 2.

Williams is another agitated badger, though not as explosively physical as Brown. His scoring comes from more finding open areas than face-first crashing into the net. But he’s seriously unpleasant to play against as well.

Kopitar is the Kings largest threat, and a conundrum for the Hawks. He’ll be impervious to the “rat” tactics of Bolland, if that’s how Q wanted to do it. He’s too fast for Handzus. And he might be too big for Toews. In fact, this series features two of the three best two-way centers in the league, with Bergeron in the other conference final. If Toews didn’t like how he was treated by Zetterberg, he’s going to hate how he’s treated by Kopitar. There’s nothing this guy can’t do, and he’s so strong now that he might not have to resort to the hooks and holds the Wings did because he can just power his way through.

And yet he’s not scoring. Two goals so far in these playoffs, and seven points after being a point-per-game last year. And you feel if he doesn’t score this series, suddenly the Kings are going to be up against it offensively.

I know the narrative now is that Mike Richards and Jeff Carter have shaken their playoff hoodoos after the Cup win last year and are now playoff killers. You’ll have to excuse me if I’m not buying it yet, especially with Carter. I know he had 8 goals last year and five this year and blah blah blah. 5 have come on the power play, two last year on two-man advantages. If given space on the power play or off the rush, yeah, Carter can seriously hurt you. But when you make him work to get open and create his own shot? I still need to be convinced. The memories of his ghost act in 2010 are not so faded yet.

Richards was too maligned for what went wrong in Philly, but seems perfectly at home playing second fiddle to Kopitar. Another power play weapon, and yet another who isn’t scoring much this spring. Only one even-strength goal. He’s also not winning a lot of draws, which is usually a staple of his game. Defensively sound as well, and this is who I suspect will get the job of checking close friend Toews, at least when the Kings are at home. He’ll take some beating. But can also lose his rag at times, which leads to enough trips to the penalty box that he looks like a drunk repeatedly heading to the pisser. Which he kind of is.

As for Penner, he’ll be an interesting watch. Will the lack of size on the Hawks cause him to be motivated and to turn into the unplayable Penner that earned him the fat contract from EdMo that also turned him into his own gravitational force? Or will having to chase the Hawks speed force him to quit once again and wait for the post game spread? If it’s the former it’s a real problem because the Hawks can’t deal with this size. If it’s the latter…it’ll be fucking hilarious.

In the Kings bottom six is a notable absence. Jarret Stoll has not been seen since the first game against the Sharks when he got Raffi-ed, and this was after taking a big hit in the St. Louis series that left him a little balloon-handed. He’s been practicing but isn’t cleared for contact yet, and looks a longshot to be a part of the early part of this series, if at all. That robs the Kings of a kickass faceoff guy and checking center, who can come up with the odd big goal as well.

In his place on the 3rd line has stepped Trevor Lewis, and he’s been solid. Yet another hard forechecker with the disposition of a woodland creature with piles. And that’s really what the Kings bottom six is filled with. Dwight King has not been able to replicate his playoff hero ways of last year, to the surprise of everyone. And by “everyone” I mean “no one.” That was all based on being at the right place at the right time, which he can’t always gets to because he moves like a resume through HR. He’s really not much more than Bryan Bickell, without the goals this year. But a physical presence for sure. Brad Richardson is another low-skill, high-motor battering ram that’s been dynamite on the kill. The 4th line sees some combo of Tyler Toffoli, Colin Fraser, Kyle Clifford and Jordan Nolan. Nolan and Clifford would be your remedial class, Fraser yaps a lot for a guy who can’t really do anything, and Toffoli is the miscast rookie who is going to be bonkers good one day but isn’t really a 4th line player. Sutter tends to not send his 4th line out there much, especially as the games get tight.

When looking at this group, it’s easy to get awfully scared of the size and grit. All four lines are huge, and all four are determined to make abstract art on the end-boards, using opposing defensemen as paint. All four lines are defensively responsible and stick rigidly to the system, cutting off shooting lanes and keeping things jammed along the boards.

But they don’t score a lot. The Kings have only breached more than two goals without the aid of overtime or an empty-netter just twice this spring. They aren’t generating a lot of shots either, only getting over 30 once against the Sharks. Then again, they don’t have to. So while they may make life hell for the Hawks blue line, and they may wear them down, they don’t have enough firepower to blow you out, at least not consistently. As ugly as the games might be, the Hawks will be at-worst one shot away for most of them. At least that’s the feeling you get.

The Hawks are going to have to reverse the puck a lot to get away from this forecheck. They can’t just send pucks around the boards, because they’ll get swallowed up along them. The Kings love to keep the third forward high and ready to jam up the neutral zone, so the middle of the ice to get out should be available. If the Hawks can move the puck quickly on that reverse and with precision, you take half-to-three quarters of the Kings attack away. Those who can create for themselves are mostly d-men for the Kings, aside from Kopitar. They rely on turnovers behind the net and loose pucks around the slot. If you take the former away from them, they can’t get a lot of the latter.