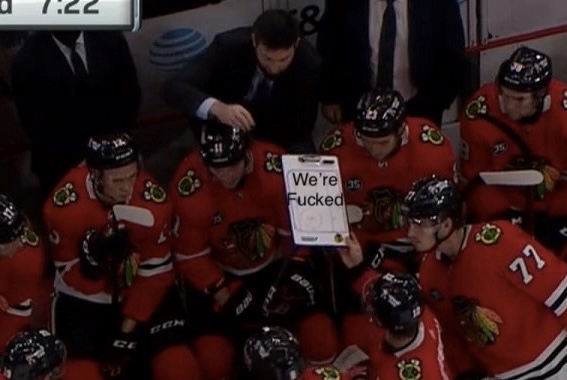 It’s not getting any better, folks.

The Hawks have now lost 6 games in the fledgling 2021-22 season (Motto: Good Seats Still Available) and have set an NHL record for shame and futility having now gone 360 straight minutes to open a season without having a lead in a game. In addition to that heaping pile of pathetic, the Hawks sellout streak ended in acrimony on Sunday night with an announced attendance of 19,042 but in reality looked a lot more like this (courtesy of Ben Pope on the Tweet Machine): 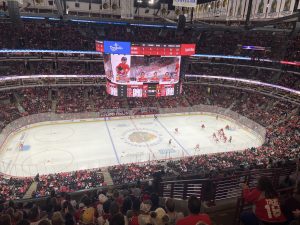 The end of the sellout streak resulted in this unintentionally hilarious statement from front office bobblehead Danny Wirtz, which basically implied that yes, good seats ARE INDEED STILL AVAILABLE:

With a slate of games upcoming against higher tier opponents like St. Louis and Carolina, its very possible that this Hawks team will start the season 0-8-1. While everyone assumes the team is going to HAVE to launch Jeremy Colliton into the sun if that were to happen, I’m not entirely convinced Stan will put him out of his misery. The two are irrevocably tied together, and Old Yeller-ing one would require the same of the other.

I personally have no evidence of this, but I’m wondering if the Wirtz Clan is keeping Stan around to take the fall for the sex abuse scandal when the discovery phase of the trial hits. Either way, this shit has become nigh unwatchable and based on ticket prices on Stubhub I don’t know if Danny Boy will be able to wait that long, or if there will be anyone left to care when he does.

One period into this game, it kinda sorta seemed like the Hawks were going to make an effort of it. They kept the Isles pinned in their zone to the tune of a 60% CORSI for (their highest number for a period thus far in the season), and had a couple of dangerous chances against Ilya Sorokin that should’ve had the Hawks feeling pretty good about themselves heading into the locker room after 1.

The reality of it all was, however, that the Isles were simply playing the perfect road game there on Madison and they merely waited for the Hawks to (inevitably) make a stupid mistake and then capitalized on it. That mistake came in the form of Henrik Borgstrom, Riley Stillman and Erik Gustafsson (of course) chasing Oliver Whalstrom below the fucking goal line, leaving Anthony Beauvillier all alone to slip one past a sprawling Marc Andre Fleury, making it 1-0 and giving the Isles a lead that they’d never relinquish.

The Isles made it 4-0 on two goals by Whalstrom and one by Cal Clusterfuck before MacKenzie Entwhistle was able to end Sorokin’s shutout bid with 26 seconds left in the game. As we’ve been saying all along, any coach worth his salt will eventually pants Jeremy Colliton right out of the building and Barry Trotz is worth mountains of it. This outcome was preordained and shouldn’t have been a shock to anyone with a functional parietal lobe.

Once again, it seemed like the Hawks might have a chance in this one as the first really wasn’t the dumpster fire the other first periods were during week one of the season. The Canucks did score first, and predictably it came from Erik Gustafsson being out of position chasing a hit below the goal line again and leaving the slot wide open for a Jason Dickinson one timer. The Hawks were able to answer not 2 minutes later however when Kyle Burroughs was sent to the sin bin for tripping up DeBrincat. The Hawks power play (which has been the only fucking decent thing so far this year) went right to work, with Kane winning a board battle against Dickinson and Tucker Poolman (porn name) and sent the puck up to Seth Jones who set up DeBrincat with a nifty one timer that beat Thatcher Demko far side.

Looking at the CORSI for the game, you’d have to assume that the Hawks got goalied as they held a 52 and 61% share of the possession in the 2nd and the 3rd, and had a majority of the high danger chances the rest of the way, but it never really felt like Demko had to work much to keep the Nucks on top. Meanwhile at the other end, every time Vancouver crossed into the Hawks zone you pretty much expected the puck to end up behind Lankinen and that’s pretty much what happened. Demko made some choice saves and Lankinen didn’t. 0-4-1.

Honestly, there’s not much to say here. The Hawks got absolutely domed in all facets of the game by a team that had played the night before (and been scorched to a crisp by what had been a winless Montreal team up to that point) and was on it’s 3rd game in 4 days in 3 time zones. Marc Andre Fleury looked completely disintristed, and really who can blame him when most of his “defenders” avoid the area in front of his crease like Tyler Bertuzzi and scientific evidence.

With Patrick Kane out as a close contact exposure to BERTUZZI-19, the power play was pretty lifeless, pissing away two 5 on 3 opportunities. Tyler Johnson made a nice play in the 1st powering his way to the net, but then wiped it all away by taking 2 dumb stick penalties immediately after the Hawks had score, killing any momentum generated. The UC was half empty, and the half that was filled was at lest 50% Detroit fans. The sellout streak ended, but it’s been replaced by a much worse one with the Hawks now owning the dubious distinction of going the longest to start a season without a lead. Then the cherry on top of the shit sundae happened in the 3rd:

Hawks call timeout, Colliton hands the dry erase to the players, they appear to draw something up and hand it back. that’s…interesting pic.twitter.com/6LTNLBYbDe

There’s no end in sight for any of this, as much as we all want to get off this poorly maintained carnival ride. The roller coaster is out of tracks, and Stan Bowman is the carnie asshole who forgot to finish building it. There’s no coaching going on, there’s no fun being had by anyone, and there’s little hope that anything could possibly be turned around before the coaster flies into a brick wall, but at least there are still good seats available.