High On The Hog: Too Much Iowa To Handle 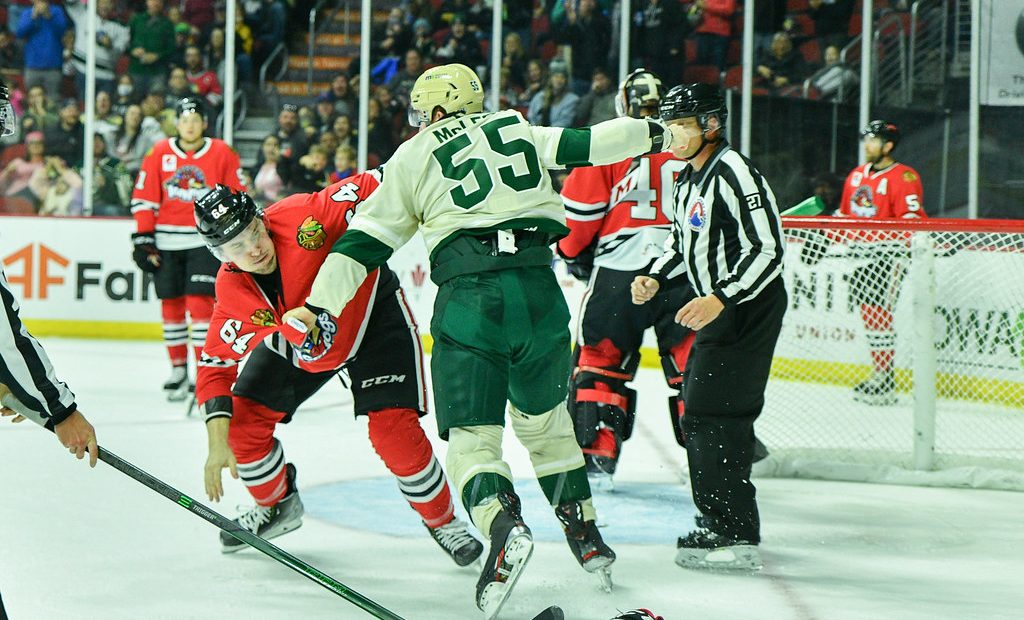 The Rockford IceHogs took some lumps in Iowa this past weekend. The Blackhawks AHL franchise continued what is going to be a six-game road trip in DesMoines, losing back-to-back games to the Wild.

Rockford led Friday’s affair twice before being snowed under by a four-goal middle frame by Iowa. The Wild outshot the Hogs 53-19 while pulling away to win 6-3. In the rematch, Rockford fell behind by three goals and dropped a 5-2 decision to Iowa.

As a result of the two losses, the piglets fall to the bottom of the Central Division standings, with the Wild soaring to the top. The IceHogs are 1-3 on the young season. They have two games this week with the team just above them in the Central, the Texas Stars. Rockford will play in Cedar Park Thursday and Saturday this week.

On Saturday, after he posted a goal and an assist against Iowa the night before, the Blackhawks recalled forward Reese Johnson. Johnson looked good in his first three games with Rockford. His time up with the Blackhawks showed on the ice; Johnson has been a leader despite not being much older than the rookies.

Johnson also showed the desire to plant himself in front of opposing goalies and hold his ground against defenders. His goal Friday was a tip-in from the front of the net.

On Sunday, defenseman Ian Mitchell was recalled by Chicago in time to take part in that night’s game with the Red Wings. Mitchell was scoreless with a minus-four rating in two games with the Hogs.

The Hogs were out shot 53-19 on the evening. Despite leading on two occasions, Rockford dropped the first meeting with the Wild this season at Wells Fargo Arena.

Rockford took a 1-0 lead late in the first period, courtesy of a nice give and go play by the piglets. Issak Phillips got the clearing pass out of his zone and to the stick of Jakub Pour. Pour sent a cross-ice pass to Reese Johnson in the neutral zone, then skated to the right circle to take Johnson’s drop pass. The shot beat Wild goalie Andrew Hammond low to the blocker side at 17:51 of the opening period.

Iowa tied the game 32 ticks into the middle frame on a Connor Dewar goal. Rockford re-established the lead at the 5:53 mark when Johnson sent a feed from Cliff Watson over Hammond’s glove. Two goals from Iowa’s Nick Swaney put the Wild up 3-2 midway through the second.

The IceHogs tied the game on a power play 11:30 into the period. Lucas Reichel was attempting to send a pass through the crease when the puck struck the skate of Wild defenseman Jon Lizotte. Hammond could only watch as the carom entered the goal, and the game was even at three goals.

Damien Giroux flipped a backhander past Hogs goalie Arvid Soderblom 14:51 into the second to give Iowa a 4-3 at the second intermission.

Things got out of hand in the final twenty, with the Wild going up 5-3 on a Mitchell Chaffee tally 3:45 into the third. Iowa made it 6-3 on Giroux’s second of the night.

After two goals the previous evening, Nick Swaney victimized the IceHogs for two more Saturday night, leading the Wild to their second-straight win over Rockford.

Swaney put Iowa up 1-0 early with a power play tally. With Lucas Reichel in the box for slashing, Swaney skated into the slot with the puck, beating Hogs goalie Collin Delia high to the stick side at 1:11 of the opening period.

The IceHogs were 0-6 on the man advantage for the game and whiffed on three power play chances in the first period. Iowa took advantage of a Reichel turnover in neutral ice to go up 2-0 at the 11:51 mark. Cody McLeod chased down the loose puck after the Hogs rookie lost the handle, leading Swaney on an odd-man rush toward Delia. Swaney converted on the tap in to put Rockford in a hole.

Another quick strike to lead off the second period saw the Wild take a 3-0 advantage. Delia left a long rebound on a Will Bitten shot; Mason Shaw collected it in the slot and fired to the twine 1:28 into the second.

The IceHogs got on the board with an Alex Nylander goal coming off of a faceoff win by Reichel. Nylander got the the puck near the top of the left circle and sent a shot past Iowa goalie Dereck Baribeau at the 4:30 mark.

Iowa restored the three-goal lead on the power play. Swaney set up Kyle Rau in front of Delia with Andrei Altybarmakian serving a penalty for high sticking. The goal came off of Rau’s leg and past Delia at 7:53 of the middle frame for a 4-1 Wild lead.

The Hogs would cut the lead to 4-2 on a Jakub Pour goal, set up by Altybarmakian and Dylan McLaughlin 10:51 into the second. The Wild responded with a goal by Adam Backman, who beat Delia from the left dot at the 17:08 mark. Rockford entered the locker room down 5-2; neither team scored in the final twenty minutes.

Delia took the loss for the Hogs, giving up five goals on 31 Iowa shots.