High On The Hog: A Weekend In Iowa 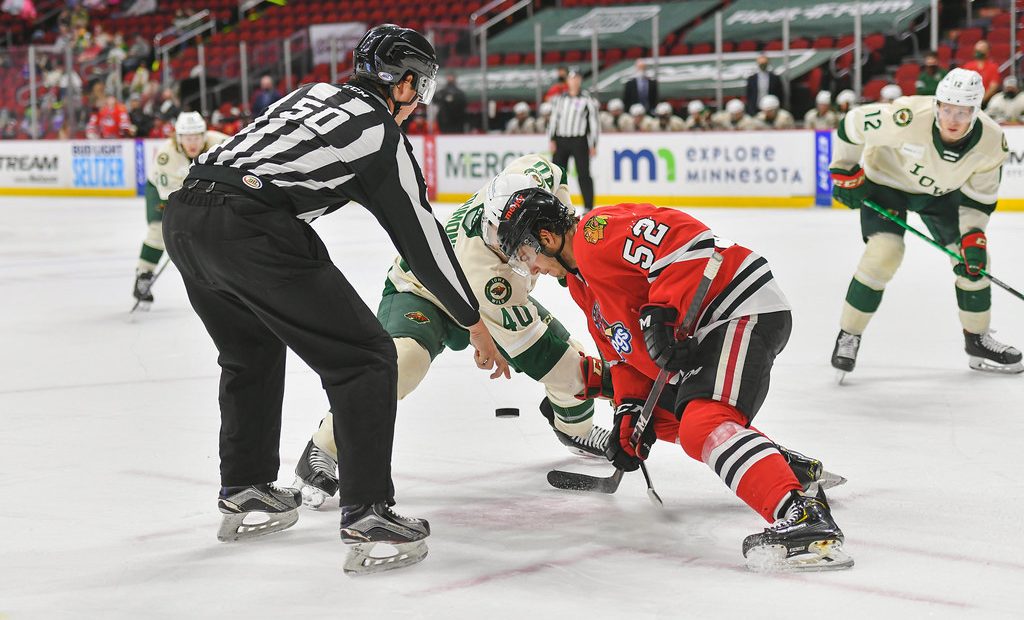 The Rockford IceHogs continue their October tour this weekend. The action takes place in DesMoines, where the piglets will face the Iowa Wild on Friday and Saturday nights. After splitting the first two games of the season in Grand Rapids and Chicago, the Hogs could see their points percentage climb above the .500 mark for the first time since the 2019-20 campaign.

On Monday, the Blackhawks called up forward Mike Hardman, sending defenseman Ian Mitchell to Rockford. The IceHogs assigned goalie Cale Morris to the Indy Fuel of the ECHL.

Morris joins goalie Tom Aubrun in Indy. In addition to the two netminders, Rockford has several AHL contracts assigned to the Fuel roster. These include forwards Liam Folkes, Riley McKay and Chad Yetman. Indy hosts Cinncinati on October 23 to open its schedule.

A Look At The Wild

Iowa has some new faces, though the Hogs should be familiar with some of them. Forward Dominic Turgeon and defenseman Joe Hicketts come over from Grand Rapids. Longtime Iowa forward Kyle Rau is back after spending last season with Minnesota. Center Connor Dewar returns for his third season after posting 23 points (12 G, 11 A) in 32 games for the Wild in 2020-21. He currently leads Iowa in scoring (2 points) following the first weekend.

The Wild split two games with the Texas Stars to open their season. Veteran goalie Andrew Hammond shut out the Stars on October 16. He’s coming off a solid season with Rochester last spring (2.53 GAA, .908 save percentage) and will likely split starts with prospect Dereck Baribeau against the IceHogs. Baribeau was 2-0 against Rockford last season, with a 2.10 goals-against average and a .925 save percentage. Overall, he was 6-1-2 in ten appearances (2.54 GAA, .914 save percentage).

The Hogs will be leaving Malcom Subban at home for the weekend. Collin Delia looks to get his first start of the season. Arvid Soderblom, who will likely get the other start this weekend, shut out the Wild when the teams met in the preseason on October 23.

Nothing has been announced as of yet, but Chad Krys may be out for a stretch after suffering a knee injury on October 16 in Chicago. Mitchell will likely draw into the defensive mix regardless.

Follow me @JonFromi on twitter for updates on this weekend’s games, as well as my thoughts on the IceHogs all season long.