Well Pilgrim, Not Until You Eat The Peanuts Outta My…-FFUD’s Player Reviews: Artem Anisimov or He’s Kinda Like Dave Grohl 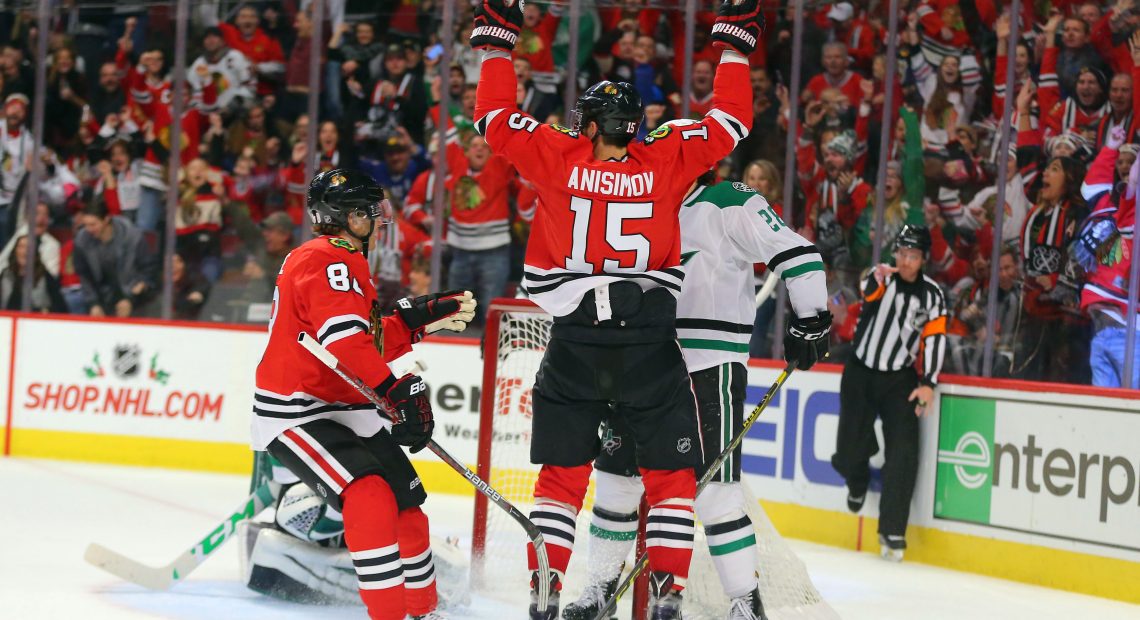 We’ve had three years of Artem Anisimov now. And we’re still not sure if he’s anything more than an obelisk. And a lot of offseason plans hinge on what the Hawks want to do with him, or think they can. It was something of an odd year, for everyone but Arty especially. Let’s do the thing.

As far as goals go, this was pretty standard Arty stuff. 20 goals, as he’d put up 22 and 20 the tw years before. What didn’t go up, and went down, were the assists, as he wasn’t playing the entire year with Kane and Panarin. And what became clear this season is that Arty didn’t really add a lot to those two’s games when they were here and he was permanently the 2nd line center.

Anisimov spent most of his time with Kane, and Schmaltz, but spent more time away from Garbage Dick this year than he had in the two previous combined. And when you look over Arty’s WOWYs, you realize that just about everyone is better away from Anisimov than with him. Kane’s, Schmaltz’s, and Jurco’s, possession and chance-percentages all go up away from Anisimov, and those were the three most common wingers he had.

What became clearer and clearer this season is just how much Arty’s lack of speed hurts him. He doesn’t win any draws, as we know, and the fact that he doesn’t move much is fine when Kane or Panarin can just hold the puck for 10 seconds and let him get to the net. They also had the talent to just play without him. But the only way the Hawks could replicate that this season was having Kane and Schmaltz do it, and Schmaltz is better in the middle, which put Arty on a wing and no one wants to see that again either.

Anisimov and Jurco combined to form a nice bottom six line, whichever one you decide it is. But you also get the impression Jurco was doing most of the work, and you could find someone faster, cheaper, and younger to basically do the same job. You would lose a power play weapon of course if Arty goes, because he can be the obelisk in front as it doesn’t involve skating back really.

Perhaps the strangest part of the year was when Elliotte Friedman reported that teams had called about trading for Anisimov but the Hawks had refused to even discuss him. Really? Perhaps they didn’t want to ask to have him waive his full no-trade when it is now a partial and they can have him just submit a list, but that seemed weird. The Hawks need the cap space and in a league and especially division that is speeding up, Arty didn’t fit. We shall see.

Outlook: In a normal world, Arty’s ass would be grass and he would be moved no later than the draft. The Hawks need to get quicker everywhere they can, they could really use $4.5 million in space for the next three years that punting him would generate, and quite frankly you can just do better there. And maybe that’s the plan here.

But he can’t be traded under a partial NMC until July, and given how much Eddie and Pat–nothing if not the team’s bullhorn–bleat on about Annette Frontpresence all the goddamn time, you wonder if they don’t value Arty’s ability to stand up in one place more than they should. We’re almost sure the coach does. So the Hawks might genuinely think he’s a piece they have to keep, where they can watch oh, Turris, Little, Staal, Jost, and whatever other second and third center on opponents skate around him every night.

Arty is a lot like Dave Grohl. If he’s a support piece to much better players doing the work, you’re fine with it. If you’re asking him to be the lead guy, you’re going to get a lot of crap. Sadly, like millions, I think the Hawks might be mesmerized by the empty crap.