You Get What Anyone Gets: Saying Goodbye To The Boston Bruins 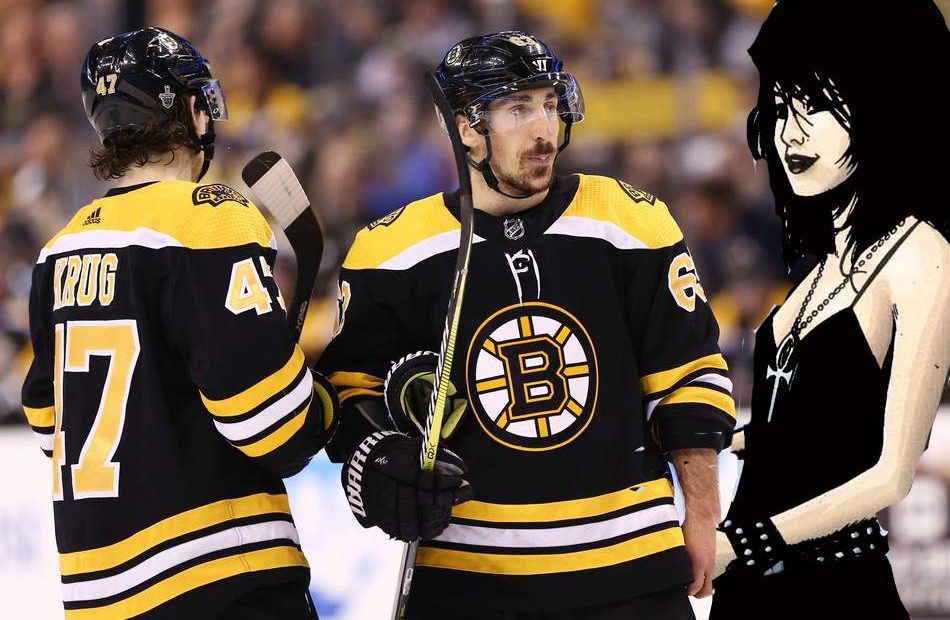 You have to hand it to Brad Marchand. Some people saw “Wag The Dog” and just enjoyed it. But some saw it and thought they could apply it to their own lives, no matter the forum. Because look at all the things his wandering tongue distracted us from.

The first and foremost thing we stopped paying attention to when Marchand wanted to know how to get to everyone’s chocolate center was that the Bruins overall were something of an illusion. Actually, a massive illusion. They were one line and a goalie having a renaissance season.

How do we know that? Because of the way everyone drops when Patrice Bergeron wasn’t on the ice. Charlie McAvoy, the moon-faced mouth-breather that looks like every Tufts student who got lost in Kendall Square on a Saturday afternoon that went wrong, spent most of the year bathing in the plaudits and accolades and the little cartoon tins of Skoal that emote from admirers in Quincy and Dorchester. He was great when Bergeron was keeping the puck in the other end. But every time you looked up this spring, he spent more time in the trail-technique than Sargent Stedenko.

Brad Marchand’s taste-buds-in-wanderlust also kept most people off the fact that Zdeno Chara is old and slow, which tends to happen when one is the size of an armored truck and 40. Good thing they re-signed him for another year. The Hawks beat the Bruins five fucking years ago by going straight at him with speed. How was that going to get better now?

It also, somehow, convinced people that Rick Nash–Rick Goddamn Nash who has been the posterboy for playoff incompetence since just after the last Tool album was released–was a prime deadline pickup.

Rick Nash had the same exact season that Brandon Saad did and yet everyone thinks Saad should be turned into cow feed. But it makes Rick Nash the piece you have to have. Seriously, what is this happy horseshit?

All that teeth-gnashing over tongue-lashings, combined with Pierre McGuire’s hit-fetish, swayed people from paying attention to David Backes–he of the $6 million for three more years–managed all of one goal this playoff run. Goes nice with his one goal from last year’s. They make a nice set! Too bad he won’t be able to count to two from here on out but hey, shit happens.

But perhaps the biggest piece of genius that Marchand touched upon when he touched his tongue upon those who did not invite it was that Marchand continued his playoff dog ways that he’s been perfecting since 2012. Coming into this spring, in 47 playoff games Marchand had managed six goals. And sure, the cure for that, at least temporarily, was to play a team that didn’t have a defense and a goalie who was convinced he was a glass of orange juice in Toronto.  There’s curing the disease and just treating the symptoms, though. Put in front of an actual goalie and defense, Marchand managed no goals and four points in four straight losses. Fucking dynamo stuff, that.

It’s kind of amazing how the Bruins got here, with that defense and nothing behind that top line. Sometimes hockey is just fucking weird. It also helped that they were in a division with five garbage teams they could harvest the organs of. Going 12-0 against Ottawa, Detroit, and Montreal sure provides a hell of a shine. Better than turtle wax, you’d have to say.

Naturally, Boston fans and media are taking this defeat lying down like they always do, doing the reverse sirens’ song they specialize in that makes everyone want to leave the East Coast the minute they get off work. Next fall we can look forward to really hot, “NO ONE SANG THE ANTHEM LIKE FAHKIN’ RENE! NO ONE DENIES THIS!” God help us if the Bs hire a woman or minority to replace him, given the oh so liberal nature of the Boston sports scene. It’ll be a full week on FartStool. That is if they’re done complaining about the refs by then. Or 2050.

The Bruins look set for the future, though if McAvoy’s face continues to get in the way of his vision and defense it might not matter. And there’s still Don Sweeney in the GM chair, the guy who decided Dougie Hamilton wasn’t worth it but Torey Krug and his broken GPS were. Highlight stuff there.

So goodbye, Bruins. You were a Copperfield trick that had us all fooled. But eventually, Claudia Schiffer wises up.