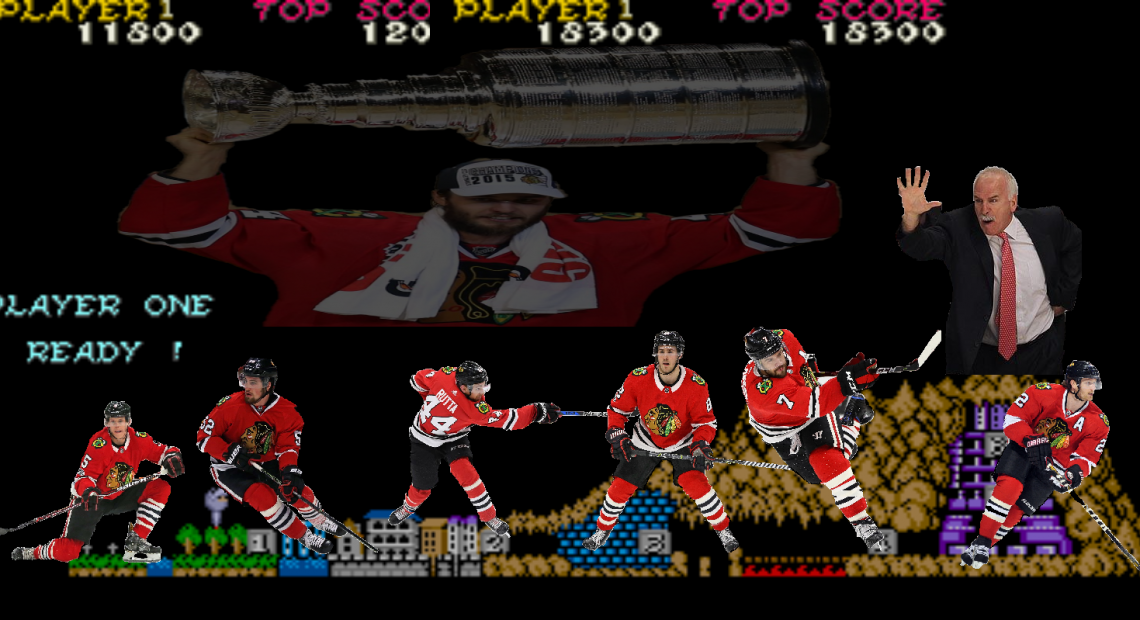 When the Hawks brought Connor Murphy in, he was the presumptive favorite to replace the puck-pocked husk of what was once Niklas Hjalmarsson. And as the season went on, and the Hawks found their heads deeper and deeper in the toilet, the narrative began to range from “the Hawks will need a Top 4 defenseman next year” (true) to “the Hawks really miss Hjalmarsson this year” (categorically false in terms of on-ice performance).

After some early season struggles, a few confounding healthy scratches, and a mostly successful experiment on his off side, Murphy settled in to produce a couple of interesting career highs and team rankings. Let’s kick it.

What We Said: Behind Keith and—if you look at him with enough glare from the sun—Seabrook, Murphy is probably the Hawks’s third best D-man. He’s fine if not underwhelming for the price ($3.85 million cap hit), but on the edge of 24, he will need to prove that his numbers really are the result of playing in America’s chafe rather than wasted potential. Given that the Hawks have won three Cups on the backs of their defensemen . . . Murphy will need to develop into a shutdown D-man fast.

What We Got: We’ll start with some numbers (feel free to skip the bullets if all you want is the explanation).

– Murphy finished fourth in Expected Goals For Percentage (xGF%; 51.57) among Hawks D-men who played at least 20 games (behind Franson, Kempný, and Gustafsson). When bumped up to 40 games, Murphy was the leader.

– Finally, Murphy finished third in Expected Goals For Percentage Relative (xGF% Rel; 2.99) among Hawks D-men who played at least 20 games (behind Gustafsson and Franson). When bumped to 40 games, he’s the leader again.

All of this is to say that in terms of possession, Murphy was good if not great overall. He was better than the Hawks’s average in terms of giving up high-danger chances, but not great in a vacuum. And when he was on the ice, the Hawks could have expected more goals for than against.

That said, one of Murphy’s glaring weaknesses, especially at the beginning and end of the year, was his struggle to clear the puck in his own zone under pressure. 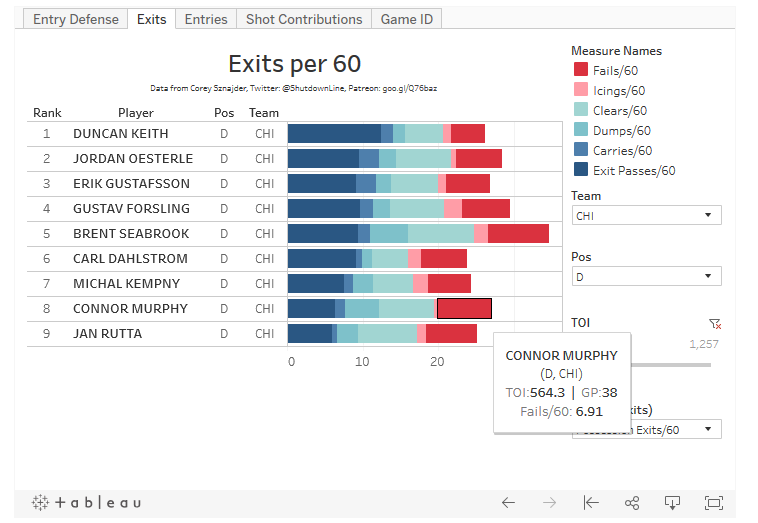 The above graph, which was tracked by Corey Sznajder, tells us that of these nine Blackhawks, only Brent Seabrook had more failed zone exits per 60 minutes of play. This means that the opposition was more likely to sustain pressure when Murphy had the puck in his own zone, which, of course, tends to lead to more opportunities to score goals. And while these data aren’t comprehensive (only tracked through 38 games), it does give us a good sample size for what’s pretty obvious through the eye test: When Murphy was pressured in his own zone, he sometimes panicked.

While Murphy absolutely must keep his spurs from jingling and jangling in his own zone if he’s going to develop into a true Top 4 shutdown D-man, it’s hard to ignore the carousel of D-men he was jerked around with this year and wonder whether that affected his play.

Given how often he got jerked around, including playing his off side in his 25 games with Seabrook, one thing that stands out is the relative consistency in his possession numbers, aside from Keith. And despite the fact that the Hawks were the seventh worst team in giving up High Danger Chances, Murphy still managed well when away from Oesterle and Keith.

But therein lies the problem: Since the assumption is that Keith takes on the toughest competition (and he usually does), Murphy’s piss-poor numbers with him might suggest that he isn’t a Top 4 guy like Hjalmarsson was.

But this dovetails nicely with the overall point I want to make: The Murphy-for-Hjalmarsson trade wasn’t the loss for the Hawks some people want to say it is, and having Hjalmarsson over Murphy would have made things worse, not better.

Check out some of Hjalmarsson’s numbers when he played with Keith over his Hawks career:

Like Murphy, Hjalmarsson had a rough go of it in the first 100 or so minutes with Keith, and that was when Keith was starting to go full Oppenheimer on the league. Coincidentally, it wasn’t until Hjalmarsson turned 25 that things really started to click any time he played with Keith, and next year Murphy will be 25.

Clearly, this is simply a coincidence, as raw age will have no effect on how (or whether) Murphy plays with Keith going forward. But this idea that Murphy doesn’t have Top 4 potential because he didn’t play well with a declining Keith over seven games this year is one of the more confusing implications I’ve heard this year.

The last point I’ll make regarding the implication that the Murphy-for-Hjalmarsson trade was a loss for the Hawks and that the Hawks miss Hjalmarsson is this: 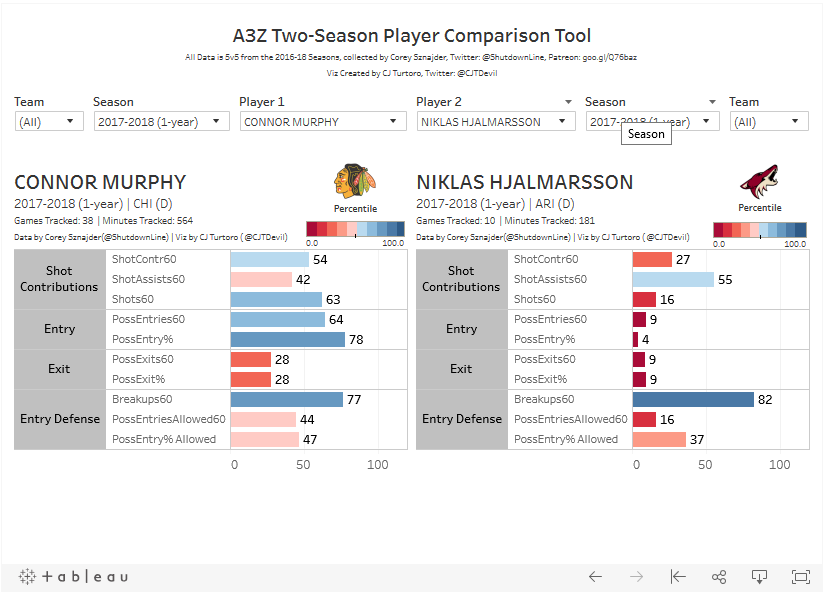 Using more of Sznajder’s tracking data, it’s obvious that Murphy brought more to the table for the Hawks than Hjalmarsson did for the Coyotes this year. One of the two things that Hjalmarsson did that was marginally better was in terms of the breakups he caused at the blue line, preventing opponents from entering the zone with possession. (Note: They only tracked Hjalmarsson for 10 games this year against Murphy’s 38, so consider the sample size.)

Going even farther—because I have no sense of moderation whatsoever—even when comparing this year’s Murphy to last year’s Hjalmarsson, the differences aren’t as big as you’d think, mostly: 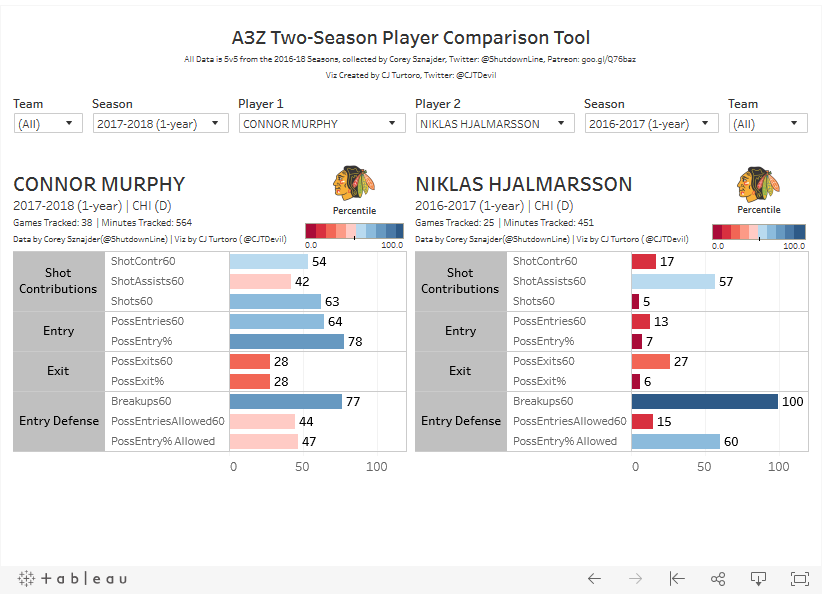 So even when we recognize and admit that Murphy had trouble with his exits from his own zone, the revisionist history that Hjalmarsson was an indispensable cog whose absence contributed to this year’s downfall doesn’t really hold water. Last year’s Hjalmarsson certainly had a better performance in terms of breakups and the percentage of entries he allowed, but he did it primarily with a not-yet-in-full-decline Duncan Keith covering him (or vice versa). Murphy spent most of his time with the glob of ambergris that is Brent Seabrook.

In short, Murphy had a good year with the Hawks despite his coach’s best efforts to jerk him around, was better than Hjalmarsson would have been, and stayed generally consistent despite spending almost a third of his year on his off side babysitting Seabrook. He’ll never be a game breaker, but he doesn’t have to be.

Where We Go From Here: Connor Murphy ought to open next year next to either Keith or Erik Gustafsson. If the Hawks are going to look at Keith as a Top Pairing Guy next year (they probably shouldn’t), they have to give him someone to cover his ass when his brain says he can make a play but his feet disagree, as we saw more often this year. I’d argue that Murphy, more than Oesterle, is that guy, despite how poorly they played together last year.

Whether you think Gustafsson is a second pairing guy is a conversation for another day (for the record, I can see it if I squint, and I’m willing to try it). But what’s undeniable is that in 135 minutes together at 5v5, Murphy and Gustafsson had a 57+ CF% while starting in the offensive zone at a 49.45% rate. With Murphy and Gustafsson entering their primes at 25 and 26, and each having paper that runs at least through 2020, pairing them might be worth an extended look, but it probably requires outside help to pair with Keith.

If the Hawks manage to sign a guy like John Carlson, or swing a trade for an OEL, Darnell Nurse, Justin Faulk, or maybe Oscar Klefbom, you’ll feel more comfortable about having the new guy and Keith as the top pairing, with Murphy covering Gustafsson. Or, you can pair the new guy with Murphy on the top pairing. This would let Keith slot in the second pairing with some iteration of Gustafsson on his off side, Forsling on his off side, Jokiharju (which is probably too much to ask), or Oesterle, because you know that’s going to happen again, despite our wailing.

Regardless, the Hawks have to saddle Murphy with more responsibility next year, whether they like it or not. The Hawks have a Top-4-potential guy in Murphy, and when he wasn’t getting the runaround, he showed flashes of it last year. Whether they use him that way is anyone’s guess.

All stats from hockey-reference.com, NaturalStatTrick.com, or corsica.hockey, unless otherwise noted.