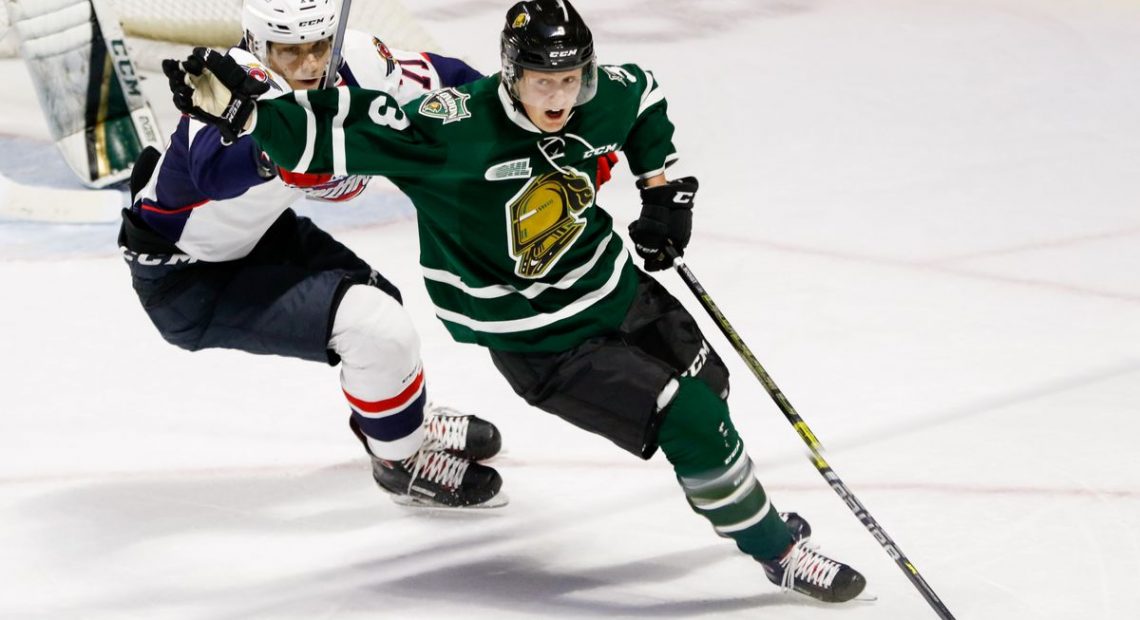 I should have learned long ago that your first instinct is usually the right one. You can review and hem and haw and contemplate, but generally the first thing you thought, or your first reaction, tends to be where you end up no matter how long and arduous the journey is. When the Hawks drafted Adam Boqvist with the eighth pick, our thought was that for a team that needed to get help as quickly as it could and didn’t really have time to wait for development, taking the biggest project in the top-10 didn’t jive. And that’s what the Hawks were saying before the draft. It didn’t make a ton of sense then, and I don’t know that it does now. To be fair to the Hawks and Boqvist, no one taken after him is turning heads, and really only Evan Bouchard looks a lock for next season.

So now we have this piece from friend of the program Scott Powers. It’s about what you already know. Offensively, Boqvist is dynamic, exciting, and already a force. And a force ready for the NHL. But on the other end, he’s a mess. He’s small, he’s not engaged all the time in his own end, and he’s got a lot to learn positionally. Which leaves the Hawks in something of a quandary.

They’ve pushed and pushed their FOUR HORSEMEN OF THE BLUE LINE all season to sell hope. But now it seems that Boqvist can’t be here next year. Jokiharju will be, but he has yet to prove that he’s top pairing material. Nicholas Beaudin is probably a bigger project than Boqvist. And there are conflicting reports on whether Ian Mitchell is going to sign or not, though he’s now looks the most ready for the top league and maybe by a distance, at least for those who aren’t already in the organization.

So the Hawks have to enter the offseason knowing they need a top-pairing. Not one half of it, but the whole thing. And they can’t count on Boqvist.

The calculation to me-and I’m something of a nutjob, admittedly–is whether Boqvist is going to push the play enough that he’ll outscore/out-possess whatever stains he makes on the carpet in the defensive end. Remember what Erik Karlsson looked like in his own end when he first came up (and he’s still not really all that good there, but better). He was a disaster defensively. But it didn’t matter, because he kept the play in the other end 55%-60% of the time, or at least miles above what the rest of the team is. I don’t know how you make that calculation, but if you’re saying that his offensive game is already NHL-level, then fuck it, what do you really have to lose here? Just accept that for three to four years you’ll have to watch his defensive work through your fingers, and take the 50-60 points that come along with it as well as the puck moving in the right direction most of the time. Accuse me of hyperbole if you want, but the Hawks haven’t shied from the Karlsson-comparison themselves.

And even still, that doesn’t solve your problems. The Hawks won’t think like this, but in reality for next year they have Murphy flipping to the left side with Jokiharju, and Keith and Gustafsson on a ride-or-die third-pairing. Boqvist can’t be elevated above that, but you could arrange it somehow. Tell Forsling, Koekkoek, and Dahlstrom to go screw.

So let’s say they’re going to be boring and careful, and let Boqvist beat up on children in London for another season. You need two players. Whether that’s an offer-sheeted Trouba, or god please Karlsson, or the middle-of-the-road Jake Gardiner, or something else. You have to do something.

And yet I don’t know that they have to. I can’t tell you what Kane, Toews, and Keith would think about a third season in the toilet, though I’m pretty sure Kane doesn’t want to waste another MVP-worthy performance on the remedial class. I have no idea what their season-ticket renewal rate is for next year, we’ll find out I’m sure, but a second-straight playoff-less season has to put something of a dent in it.. A third would have to cause an actual tear, no? And are you really planning on making your move when Toews is 33 and Kane is 32? Toews is already declining in his defensive game, how much farther does he have to go?

But then, and it’s like we’ve said all year, you simply don’t have room for all of these kids. Even if you buyout Seabrook, even if you use Keith undermining his coach as a wedge to drive him out of town, there’s still not enough room. Where do you put them all? The other problem is that if Mitchell is going to be a signing-challenge, he’s basically unmovable. There are hard decisions to make.

And there’s nothing to suggest the Hawks have a plan to address this all (we know there’s a process). We won’t find out until draft day, and until then, it’s going to be urpy.