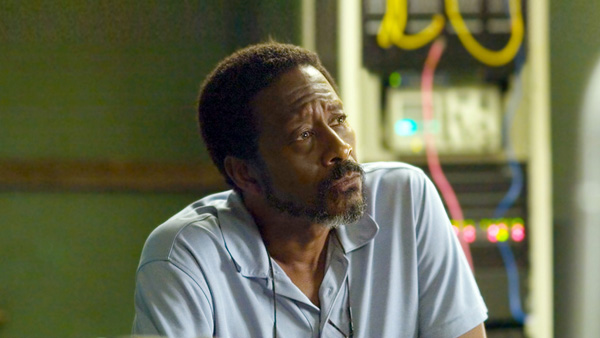 No one outruns time. We knew when Jon Lester signed this contract in the winter before the 2015 season, the end of it could get a little hairy. The Cubs have gotten just about what they could have expected, if not a little more. But the fear is that the END has come for Lester, and the Cubs and him are just going to have to survive the last year of it in 2020. Is there hope for better?

Tell Me A Story: Let’s start with the good stuff, just for funsies. Lester struck out more and walked less hitters in 2019 than he did in 2018. He had a better ground-ball/fly-ball rate. He gave up less line drives. So hey, that’s all good, right? Maybe he didn’t have as bad of a year as we thought?

That’s somewhat true. Lester was undone by a horrible BABIP of .347, 46 points worse than his career norm and a 57-point rise over 2018. That’s just luck…for the most part. Lester suffered from a bad hard-contact rate against, by far the worst of his career. Which followed ’18’s mark…which was also the worst of his career. That’s not luck. Lester gave up an expected average against of .282, which is some 60 points worse than his brilliant 2016 for comparison. It was a similar story with the expected slugging and weighted on-base against him, so though he probably could expect a few more balls to land in gloves, considering the amount of rockets he was giving up he can’t really depend on the good fortunes of BABIP Treachery either.

Lester tried to bat away the ravages of age by going less and less to his declining fastball and using a cutter more, probably to get in on righties a little easier. It did not go particularly well, as hitters went for a .294 average against it and a .506 slugging. Perhaps more worrying is this: 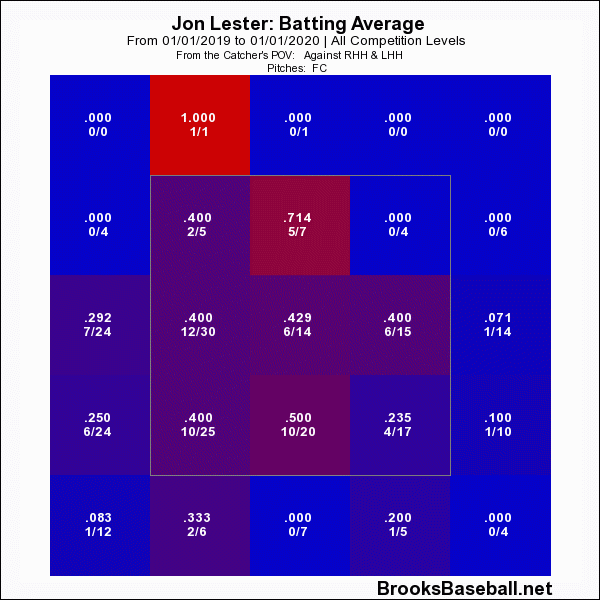 Whenever Lester threw that cutter in the zone, it got pulverized. And while Lester lives on the edges, he does have to throw a strike, y’know, occasionally. Whenever he did with the pitch he used most, it was plasma. This is a problem, and leads you to believe there will have to be a change in approach come the ’20 season. In previous seasons, Lester had found success by keeping that cutter up and in on righties. But even that, as you can see here, didn’t do much good this past season. Is he going to have to be Gio Gonzalez now, and just wager that hitters can’t stay patient enough to not swing at four balls before they get themselves out? It might be worth a shot.

It got to the point with Lester where the rotation was rearranged in September so that he wouldn’t pitch against the Cardinals in that series at home. Lester was ok in September overall, giving a good outing against the Reds in that Week-us Horriblus and holding the Mariners down on Labor Day. But he also got horsed by the Brewers and Pirates when the Cubs needed at least length against the latter and a win against the former. You always counted on Jon to somehow gut through a game the Cubs had to have, and either he didn’t at times or they stopped counting on him to do so. That’s probably the surest sign of age right there. Overall, Lester was blowed up in August and not much better in September, which again might have to do with age more than anything.

Welcome Back Or Boot In The Ass: There’s no boot in the ass option, and as Lester’s salary drops to $20M this year it’s not really egregious at all for what he will most likely be. You can do a lot worse in the #4 or #5 spot in the rotation than what Lester looks lined up to provide, and seeking it on the open market would probably still cost $12M-$15M anyway. So an extra five or so isn’t really killing the Cubs, though that won’t stop them from claiming so. Lester isn’t going to make 200 innings, as he hasn’t done so in three seasons now. He may want to, and he may try and pitch through some stuff to get there, but that will only make things worse. And maybe one bonus of having David Ross as manager now is Lester is less likely to either want to or be able to bullshit his way back to the mound if something on him is barking.

The question is whether Lester can be anything more than a competent seat-filler at the back of the rotation, and if the Cubs will need more than that depending on what they go and get to fill it out, if anything. The declining stuff can’t be gotten around, and it’s not like Lester is some loaf who can invent a new offseason training regiment or something. He’s already a tireless worker. This is just what happens to pitchers in their mid-30s who have logged these miles (2500 career innings). It would appear Lester’s plan of attacking hitters on their hands just isn’t going to work anymore, because he simply can’t get in there with the velocity or movement he has. At least he can’t in the strike zone. Maybe he can tweak that cutter to get a little more movement, but we’ll have to see on that one.

Lester has a decent enough curve, but he’s not going to be Rich Hill and snapping it off nearly half the time. Perhaps Jon needs to hone in on the outside corner, and as soon as hitters begin leaning out there can surprise them with the cutter in instead of using that as his main office.

Whatever for Vaughn. The Cubs can’t count on anything more than #4 production from Lester, and plan accordingly. That said, this being his last year in a Cub uniform should be something of a love fest for him. It was his signing that signaled the Cubs were ready for deep shit. It was he who pretty much dominated the 2016 playoffs, staring down Johnny Cueto first, keeping the Dodgers at bay twice, and then gutting out six innings of one-run ball in Game 5 against the Tribe when the Cubs had no choice. He’s been more than just a loyal servant and usually found a way to give you something even as his stuff and health have slipped. He was definitely a tone-setter in the clubhouse as one of the few players who had been around a lot.

Yeah, he got a lot of money. I doubt there’s a Cub fan worth a shit that would do that contract over, though. 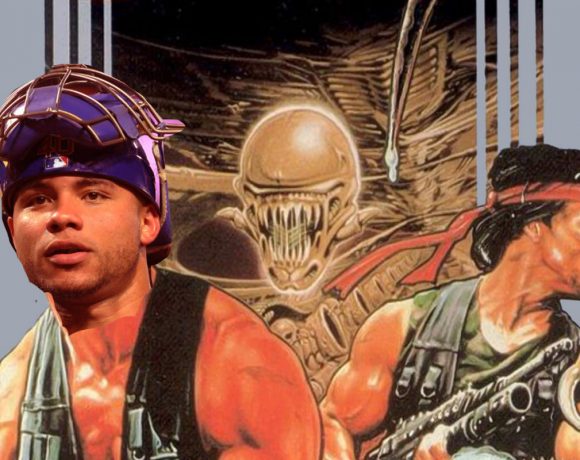 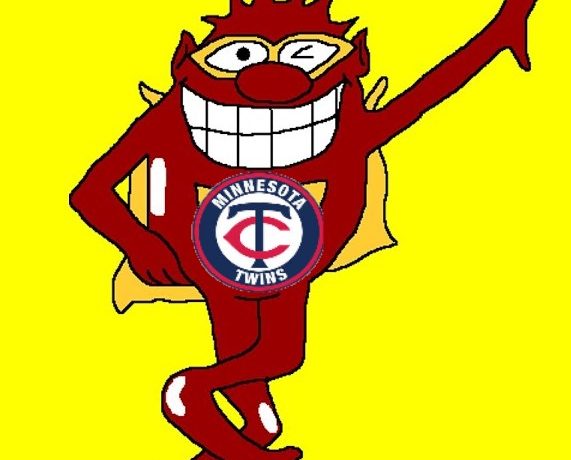 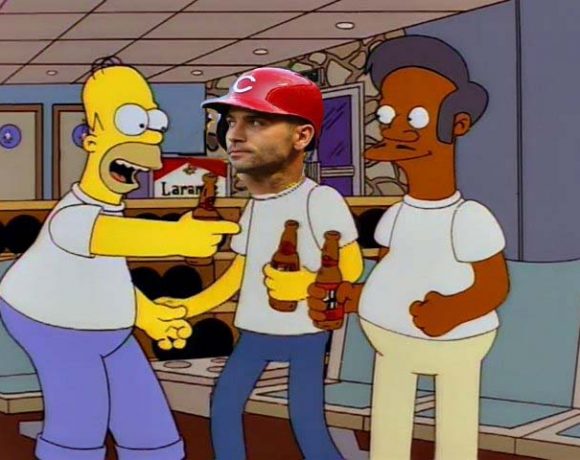