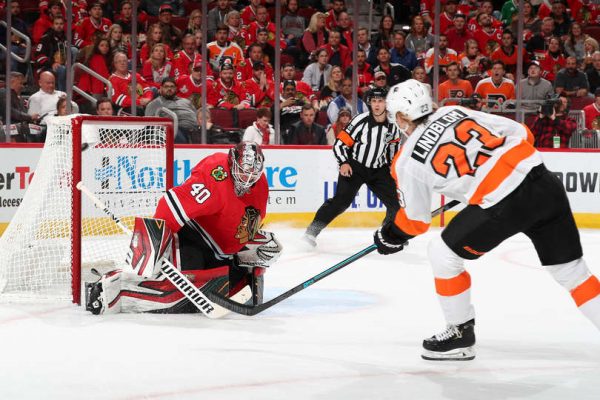 The fact that the score isn’t two goals worse for the Hawks should be cold comfort. They got the benefit of the hockey version of VAR thanks to Captain Stairwell being offsides not once but twice and having goals called back for it, but make no mistake, the Hawks played like shit. And they got the result they deserved.

–I wouldn’t necessarily say that the Hawks’ defense has been GOOD thus far, but over these last few games they were much less awful than what we’d become accustomed to. Tonight that all fell apart, with our Large Irish Son out with a broken crotch, Calvin de Haan taking his place with Duncan Keith, and Fetch Koekkoek back in because REASONS. With Adam Boqvist still putting his face back together we can’t be surprised that Koekkoek and Gilbert were the best the Hawks could come up with, but that doesn’t make tonight’s performance any easier to take. On the first goal (that counted), Keith got completely pantsed by Travis Konecny, and then de Haan just watched as Oskar Lindblom skated past him and scored. Seabrook did Seabrook things, including getting completely burned by Captain Stairwell on the third goal after Saad turned it over. Gustafsson had an atrocious turnover that led to van Riemsdyk’s goal—it was a hot mess.

And let’s be clear, just defensively in general the team was piss poor. Obviously the actual defensemen were shit but the forwards weren’t doing anything better, and the abject failure to handle their own blue line was remarkable. In a bad way.

–I wanted to say that the bright spot was Brandon Saad, and in a way it was because his goal was really good. Kirby Dach created the chance and Saad found the perfect opening, and he finally finished. He’d had another point-blank chance in the second but missed the net badly, so it was good to see him score and overall he played well. His line with Kampf and Kubalik even came out strong. But then his turnover that led to Hayes’ goal was pretty much the backbreaker. So even that silver lining has a cloud.

–Beto O’Colliton hit the blender pretty hard but it didn’t matter and it didn’t even make much sense. I think at some point Shaw was with Dach and Kane? 20-64-8 got split up, which, OK maybe we’ll need to do that but let’s think it through, not just plop Kubalik on the left side suddenly. Also can we never see Drake Caggiula and Patrick Kane together again? It wasn’t meant to be that way but it was still frustrating and sad. Tonight was all process and no plan.

–Robin Lehner deserved better. His .826 SV% looks terrible but it’s hard to pin any of the goals on him (I’m trying to decide on one and failing to do so). It’s too bad that after an excellent performance against Vegas on Tuesday and making some highlight reel stops again tonight on oh so many breakaways, he’s 0-2. At times he was visibly pissed and honestly I would have been too.

–Erik Gustafsson sucks. Get this, he had a 71 CF% at evens tonight and I feel like I’m taking crazy pills because I saw how badly he played, so why are numbers lying to me? Once Boqvist gets his teeth glued back in his head he needs to replace Gus and this bullshit needs to stop. Maybe we can still find a moron to give us something more than a bag of pucks for him since it’s still early?

Overall it was a flat, shitty performance and we have to hope that maybe getting the hell out of town for Saturday’s game will help. I’m not too convinced, but we’ve all got to tell ourselves something, right? Onward and upward…