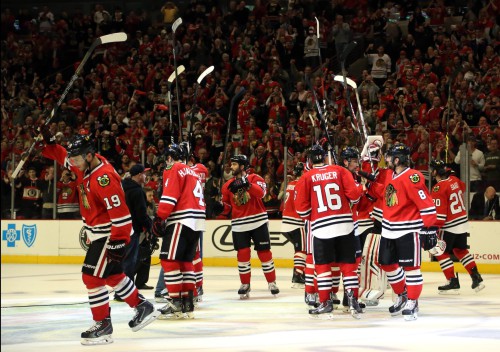 Looks like we’re going to have a few days to kill and clean up whatever’s lying around after Sunday’s snuffing of River Scum. So just some points I wanted to get through in the wake.

-I didn’t really have any numbers to back up just how good Duncan Keith was yesterday. I checked them out today. Thanks to Ryan Lambert’s “What We Learned” on Puck Daddy as well for pointing this out. Keith had a 60.6% Corsi-percentage in a game where his team didn’t come close to winning that battle. Even Toews got his head kicked in in terms of possession. Keith’s Relative Corsi Percentage was +27.3%.

Interestingly enough, Keith saw most of his time with Saad, Kruger, and Shaw, and it’s no coincidence that that line had its best game of the series, culminating in the last two goals. Perhaps this was a ploy by Q to get the bottom of the roster going. Or maybe that’s just how it worked out.

Keith also was deployed against Tarasenko and Schwartz. It says they combined for five shots. I certainly don’t remember any of them so I’m guessing they all came on the PP. And look, that line didn’t score, and the Blues are done playing hockey for the season. Easy how that works, no?

-McClure pointed this out to me just now, but after Game 2 Corey Crawford was not only called out by his coach but by himself. Yet another infuriating aspect of this town’s reluctance to embrace Crawford is that the guy has never hidden or taken it on the chin. Compare that to Goth Superstar Ryan Miller refusing to talk to the press after Games 3-5. Anyway, after doing so Crawford went on to allow six goals in four games, pretty much winning Game 3 on his own and holding the Hawks level by himself in Game 6.

Here’s a list of goalies Crawford has better career playoff numbers than: Henrik Lundqvist, Jonathan Quick, Tuukka Rask, Roberto Luongo, Pekka Rinne, Ryan Miller, and equal to Martin Brodeur in GAA and SV% (but obviously not Cups),  This is over 43 playoff games, which may not be the largest sample ever but is certainly healthy. So yeah, I’m fucking done with this debate.

-I’m not really done harping about a 4th line, though. Especially if the next series is playing three or possibly four games at altitude against perhaps the fastest team in the league, you can’t really just play nine forwards.

I also dispute the easy notion that Michal Handzus’s work on the PK makes him invaluable. Because that doesn’t hold up if you really look at it. It’s easy for everyone to see the flying shot-blocks and hear the crowd chant his name. Everyone can identify that, just like everyone can identify a really fast player.

The Blues scored two power play goals in this series, one in the dying seconds of Game 2 with Hossa and Toews out there. The other was in Game 4 when Handzus lost a draw and Tarasenko quickly made him pay for it. So you can make the argument that Kruger, Smith, Toews, and Hossa have been just as good on the PK as Handzus, and they all provide something at even-strength. And I just believe that if Handzus were replaced on the top PK unit by Smith, you’d hardly notice the difference.

That doesn’t mean I expect to see Zus out of the lineup, and I’ll come to terms with that. But the Hawks have to find a way where he can take a semi-regular shift at evens and not get destroyed. Maybe it’s not even possible. One way to help would be to finally wave the white flag on Bollig. It’s not even me having this argument any more. Q played him two minutes. Two! He’s telling the world he sucks, so why do I have to?

-I don’t know where your allegiances should lie for the end of this Wild-Avs series (I have this hunch that the Avs are going to biff the Game 7 at home but not enough to wager on it, let’s say. I would wager that Minnesota will benefit from some generous calls tonight, though). Obviously, the Avs are detestable in a lot of ways, and there would be some satisfaction in watching the Hawks pop this balloon once and for all. But that horseshoe is so deeply lodged in their rectum now they may be closer to spitting it out than shitting it out, and who knows when that stops?

Minnesota isn’t quite the batting practice fastball they were last year, especially with Granlund and Coyle and Haula playing this well. It would be harder than you think, but probably not hard enough to get the heart to flutter. But I’d rather see that than some inexplicable force of luck that there are no answers for, I think.