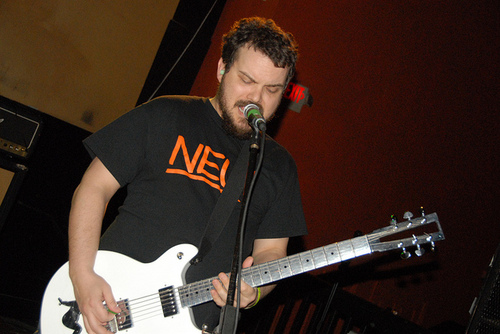 On yet another off day, and a Tuesday at that, it’s more than likely that an infusion of energy would be more than welcome. Fortunately the band Torche and bearded frontman Steve Brooks are more than up for the task.

The metal outfit Torche formed in Miami in 2004 after the members previous projects all fizzled out in one form or another. The sound that Brooks and Torche would land on themselves would end up being a combination of melody and a thunderously low end of bass and drums, along with a bit of a surrealist sense of humor to go along with it. And with the bearded Brooks’ vocals evoking some of blog favorite Bob Mould’s signature mid-range drone the bands three full length releases (along with a host of EPs) since their inception have all been must listens for those seeking out fun and energetic metal.

And though it’s largely an immaterial fact, that Brooks is an openly gay man in a scene historically and overwhelmingly dominated by heteronormativity gives an even fuller perspective on just how capable Torche is as a whole of injecting life into even the most staid of genres, let alone an otherwise quiet Tuesday.