Twins Spotlight: Buxton, Polanco, And All We Need Is Just A Little Patience

The Twins sit eight games clear at the top of the AL Central. While they have been predicted to compete for a couple years now, surging to the front with authority was not predicted many places outside the State of Hockey. Sure, it helps that Jose Ramirez and a few pitchers in Cleveland died, but the Twins look to have arrived.

Two big reasons the Twins are up there is Jorge Polanco and Byron Buxton. Polanco has a case for AL-MVP-Who’s-Not-Trout division, and Buxton is making good on the promise that most thought had gone to waste. A difference in approach with the rearing of the two is apparent.

Hard to believe, but Buxton is appearing in his fifth major-league season. He came up first when he was 20, which some do but is a big ask for just about anyone. Before being called up, Buxton only got 13 games at AAA and 59 at even AA. So he was pretty damn green. He got an additional 49 games at AAA the following year, but he was up full-time after that. Buxton has always been a positive player purely on his defense in center, but his offense has finally joined the party this year, after some thought it never would.

Polanco would also appear briefly in the majors at 20, but that was only for four games. He spent all of 2015 in the minors, where he got 95 games at AA and another 22 in AAA before another cameo in the majors. In 2016, Polanco received another 75 games in AAA, which is far more than Buxton ever got. Polanco never quite struggled at the plate in the majors the way Buxton did at times, but both have exploded this year, especially Polanco.

Polanco’s 27% line-drive rate is top-20 in MLB, and his 41% hard-contact rate will get it done as well. Polanco’s been especially dangerous on off-speed pitches this year, crushing curves and change-ups like never before. That’s probably a product of a new alley-to-alley approach, as a jump of nearly 10% more of his contact going up the middle.

Buxton seems to be the latest member of the Launch Angle Cabal, raising his fly ball rate nearly 20% over last year and 10% over his career norm. He’s on the other side of the spectrum, pretty much selling out to turn around fastballs and susceptible to breaking or slower offerings. And as you can see from the zone profile from what he’s doing with fastballs in his career vs. this year, he’s dead-set on lifting lower ones: 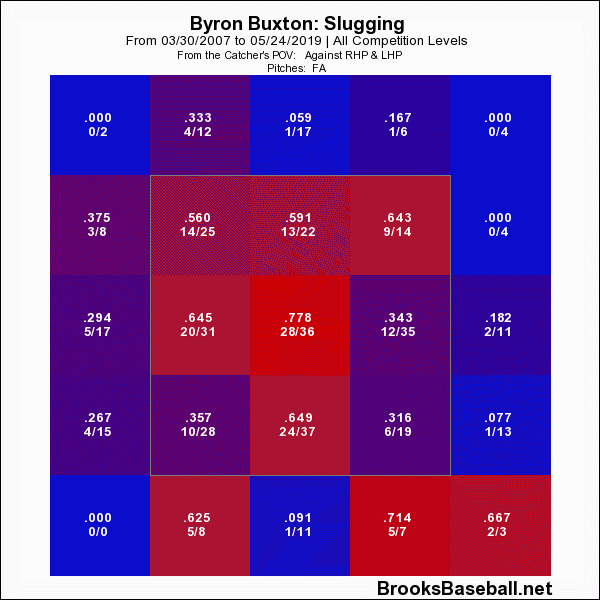 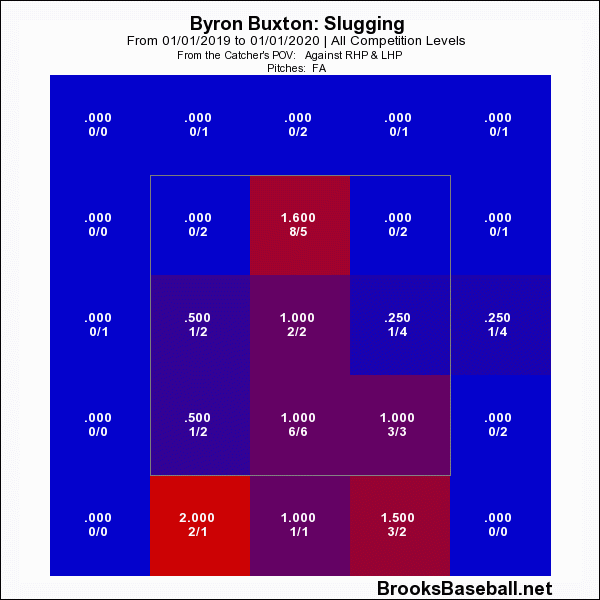 Either way, the Twins appear set up the middle for a long time to come. Good thing Hawk isn’t around anymore to have the Twins continually break his heart, even if it takes place outside now instead of in a garage.