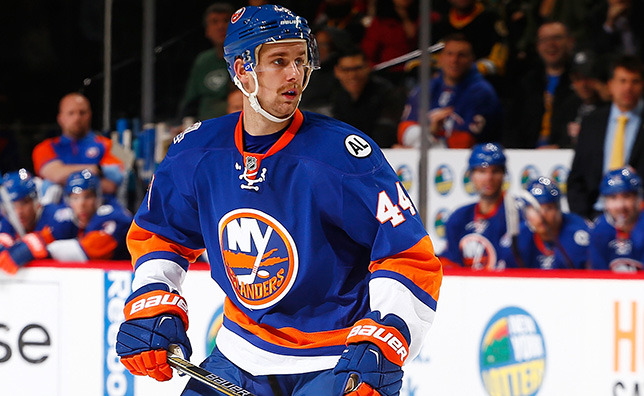 As we continue to take a tour of the NHL’s free agency market, we come to a d-man that has been rumored to be high among the Hawks’ wishlist. He’s also one that’s not going to get the pulse racing for any fans, and that just might be why he’s on the Hawks’ radar.

Short of trading for Justin Faulk or Erik Karlsson, the Hawks aren’t going to be able to find a top pairing d-man. Which means they can’t fashion a typical top pairing. Which doesn’t sound great, and it isn’t. But that doesn’t mean it has to be fatal. The Hawks might be better readjusting their sights to raising the floor of the blue line instead of the ceiling. The Caps just won a Cup with two pairs at the top that were basically the same. So while the Hawks might not have a your normal #1 and #2, maybe they can figure out three second pairings or something like it.

Nothing stands out about de Haan, other than he’s got some funky capitalization. He’s got decent size at 6-1, 198, but isn’t a plodding bruiser. For that size, he’s a plus skater though that doesn’t translate into dynamic offensive play. He probably would infuriate some in the Hawks’ front office by not playing to that size, but his skating ability and good eye for a first pass diffuses a lot of that. He’s not going to jump in the play and blast home slappers on the break, but he can spring the team the other way.

There also might be some diamond-in-the-rough possibility here. Last year, de Haan only played 33 games last year, and spent most of his season with Adam Pelech. Pelech is all kinds of promising but had some growing pains, and they were both playing under Doug Weight whose defensive system would be politely described as “anarchy if it was even that existent. Two years ago de Haan had to drag around the corpse of Denis Seidenberg for a whole season. If you go back three seasons when he was paired with a still useful Travis Hamonic, he was a pretty useful player taking on top assignments for a playoff team. He wasn’t dominant possession-wise but ahead of the team-rate with the hardest assignments. It’s been a while, but it’s still there.

de Haan is only 27, so he’s not out of his prime yet. As for cost, he made $3.3M against the cap last year, and coming off an injury-ravaged season he might be hard-pressed to get more than that. There’s also plenty of other mid-range defensive options for teams, which also might keep his price down, like Toby Enstrom, Mike Green, Jack Johnson, John Moore, and others. He’s certainly not getting more than $4M, which the Hawks can fit.

It’s still something of an odd fit. de Haan is lefty but has played the right side, so you could conceivably pair him with Keith. He’s certainly got the mobility to cover for the mobility that Keith has lost. If he doesn’t play there, he could play with Murphy though it would lack a little get up and go, though might look something like his pairing with Hamonic from the past. But then there’s no one to play with Keith, without another move. Conceivably you could pair him with Gustafsson if you’re buying Goose as a top four on this team, but boy is that a leap.

It’s not the sexiest option, but it’s an option.