There Goes Your Manning 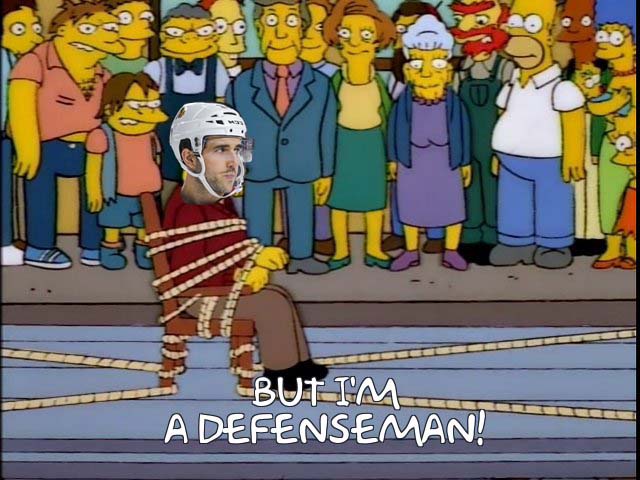 I’m sure it was only a coincidence that the Hawks completed and announced a trade of perhaps their most bewildering signing in a decade during the last Bears regular season game. Wouldn’t want anyone to notice an admission of a stupefying and yet comedic mistake of this proportion.

The headline is the Hawks traded Brandon Manning and failed prospect Robin Norell to Edmonton for Jason Garrison and Drake “The A.K.” Caggiula.

The Brandon Manning signing sucked when they made it, but we tried to reassure ourselves he was only a bottom-pairing player and really couldn’t do that much damage. And then he played, and somehow the signing looked significantly worse than we thought it would. Then he blamed it on the system Joel Quenneville employed. When the coach and system changed, he still sucked. Then his GM blamed his signing on the coach he just canned. And when Manning finally played himself out of the lineup, he bitched and moaned until he got traded. Perhaps the most infuriating part of this whole thing was that nothing was ever Manning’s or Bowman’s fault for his acquisition or play.

Take a moment to consider all that.

Manning was a continuation in a war between Bowman and Quenneville that went on for far too long, and it looks like both will eventually lose. Michal Kempny was the big battlefront in it, which has caused Bowman to re-sign Jan Rutta and Manning while basically saying to Q, “Fine, you can have your type of player. Good fucking luck.” I wonder if it doesn’t go back to Trevor Daley, who is utterly terrible and always has been but the similarities are there. Bowman desperately wanted anything to show for having to give up Patrick Sharp and also Stephen Johns just to get rid of Sharp’s contract. Daley was also unhappy under Q and his system, and his play showed that. And he wasn’t shy about telling people, even though he was always a cowboy laced on meth when it came to his defensive play. And the Hawks had to give up on him barely halfway into his first season here because it was just that bad.

We’ve seen this before.

In the end, the Hawks were always going to be bad and Manning only cost them some money, and some bleeding eyeballs at his play. Maybe they could have believed in Carl Dahlstrom more and let him just start the year here, but these things aren’t always linear. At least it’s over.

They get back Drake Caggiula, a player they wanted to sign out of college and made a push for. He’s at least not a complete suckbag, though close. He did manage 13 goals last year. You’d probably rather see him take fourth-line shifts than Andreas Martinsen or John Hayden, who gets an abnormal amount of ink spilled about him for someone who can barely do anything. That’s about the ceiling for Caligula. Jason Garrison is on a minimum deal for this season and we’ll never see the light of day and will probably be waived tout suite.

While the Hawks will tell you it clears up their defensive logjam, it really doesn’t. When Henri Jokiharju comes back, they’ll have seven d-men and various arguments about why they all need to play. Certainly Dahlstrom’s play doesn’t warrant him sitting regularly. Jokiharju has to play. Murphy’s been their best d-man by miles. You’re not going to sit Keith, who seems to have found some reasonable understanding with Gustafsson, no matter how little sense it makes. Which leaves Forsling and Seabrook. Forsling is terrible and awful and bad and stupid and sucky, and if never plays again I’lll consider it a brief ray of light in an otherwise ceaselessly dark existence, but the Hawks are still under the impression he needs to develop and at least see what they have. He can’t do that from the pressbox. Which means they’re headed for their Seabrook Nexus Of Death faster than they would like, I’m sure.

All in all it sounds like a really healthy organization we’ve got here.