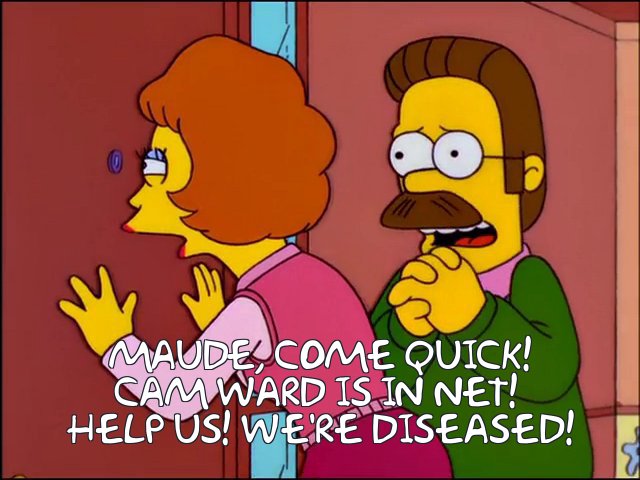 After a season marred in large part by bad goalie play after Corey Crawford went down to injury, the Blackhawks decided to attempt to address their bad backup goalie problem by signing…. a bad backup goalie. Cam Ward probably wasn’t the worst option available on the market, but he wasn’t exactly far from it.

A Brief History: Cam Ward has had one of the cushiest gigs in professional sports over the past decade, as he has been living out the true American Dream of making a lot of money to be not that good at his job. He’s done that by living off the glory of a Stanley Cup win in 2006 as a rookie, despite the fact that he was pretty much dogshit during that regular season, posting a .882 SV% in 28 games that year.

In an attempt to be fair to Ward, it’s probably not all his fault, as Bill Peters system is well known for hanging the goalies out to dry in the attempt to control possession. Still, GSAA at the very least makes an effort to adjust for outside factors, so the information that is out there about Ward is still not encouraging.

It Was The Best of Times: The ideal scenario for both Ward and the Blackhawks is that Ward doesn’t have to come off the bench more 30-35 times, ideally against bad teams. Maybe in limited outings Ward will be able to find some of the game that he showed earlier this decade rather than what he’s been showing recently. Quennville’s more risk averse system should at the very least take bit of the pressure off Ward’s shoulders that he’s been felt in Carolina, while perhaps giving him a bit more confidence. Even so, in a backup goalie you could do a lot worse than a guy hovering around .910, so if Ward gets in that range it could keep the Hawks in games even when Crawford isn’t there to bail them out.

It Was The Worst of Times: Believe it are not, there are pretty much two worst case scenarios here. On the other end of spectrum of possibilities to what’s above is that it turns out Ward can’t stop a puck unless he’s getting frequent playing time, and resorts back to the player he was early in his career and not even stop 90% of what’s thrown at him. If Ward turns into Swiss Cheese in net whenever he’s in there and can’t even give the Hawks a fighting chance in the games he backstops, the classic Stan Bowman NMC is going to really bite this team in the ass unless they can find a way to make up an injury and try Forsberg again.

The other worst case scenario is that Corey Crawford is no longer good or his brain is mush after all, and Ward turns into your starter. Sorry, but this Blackhawks roster with a .905 goalie behind them is probably gonna have top-3 odds at Jack Hughes next spring.

Prediction: I am awful at predictions, but I will use Pullega’s Crow prediction as a baseline for mine. If Crawford does come in and only miss 10 or so games before coming back and being his old self, Ward will do just enough to help the Hawks survive Crow’s brief absence without falling apart, then turn into a dependable-but-not-impressive backup goalie, which really is how all backup goalies probably should be.