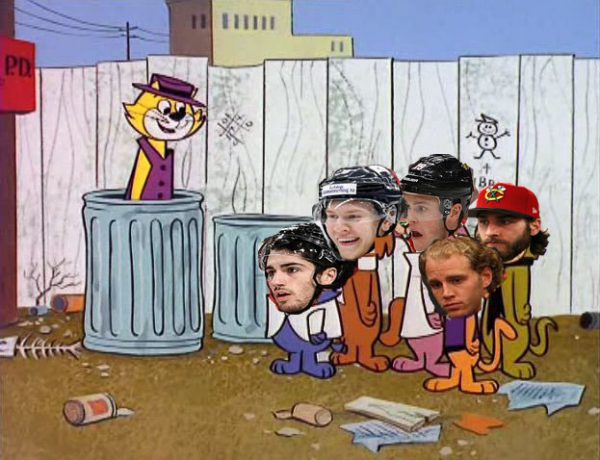 Following on yesterday’s hopeful theme, one of the other bright spots from last year was obviously Alex DeBrincat, affectionately known as Top Cat around these parts. Despite his coach’s best efforts to keep him off the team, and then thwart his development once there, Top Cat blossomed into the latest version of our Special Boy. So what does sophomore year hold?

A Brief History. Along with Nick Schmaltz, DeBrincat was the breakout star of the season. And Top Cat may actually take top honors in that category because he was the leading goal-scorer. And he did it without playing on a line with Patrick Kane. DeBrincat led the team in hat tricks, with three (how meta); had the second-highest shooting percentage at a muscular 15.5 (behind only Schmaltz’s aberration); and his line’s possession numbers were the strongest on the team, although DeBrincat’s zone starts were incredibly sheltered, it must be added. However, if you control for guys who played less than 41 games (i.e., didn’t play at least half the season so getting discarded in my very scientific opinion), Top Cat’s 54.3 CF% at evens is fourth best, and guess who was ahead of him? Linemates Jonathan Toews and Brandon Saad (and Vinnie Hinostroza, sky point).

And let’s not forget—let’s NOT forget Dude—that Top Cat was shuffled around with subpar linemates while Quenneville tried his damndest to find a reason to be off with his head. DeBrincat was moved to the opposite side and got stuck with the likes of Lance Bouma as well as Patrick Sharp and Ryan Hartman. No, I’m not comparing even about-to-retire Sharp with Lance fucking Bouma, but none of these were appropriate linemates for Top Cat’s speed and passing. Despite Saad’s rough year and Toews’ ongoing decline, their line was definitely not painful to watch, notching 8 goals and an impressive 67.4 CF%.

It Was the Best of Times. In an ideal world, everything comes together and Top Cat remains effective on the right side because if he’s going to play on the top line, it’ll be in that capacity, that much is clear. And he should be on the top line—he’s one of the most gifted scorers on the team and I’m kinda being generous to some of the other players by saying it that way. In the best-case scenario, he has a 70-point season, helping to spark a Saad renaissance and extending Toews’ usefulness. He can make the jump from promising youngster to legitimate elite top-6 scorer.

It Was the BLURST of Times. There are a couple worst-case scenarios to ponder, unfortunately. So far, Chris fucking Kunitz has been seen on the top line with Toews and DeBrincat, which is so utterly stupid and utterly Quenneville-ian that it defies the capacity for logic. Yes, let’s put a useless, aging, bottom-6’er on the top line with an already-slowing center, entirely wasting DeBrincat’s abilities. Another potential situation is that he falls victim to Q’s machinations and gets marooned on the third line with Anisimov and whatever other oaf ends up there—could be Kampf, could by Hayden, really a race to the bottom in terms of options for DeBrincat, while Kunitz is this year’s Tommy Wingels, i.e., no-talent asshat on the top line because REASONS. In this scenario, physically unable to skate as slowly as these fools, Top Cat unsurprisingly struggles to score, which becomes a wretched feedback loop of Q claiming he doesn’t deserve to be on the top line, and so he doesn’t score, and it goes around and around. This sophomore slump entirely of the coach’s making makes him eager to get the fuck out of here and play for a team that recognizes his talent, while at the same time the front office obliges so that they can bring in yet another useless, aging veteran because they decide that GRITHEARTFART was what their forward corps was lacking.

Yet another nightmare scenario is that Top Cat doesn’t keep his head up and some Neanderthal decides to CHANGE THE MOMENTUM in a random game and demolishes him, since even if he can put on some bulk he will not conceivably be able to put on any more inches, and he ends up concussed or with a liquefied knee. (If Niklas Kronwall so much as blinks at him I’m going to hunt that fucker down, I’ll tell you that right now.) Either way, whether by misuse or abuse, should one of these situations come to pass this city would see yet another talented youngster provide flashes of brilliance before having it all ripped away.

Prediction: I can only hope to be wrong about the injury thing. I’m going to tell myself calm, soothing words and just say that won’t be the case. As for Top Cat’s place in the lineup, I think he’ll earn his spot on the top line and he’ll click with a resurgent Brandon Saad.  It’ll take a few weeks of dumbfuckery as Q tries to make the Kunitz experiment work, or Saad-Schmaltz-Kane works out for a while so they genuinely have to play someone else on the top line. DeBrincat will lead the team again in goals, this time over 30, yet probably have some wobbly patches throughout the season when Q wants/tries to demote him, and Top Cat has to play his way out of trouble every time. And he will. Because he’s our Special Boy.