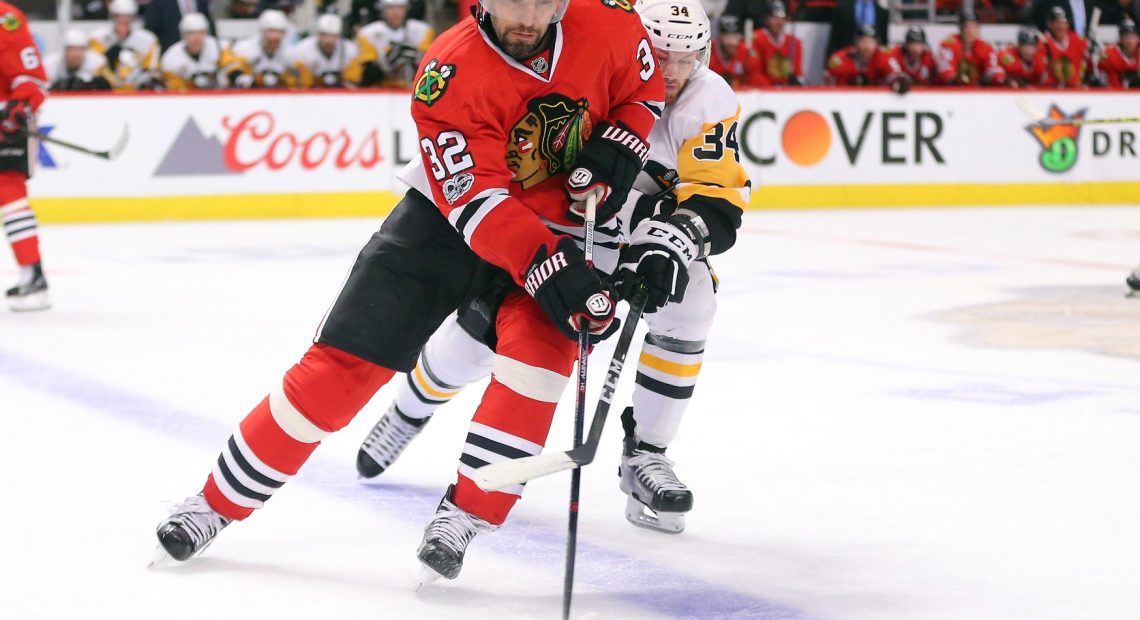 The recently re-acquired Johnny Oduya practiced with his new/old team for the first time this morning, but in his mini-presser post practice, Joel Quenneville indicated that Oduya would be held out for the next two games this weekend to give his ankle a bit more rest. His return would coincide with the scheduled return of Niklas Hjalmarsson, who is battling a mystery upper body injury at the moment. Keeping Oduya out congruently with Hjalmarsson (who in all likelihood would be playing if it were the post season) not only gives a 35 year old defenseman with serious miles and a lingering injury a bit of bonus rest with the Hawks not playing for four days after the Preds game, but as was stated upon Oduya being reacquired, it allows Quenneville to not have to jumble pairings with staggered return dates, as it was pretty clearly stated that Oduya was brought back with the intention of playing with Hjalmarsson and taking the top matchups the other team has to offer. And in last night’s game, Q put on display what he feels his pairings are going forward. Keith and Seabrook were reunited, with TV-Ow-My-Balls and Brian Campbell forming one third pairing, and the the Mike Czech (GET IT) pairing of Rozsival and Kempny forming the other. Once Swedish Ebony & Ivory return, it’s likely the Czechs who are in the press box, but Quenneville loves having options in the playoffs. Furthermore, in conjunction with his “extension”, getting Rozsival two more games worth of action will allow him to be exposed for the expansion draft.

This all speaks to a team that has all but realized that it is locked into its current playoff position, being effectively 10 points ahead of Nashville (12 with one more game played), and 9 points behind Minnesota and 20 or less to play, they are setting things up as optimally as possible now that the rosters have all been settled. Now there is a chance that during next week’s mini-bye that Minnesota biffs their home games against the definitely NOT selling Blues and the Sharks, setting up a key brunch matchup at the United Center next Sunday, but because Bruce Boudreau has the only team that really gives a shit right now, that’s not likely to happen. The main thing now is to watch for the quality of play and health with regard to the Hawks.

As far as what happened elsewhere in the league yesterday, it was a pretty tame deadline overall, with no real seismic shifts happening. The Penguins loaded up on the blue line with stat cretin dreamboat Frank Corrado coming back in a salary dump of Eric Fehr, and Mark Streit coming from Philly via Tampa in some admittedly deft cap management from BRAIN GENIOUS Steve Yzerman. As was on display last night, the Penguins have no idea who is going to be healthy and playing well among their defensemen once the games start to really matter, and with the only real blue line prize in Kirk Shattenkevin going to the Capitals giving them another rushing right handed defenseman on top of Carlson and Niskanen, Jim Rutherford figured he’d try to solve the issue with quantity. And it would be some horrible Irish literature-esque twist to for Ron Hainsey to finally be on a playoff team but end up being scratched once they got there.

Ever the iconoclasts, the Canadiens decided to bulk up while everyone else in the conference is faster, swapping Smurfs David Desharnais and Sven Andrighetto effectively for Brandon Davidson and Dwight King. None of it really matters, as they’re only getting as far as Carey Price can hold up for, regardless of the fact that they now have an actual adult as a coach. The Florida Panthers acquired Thomas Vanek for a third round pick, which is hilarious both in that somehow everyone thinks the Cats are poised for a deep run despite having fewer than 20 regulation wins, and that Wings fans are so unfamiliar with what selling off at the deadline looks like that they were rending their garments over the lack of a return on a 33 year old on a “Prove It” deal who had a shit reputation, could never really skate, and was having a mediocre year anyway. High comedy indeed.

Closer to home, the Blues were most definitely not selling and are still in it despite their only deadline move being trading away their best puck moving defenseman (eat shit Colton Burpo) for magic beans and acquiring nothing. The Preds traded for the most Preds forward ever in P.A. Parenteau giving up only a sixth for a 33 year old with 2 goals in 12 post season games in his career. His metrics are fine on a team whose metrics are fine, but it doesn’t change the fact that Pekka Rinne’s hip is still held together with dried snot and prayer candle wax. The Kings acquired Jarome Iginla for almost literally nothing- if they miss the playoffs or Iginla does not re-up with the Kings, the fourth round pick evaporates. This hilariously cratered the market on Radim Vrbata and Shane Doan, who stayed put and are left to have their bones bleach in the Glendale sun for the remainder of the season.

And of course, up north, the Wild have GONE FOR IT in acquiring Diet Anisimov in Martin Hanzal and greaseball Ryan White’s terminal case of Hockey Face. Hanzal doesn’t really do much except be large, and is a decent enough possession player, at least relatively when on a terrible team for the last 5 years. And under the right coaching hands, having both Mikko Koivu and Martin Hanzal to throw at the opposition in order to neutralize top threats would be slightly daunting. However, Bruce Boudreau’s hot fudge coated fingers are not the right hands. For their first game in Minnesota, Gabby stated that it took White and Hanzal “three minutes” to learn his system as if that was a compliment to his new players and not a hilarious self-own. Game 7 at The X in St. Paul cannot come soon enough.