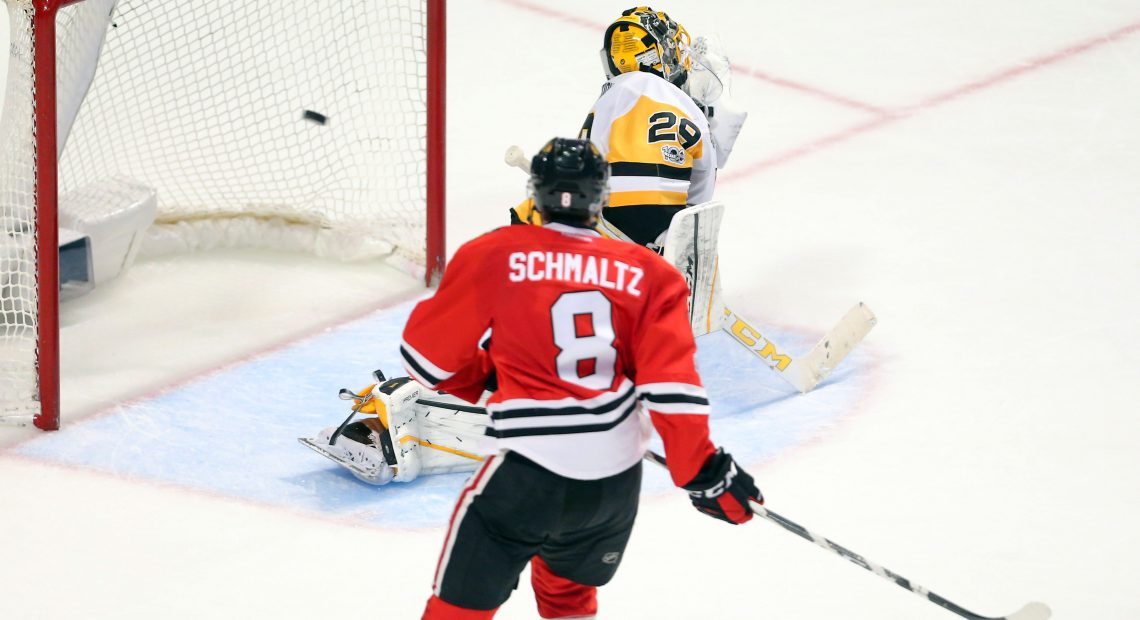 With the Penguins coming off a tough loss in Dallas last night, it should not have been a surprise that the Hawks were going to see their very best. Even if they were dressing Kjell and Ulf Samuelsson on defense because of injuries tonight. You can see why the Penguins are the class of the league and cause matchup headaches for coaches everywhere.

Three lines that can all go 0-60 in under five seconds and a fourth line that isn’t too far behind. Did I mention that all three lines each feature the best (or second best, in PHIL’s case) scorer Canada, Russia and the US have to offer? Yes, this is the dream Final for the NHL of the past decade which almost assuredly means we will never experience it.

And it’s really a shame because this was about as much fun as one can have watching a NHL regular season game in March. Both teams traded high quality chances and both teams traded pinning the opposition in their end for long periods of time.

In the end, the game really came down to two moments. The first one was when Richard Panik postered Evgeni Malkin at the end of the second period by running the puck through his legs and kicking it to himself. This opened a wide gaping slot for Panik as Malkin could clearly not be bothered and allowed him time to pick a corner on Marc-Andre Fleury. Panik certainly didn’t miss.

The second was Scott Darling’s point blank save on the ageless Matt Cullen near the beginning of the third period. How the puck didn’t go in will stump scientists for the next 34 years. With the Hawks running around in their end, the Penguins cycled the puck from behind the net to a wide open Matt Cullen standing five feet away from an open cage. The puck found him and he blistered a one-timer to the net. Scott Darling somehow snagged it with his glove. The Hawks were able to keep their one goal lead and then add on to it later in the period.

Other stuff and things…

–Nick Schmaltz probably didn’t have the fanboy crush of Teuvo but he might be just as offensively gifted as Finnish baby Jesus. After Anisimov missed the majority of the game with an injury, Schmaltz moved to second line center and didn’t miss a beat. He set up the Hawks first goal with a nifty back check/lift of the stick, swiping the puck from Jake Guentzel and feeding a wide open Patrick Kane on the left wing wall.

Kane receiving the puck in that spot of the ice is akin to Lebron James barreling down the lane with one defender in his way. The ball is going in the hoop and there’s really nothing anyone can do about it.

On the Hawks third goal, Schmaltz turned Ian Cole inside out with a toe drag that opened a passing lane for Kane to re-enact his game-winning goal from the 2013 Western Conference Final.

The biggest difference with Schmaltz now versus the beginning of the season is there is a lot less indecisiveness to his game. Schmaltz knows where he’s going with the puck before he makes a play; he’s seeing moves in advance as opposed to reacting after he’s already in position. There are still moments where he gets caught overthinking but they are far fewer than before his trip to Rockford.

–It’s finally nice to be on the other side of a Fels motherfuck. Barring an unforeseen collapse, Richard Panik should eclipse 20 goals. And even if he doesn’t reach that milestone, this has been a wildly successful year for a guy who couldn’t hold a regular NHL roster spot on Tampa and Toronto for the first four years of his career.

The play he made to score his goal is only made by someone who’s oozing with confidence. I highly doubt Panik would have had the stones to try that move at this point last year.

–Speaking of…Tomas Jurco tried a similar gutsy play in the third when he was barreling down the right wing. He tried flipping the puck to himself and fire the puck to the net in one motion. Unfortunately, he got tangled up and couldn’t get a shot off. That was about the only time Jurco was noticeable.

–How the Hawks (the home team) got caught with Michal Rozsival on the ice at the same time as Sidney Crosby on back-to-back shifts will have to be explained to me sometime.

–That’s about that. The Hawks climbed slightly closer to the Wild as they now trail by 3 points with two more games played. The Islanders come in on Friday. Hopefully they’ll get one of Hjalmarsson, Oduya or Anisimov back though I don’t know if they necessarily need them with the way things are going. Until then.