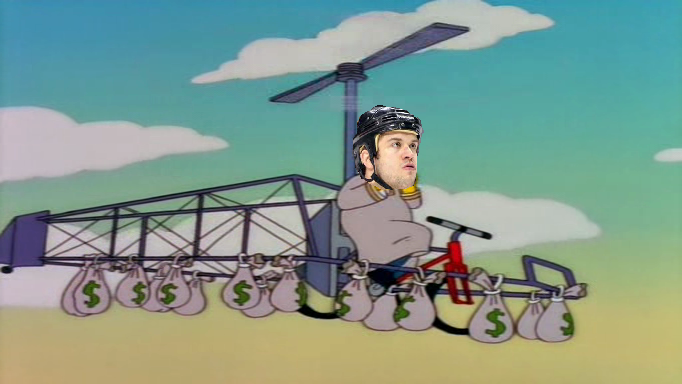 It finally happened. On January 9, in the Year of our Lord 2018, Alternate Captain Brent Seabrook was a healthy scratch for the first time in any of our memories.

This is a weird moment for me and all of us at FFUD. We tend to spend the time that we aren’t pissing in the wind screaming at the ghosts and spirits of what could have been, if only the organ-I-zation had put any sort of forethought into the decisions they’ve made. Losing guys like Stephen Johns, Phil Danault, and Our Special Boy Teuvo were partially the result of the Hawks handing out massive contracts to THE CORE. And while we always sort of understood the Toews and Kane contracts, Seabrook’s has always been a running joke that got less and less funny the worse he got.

So in light of this, I want to talk about a couple of different things that have happened regarding Seabrook recently. It’s important to remember that Seabrook is neither dead, retired, nor likely to sit for long. But this is still a watershed moment worthy of some reflection, if only for now.

Part of the confusion in affect over this healthy scratch is that Brent Seabrook, for a vast majority of his career, has been an integral part of the Blackhawks’s success. He’s played more games for the Blackhawks than any current Blackhawk and ranks fifth overall in games played for the Hawks. He ranks fourth among all Blackhawks for Defensive Point Shares—behind Keith, Doug Wilson, and Bob Murray—and ninth among all active players.

And of course, he’s contributed some of the most memorable moments in Blackhawks playoff history: Whether it was the game winner in the third OT against Nashville in 2015, the series-clinching goal that sent the Wings off to the Eastern Conference in 2013, or yes, his Dr. Katz therapy session with Toews in the box in that same Wings series, Brent Seabrook’s fingerprints are all over the success the Hawks have had over the last decade. It’s really important to note these things because Seabrook has been a leader and has been an important part of the Blackhawks success.

So even though we’ve been calling for it forever, now that it’s here, there’s a sort of hollow feeling. Not quite the end of an era, but something similar, sort of like managing to swerve out of a head-on collision and realizing that one day, everything’s going to end. Or if you’d rather take a less Robert Smithian view of it, it’s like managing to sneak away from a first date for a moment to rip a gigantic fart in the peace of a private bathroom, avoiding the horror of what could have been.

The scratch was our Moby Dick, and now that we have it, all that’s left is a terrifying relief.

That said, this healthy scratch probably came much, much later than it needed to. Recall that the Blackhawks are currently out of a wild card spot and without their Vezina-worthy goaltender. While it would be both folly and tempting to blame all of this on Seabrook, especially following the 8-2 drubbing of the comically bad Senators, he sure didn’t help matters. 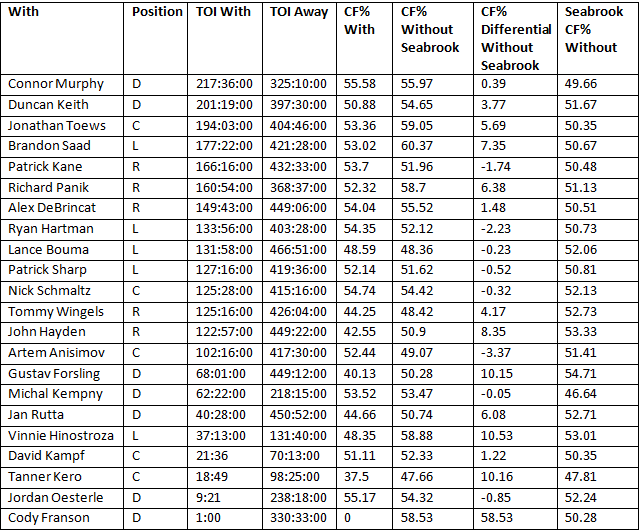 Aside from Kane, Heart Man, and Wide Dick, most Blackhawks are noticeably better when Seabrook is off the ice (5v5). It’s especially troubling when Seabrook is starting more than 56% of the time in the offensive zone. In addition, Seabrook is on pace to score the fewest points he’s ever scored, has a nearly 3:1 giveaway/takeaway ratio, and trails only Duncan Keith—who has been paired primarily with Franson, Oesterle, and, would you believe it, Brent Seabrook—for most high-danger shot attempts allowed at all strengths.

By all metrics and eye tests, Brent Seabrook is currently a bad hockey player. What made it worse was twofold: his personal affront of a contract and the constant drumbeat about his leadership as parsed out by the organ-I-zation.

The Seabrook contract was the bigger brother of the Bickell contract. Coming off the euphoria of a third Cup in six years and one of Seabrook’s best offensive playoff performances of his storied playoff career, the brain trust offered him money they couldn’t afford over years they didn’t have, hamstringing any effort to add useful role players and forcing the Hawks to settle for retreads (Oduya, Ladd, Campbell) and rapscallions (Fleischmann, Wiese, Tootoo) to fill out the roster. But like the Bickell contract, you simply cannot blame Seabrook for taking what he was offered. But that contract, along with his pedigree, was for too long the unspoken justification for trotting him out there despite his inability to do even the things he’s always been good at, passing and shooting.

Watching Seabrook huff and puff this team toward the bottom of the division was confusing at best and outright infuriating at worst. But none of it was quite as infuriating as THE NARRATIVE about Seabrook’s leadership on Sunday.

Whether you’ve read this program after buying it outside the UC, when it was under the SBNATION banner, or have only recently come onboard, you’re familiar with one constant: our outright rejection of and revulsion over THE NARRATIVE. THE NARRATIVE is the way the organization covers for its own miscalculations, hypocrisies, and panic attacks. Whether it’s Crawford’s weak glove hand, Franson as a top-pairing D-man, or literally any excuse concocted to explain the dire mismanagement of Teuvo Teravainen, there’s no problem the Hawks’s brass can’t explain away with THE NARRATIVE. And on Sunday, THE NARRATIVE was focused on Seabrook’s leadership.

Just before giving Anton Forsberg a deserved what-for for giving up a weak five-hole goal, Eddie Olczyk proclaimed that he “loved that play from Brent Seabrook” after Seabrook tapped Forsberg on the pads as each team regrouped. He went on to discuss the importance of Seabrook’s leadership to the team and alluded to his legendary Toews calming during the 2013 Western Conference Semis.

And it all rang hollow, because it’s Grade-A, organ-I-zational horse shit.

In a game in which Connor Murphy—the best D-man the Hawks have dressed over the past two months—was a healthy scratch because, as Mark Lazerus later reported, “It was just his turn,” it was hard to swallow Eddie dedicating any time at all to what amounts to Seabrook being a nice guy, let alone a highlight reel of the pad tap. I have no doubt that Forsberg appreciated the comfort, but of all things for an analyst to analyze, why is it the nebulous concept of the leadership of a player who we all know is a leader by virtue of the “A” on his sweater?

Why is there no discussion of Forsling’s absurd over-commitment on Cammalleri along the far boards, leaving Darnell Nurse all the time and space in the world to crash a high-danger zone? 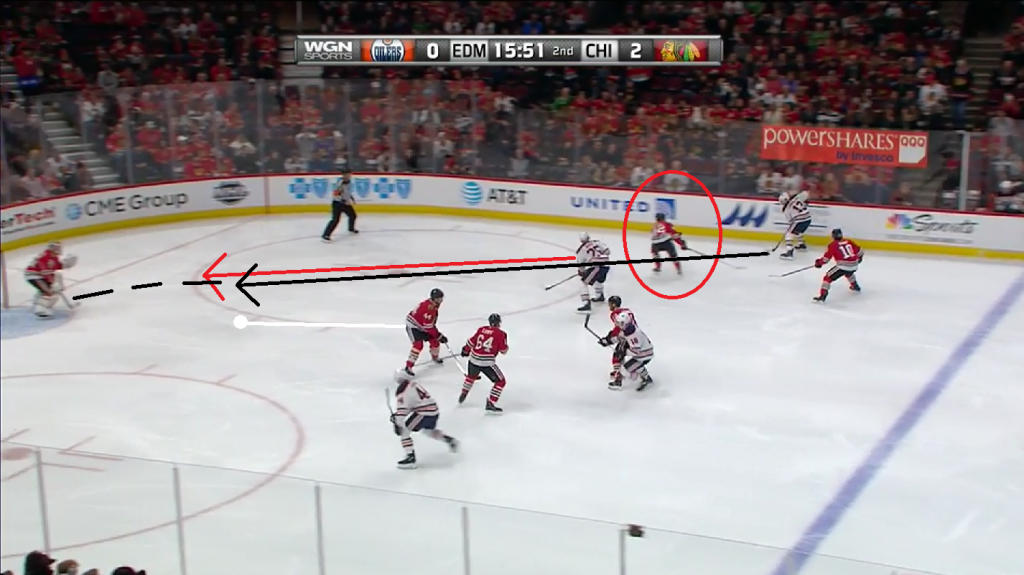 I don’t want to rag on Eddie too much. I genuinely enjoy listening to him most of the time; he’s infinitely more interesting to listen to than Konroyd; and as we all know and admire, he’s doing coverage for the team while fighting through constant chemo. But I’d rather get his thoughts on what Forsling was thinking, not a story about Seabrook’s leadership. Eddie always likes to laugh about bringing his crayons out, and at one of the best times to do it, he cuts to Brent Seabrook tapping Forsberg’s pads. With the McDonough Marketing Machine, there are no such things as coincidences, so what’s the angle?

Seabrook has a full no-movement clause for the next four years, so it’s likely not trade pillow fluffing. Seabrook is one of the longest tenured Blackhawks around, and anyone who’s watched even the bare minimum of Hawks hockey is familiar with the stories of Seabrook’s leadership (e.g., Toews Talk 2013), so it’s not informational. And when you couple this with the tongue lacquering Forsling got earlier in the year coming off his concussion, the lack of analysis in favor of a leadership workshop looks less like an oversight and more like a distraction.

So are we talking about his leadership as though that’s where his sole value lies? If so, there’s a term for guys who can lead hockey players but can’t keep up with the pace of the game: “Coach.” And no one—save maybe the guy who’s having his strip club lunch-buffet tab paid by Jon Cooper after the game—is going to the UC to watch a guy coach.

There’s always going to be an appreciation for what Seabrook used to be. But having Eddie ogle a full replay of a pad tap instead of going back and analyzing the play that led to it reeks of THE NARRATIVE, a way to justify slotting a bad player on an even worse contract over a young and talented defenseman who’s been the primary reason Seabrook has even been presentable over the past two months.

If you want to be optimistic, maybe you look at Sunday as Eddie softening the blow and setting up an explanation for why he was scratched on Tuesday. And knowing the McDonough Marketing Machine and Eddie’s close proximity to the people that make the sausage, that wouldn’t shock me. But at least THE NARRATIVE there would square with Seabrook’s performance and save me the trouble of gluing my hair back on my head after tearing it out watching Connor Murphy sit in favor of Seabrook.

There isn’t one sober Blackhawks fan alive who doesn’t remember when Seabrook gave Toews The Talk during Game 5 of the Western Conference Semis in 2013. It will rightly go down in Blackhawks lore as a prime example of Brent Seabrook’s leadership. When the brass gave Seabrook the “A,” it was much, much less surprising than the Animal Style contract they tossed him just a week or two later. By all player accounts, it’s Seabrook more than anyone else who lifts the team up in the locker room. And when the whole Sharp kerfuffle flared up in 2015, it was Seabrook, rather than Toews or anyone else, who handled the press and commanded the locker room. There’s no doubt that Seabrook is a leader, but this year, his leadership has not been able to mask his odious performance on the ice. Anybody who’s anybody in Hawks fandom doesn’t need to be told about Seabrook’s leadership, and anyone who doesn’t know is going to learn long before the organ-I-zation shoehorns mention of it into whichever marketing piece it drums up next to keep asses in seats.

In a perfect world, Seabrook and Rutta will swap in and out as their stamina dictates going forward, and we’ll get our Keith–Oesterle, Kempný–Murphy, Forsling–Rutta/Seabrook, or some variation thereof. For now, we’ll revel in a true show of leadership, as Brent Seabrook takes a long, much needed healthy scratch for the first time in too long.

The contract doesn’t go away with his, nor does the specter of Seabrook slotting in for Murphy and Kempný in the near future. But for once, all of us who have shouted from the mountains for a Seabrook scratch can rest easy and say, “Maybe we weren’t as crazy as we thought,” while we try to come up with ways the Hawks can trade for Erik Karlsson.