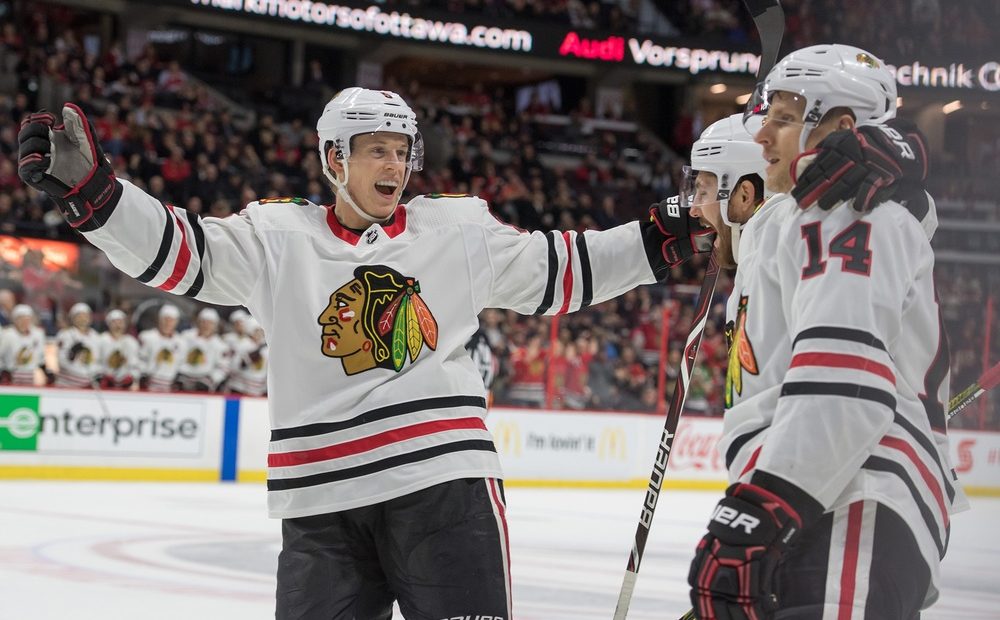 Sometimes you want something so badly that you become fixated on it, you turn the image or idea over and over in your mind, and eventually you build it up into a magnificence that’s totally out of proportion. And when you finally get it, the reality can’t possibly live up to your imagined ideal, and the chasm between desire and result is painfully clear. I am happy to report this situation did NOT happen tonight with my defensive pairing fantasy-turned-reality of Kempny-Murphy while Seabrook sat in the press box. Let’s get right to it:

– I was, dare I say, elated to hear that Seabrook was getting sat tonight. No, I don’t hate him—in fact I have an inordinate amount of affection for anyone on the Cup-winning teams (I know, I know, I’ve bashed him all season but you’ve got to believe me). So honestly, I felt pangs of guilt over how happy I was. And I still feel some now over how happy I am with the defensive play tonight generally. Yes, Rutta got de-pantsed by Duchene in the first, yes, he and Foreskin were scrambling like meth-addled gerbils in the second which led to the first Senators goal, but we knew they were going to pull shit like that. What I care about was that Michal Kempny and CONNOR MURPHY! had, respectively, a 71 and 69 CF% (NICE). Two of the Hawks’ goals included assists by both defensemen on the ice at the time. This was a defense I could live with, even if I’m still confused by Forsling-Rutta (whatever). As my esteemed colleague Adam mentioned earlier today on Twitter, we can make fun of Seabrook and still think good things about him. I’ll be thinking of warm fuzzy memories while he enjoys nachos from the comfort of the press box (fingers crossed).

– Wtf where has this power play been? The Hawks scored three—count ’em three—power play goals tonight, which I’m pretty sure ties their pp goals for the season. Schmaltz had two of them, which more than made up for his rather dismal possession numbers (25 CF%?? Hey, you get a pass tonight, pal!). All the way around, they had better traffic in front of the net, and while the Senators’ PK definitely blows (28th in the league), the Hawks power play actually blows worse (29th). So if this is what it takes to get some creativity and confidence on the man advantage, so be it. Better they’re the punching bag than us.

– I know there’s been a lot of chatter about the Hawks somehow waving a magic salary cap wand and getting Erik Karlsson at the trade deadline, and the merits of this idea are best saved for another time and place, but I can’t get over his dejection at taking a needless interference penalty in the second which led to Rutta’s goal. Karlsson finished the night with a 63.9 CF% so it wasn’t all doom and gloom—he just pulled a great Denis Lemieux.

– Speaking of Ottawa defensemen, I truly forgot that Dion Phaneuf was still in the league. I found he’s still a useless oaf, and I hope he goes away soon.

– Patrick Kane had five points tonight, and apparently that’s the first time he’s done that, which seems odd. It would have been better if Schmaltz had gotten a hat trick instead of Kane getting the 8th goal in the third period, but isn’t this a nice thing to be complaining about?

– Anton Forsberg was solid again tonight. He finished with a .926 SV%, and I couldn’t even hold the first goal against him. The Senators had about 35 chances while Forsling and Rutta do what they do in the defensive zone, and Mark Stone eventually capitalized after about 17 of those 35 chances. Forsberg made key saves when he needed to and he looked confident and well-positioned. Keep it going, guy.

You couldn’t ask for more than a DLR when going through a rapid sequence of games right before the bye week. It’s not only that points are important, which they most certainly are, but the Hawks also need to take advantage on nights like this and beat shitty opponents (check), and some momentum through this week when they’re facing the Jets in a few days definitely helps too. Also, you can’t tell me it’s a coincidence that on the night when the entire team sees that membership in the Circle of Trust actually has limits, they explode like a pimple and score eight goals. Yes, the Senators suck, but the Hawks have played plenty of shitty teams and not had a DLR.

On that note, I’d just like to point out that the last DLR this season was game #1, when I was doing the wrap, and now at the halfway point of the season, as I’m writing the wrap, they do it again. Clearly it’s me, so you’re all welcome.

Beer of the night: Little Sumpin’ Sumpin’ by Lagunitas