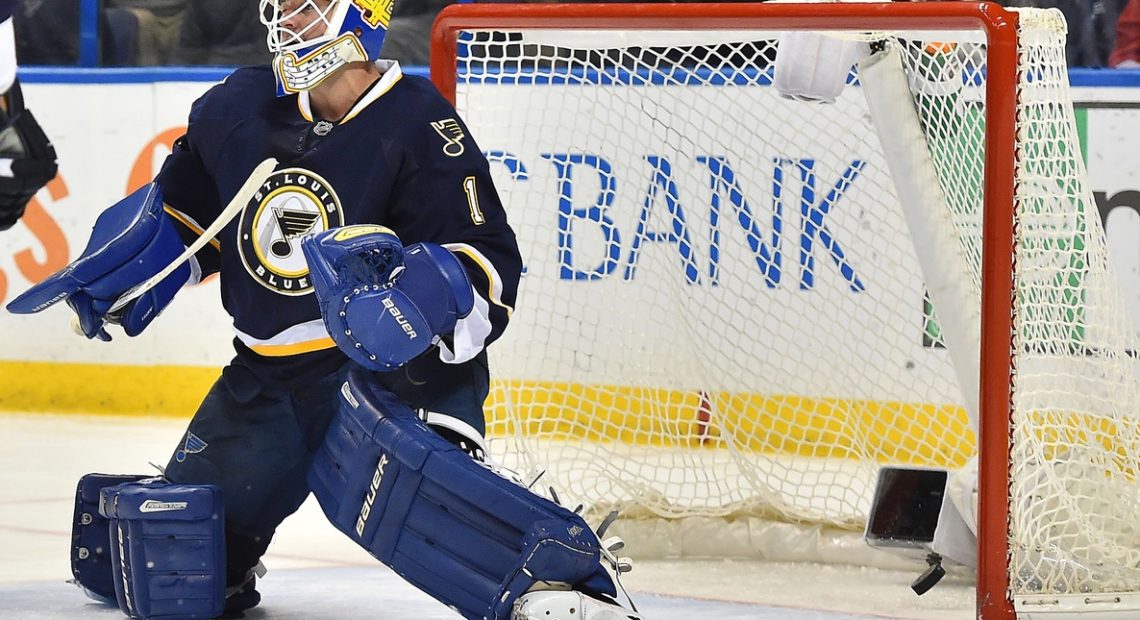 And so it begins anew, and the braintrust of the NHL gets what they ultimately want again with the divisional playoff format with a perennial occurence of legacy NHL rivalries along with an effort to fabricate new ones. The Hawks and Blues will meet in the first round for the second time in three years, with the Blues once again having home ice advantage thanks to their usual solid regular season. But even the florid, toothless cretins along the river are beginning to realize that that type of success and $2.50 gets one on the bus.

Because everything the Blues does is predicated on the prevention of quality chances against, it’s appropriate to take a look at their back end of the blue line and their goalies first.

As a team, the Blues allowed 51.2 shot attempts against per 60 minutes of 5v5 play, which was 8th best in the league for the season. Certainly not bad, but it’s an uptick from the 48.7 mark they allowed the last time these two met two years ago, with mostly the same personnel, or at the very least the same top three defensemen, and those are the three who matter most.

This is the most consistent top pairing Hitch likes to trot out, and they’re kind of a known quantity at this point. Some of the miles have finally caught up with Bouwmeester, who missed time here and there this season after never missing a game in his career. He’s also now 32, and has lost a bit of the wheels to his game. Pietrangelo has plateaued a bit at age 26, despite absolutely looking the part of a #1 defenseman. Both are tall and rangey players at 6’4″, and are deployed against the toughest competition the opponent has to offer, while taking the toughest zone starts, starting a mere 47% in the offensive zone together. However, they don’t really flip the ice as much as a top pairing should in the modern NHL, being slightly below 50% in shot attempts, and allowing more than the team rate (55.67 attempts per 60) in their more than 900 minutes of ice time together. That’s to be expected when they’re taking on top lines every night, but they’re not exactly doing much to make that opposition play more defense than they’d like. When apart, both are above the 50% mark, presumably because they’re let off the leash more against lesser competition. But if the entire Hawks forward corps is healthy, Hitchcock probably won’t have that luxury, and he’ll more than likely opt to put these two in front of Garbage Dick, Panarin, and Anisimov when at home. And their mandate will likely be to use their range to thrwart any of the dipsy-doo Versteegian bullshit Panarin tries on the left side.

Shatt provides most of the primary drive from the back end for the Blues, and he’s been rotating partners for most of the year. At press time, from today’s morning skate he will at least start out being partnered with Edmundson, who is a certifiable red-ass in typical Blues fashion, and another big boy at 6’4″, 210 lbs. Shattenkirk has tremendous skating ability and offensive instincts, but can be made to run around in his own zone if he has to play there for a prolonged period of time. But with the pairing above taking the more difficult assignments, Shatt gets the benefit of cush zone starts and drives the play as well as anyone in the league. His even strength scoring numbers are down a bit with only 10 points at 5v5 (5G, 5A), but he is an absolute weapon on the power play with 26 points, his third year in the last 4 eclipsing 25 points when up a man.

Young Colton Burpo started the season garnering Calder talk, but his scoring rate fell off a cliff after 4 goals in October, and only 5 the rest of the way. Still, over 30 points for a rookie defenseman isn’t to be totally scoffed at, and Parayko has the best possession share on the team at over 55% without the benefit of being zone sheltered. However he was slaying bums from the third pairing, but good teams need that kind of production from their depth. It’s been pointed out before, but Parayko is such a cowboy in the offensive zone his highlight reel should be scored by Ennio Morricone. He’s more than willing to jump into the play and even get below the goal line if need be. He’s also huge at 6’5″ 220 and can cover a lot of ground in a hurry. In Carl Gunnarson he has a stable partner to play free safety for him, as he’s bound to get put on an island sooner or later. Cretin Robert Bortuzzo and mirror-fogger Petteri Lindbohm are the spares.

At a certain point, Brian Elliott almost becomes a player that is to be universally rooted for, even if he plays for the Blues. ALMOST.

All he’s ever done is excel in the regular season behind a defense that doesn’t ask him to do much, and were he not hurt a healthy portion of the season and had Jay Gallon not been given full rein to win the job, he’d have put in enough time to warrant Vezina consideration. His .930 save percentage in 42 appearances (38 starts) was tops in the league this year, and his .936 at evens exceeds that. However, those numbers dip precipitously in the post season, with a career .897 in 19 appearances. Elliott looked locked in last week at the UC, granted against a depleted Hawks forward corps. And there’s the thought that he maybe, just maybe, will finally figure it out in the playoffs. But he’s still got a terminal case of being Brian Elliott.

Jay Gallon returned to practice today, and will presumably back up Elliott to start this series. In the event that he Brian Elliotts all over himself, Allen was solid in 47 appearances with a .920 save percentage, and .927 at evens. While about the same size as Elliott at 6’2″, 200ish lbs, Allen is a bit more athletic out of his butterfly, but tends to over-commit to angles on teams that move the puck well laterally. In 7 post-season appearances, Allen is only marginally better at .904, and the Blues will need more than that from whomever is in net this series. This time it will be different.