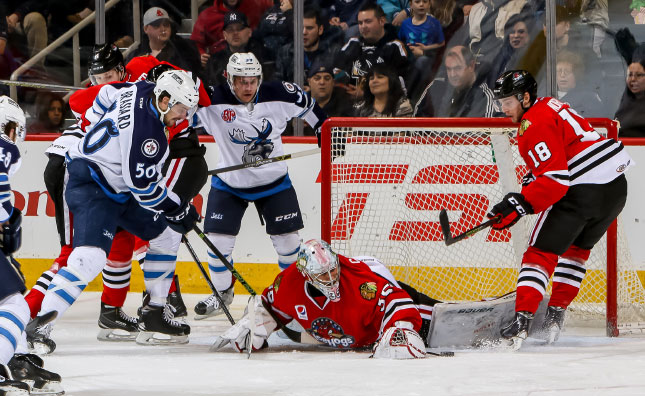 I am going to assume that the Hawks are not going to re-assign Michael Leighton to the IceHogs. If Leighton does find his way back to Rockford, he will start whatever postseason games the in which the Hogs participate.

In lieu of Leighton, Dent has a choice between Drew MacIntyre and Mac Carruth. On the surface, it seems like the veteran MacIntyre would be the obvious choice. After all, he was picked up at the trade deadline in part because of his playoff experience.

The trick is, however, that Carruth has been the better goalie. In fact, it hasn’t even been close.

That Rockford picked up a point Tuesday and won Wednesday in Charlotte is in large part to Carruth. On the other hand, MacIntyre has 76 games of AHL playoff experience. Carruth has 34 minutes of postseason experience at this level.

Dent has been using Carruth like his number one the last few weeks; he’s used the youngster in seven of Rockford’s last ten games. The way both goalies have performed, I would expect that trend to continue this week.

I’ll be honest, here; there is absolutely no way I would have told you that Carruth would even be on the Hogs roster at this point of the season, let alone starting a playoff game. The guy started the season on an AHL deal. He spent most of his entry contract with the Hawks in the ECHL and wasn’t re-upped last summer.

You know what, though? Carruth’s play has been solid, both in 25 games with the Fuel and in 14 games with the Hogs. He earned himself an NHL deal for the rest of this season back in February.

You can debate whether he has earned a contract from the Blackhawks this summer. For the time being, however, I think he’s earned his shot at being Rockford’s playoff goalie.

(Remember…if Leighton should be sent down to Rockford, all bets are off.)

The Rockford locker room is getting a bit crowded with several players coming aboard for the final weeks of the season.

Back on Sunday, Calle Dalhstrom was signed to an ATO by the IceHogs, joining fellow Swede Robin Norell to the Rockford defense. After he signed his entry-level contract with Chicago, 2013 fourth-round pick Tyler Motte was inked to an ATO and played this weekend in Manitoba.

The Michigan forward skated with Tanner Kero and Vinnie Hinostroza and had a goal and an assist Sunday afternoon. The three made an exiting line that could interesting to watch in the postseason.

Earlier Sunday, Rockford recalled F Daniel Ciampini and D Sam Jardine, bring the number of players on the Hogs roster to 30. Now that the college season is completed, it wouldn’t surprise me to see another couple of players signed to try-outs this week.

Recaps From The Road

(Note: No lines or special teams this week.)

Charlotte pounded away at Mac Carruth all evening as the Checkers out shot the Hogs 42-22. Rockford did manage to pick up a point in the contest but fell to the home team in Gus Macker Time.

A Brendan Woods tally was part of an 18-3 first period shot barrage that Carruth weathered admirably. The only reason Rockford was down just a single goal after 40 minutes was the play of the IceHogs goalie.

Rockford struggled to create scoring chances all evening but took advantage of a rebound left by John Muse to pot the equalizer 8:47 into the third period. The plays genesis was Mark McNeill stealing a puck just inside his own blue line and bringing into Checkers territory.

Cameron Schilling took a handoff from McNeill just inside the Charlotte blue line and tossed the puck on goal. The offering caromed off of Muse and onto the waiting stick of Vinnie Hinostroza at the right post. The rookie sent the biscuit into the basket to draw Rockford even and the score remained knotted through regulation.

The Checkers won the game four minutes into the extra session. Justin Shugg fired on Carruth from the left circle. The shot was stopped but lay free in the crease until Anthony Camara backhanded it home.

In a game very similar to the one the night before, Charlotte out shot the Hogs 39-19. The difference was that Carruth got two strong individual scoring efforts and made them stand as the Hogs locked up a spot in the postseason.

After a first period in which the teams played pretty evenly, Charlotte was controlling most of the action in the middle frame. The Hogs took a 1-0 lead late in the period when former IceHogs defenseman Zach Miskovic mishandled a pass at the point.

It was Vinnie Hinostroza who made the Checkers pay for the transgression. Hinostroza beat Miskovic to the loose puck and turned on the jets. Shelfing a backhand past John Muse, Hinostroza netted his 16th goal of the 2015-16 campaign at the 16:49 mark.

What turned out to be the game-winner came off the stick of Jake Dowell, who got the puck when Nick Mattson won control of it in the corner of the defensive zone. The Captain brought the pull coast to coast up the left side and slid his attempt under the pads of Muse 2:43 of the third period.

The Hogs were out shot 18-2 in the final 20 minutes of the game but Mac Carruth was up to the challenge. Charlotte got a power play goal from Anthony Camara midway through the third but Rockford held on for the victory.

Four minutes of third-period brain cramps spelled defeat for the IceHogs as Manitoba scored three times to cruise to a matinee win.

Heading into the third, it was anyone’s hockey game. Scott Kosmachuk scored in the eighth minute of the opening period, while Ville Pokka knocked home a rebound for a IceHogs power play goal 6:29 into the second.

Just 1:21 into the third, Manitoba took the lead on a poor defensive effort by Robin Norell. With the puck ringing around the end boards of the IceHogs zone, Austen Brassard coasted into the slot without so much of a glance from the Rockford defenseman.

Brenden Lemieux’s didn’t get all of the puck on his pass attempt from the corner. No matter. Norell simply watched as the pass inched toward the open man. By the time Norell began to move, Brassard had one-timed a shot into the upper corner of the net and given the Moose a 2-1 advantage.

From there, things turned real ugly real quick. Lemieux pounced on a rebound and knocked in his first tally of the season past Mac Carruth for a power play goal 2:25 into the period.

At 3:58, Sean Escobedo redirected a Brandon Denham shot through Carruth’s five-hole to make it 4-1 Manitoba. The IceHogs never recovered. Brassard added an empty-netter with 1:50 to play to complete the scoring.

The Hogs let two goal leads slip away twice during the contest, dropping the second half of the back-to-back with the Moose.

The game got off to a promising start for Tyler Motte, who was playing in just his second game with the IceHogs following his signing of an ATO this past week. Motte was near the left post when Vinnie Hinostroza skated behind the Manitoba net and centered the puck.

Motte took a one handed swing at the pass and redirected it toward the front of the net. The puck glanced off of Moose defenseman Jordan Hill and tumbled past starting goalie Connor Hellebuyck for a 1-0 Rockford lead just 56 seconds into the first period.

The Michigan man quickly helped the Hogs build a 2-0 lead on the power play. Motte’s pass to Cameron Schilling led to a goal at the 4:16 mark. However, Manitoba scored twice on goals by Brenden Kichton and Chase DeLeo to tie the game at two by the latter half of the opening frame.

Rockford struck twice in the final two minutes to re-establish a two-goal advantage. At 18:11, Ryan Haggerty sent a wrist shot to the top shelf from the top of the right circle. At 18:47, David Rundblad found twine on a one-timer and the IceHogs took a 4-2 lead into the locker room.

A Brendan Lemieux power play tally cut the lead to a single goal 6:26 into the second period. Manitoba used the man advantage to tie the game 52 seconds into the third period, courtesy of DeLeo.

The game-winner came off of the stick of Dan DeSalvo, who sent a shot over the blocker of Hogs goalie Drew MacIntyre with 2:49 to play. A chance to tie the contest was snuffed out when coach Ted Dent yapped a little too loudly at the officials. Rockford was given a bench minor for abuse of officials with 2:20 left. MacIntyre was brought to the bench to no avail.

Final Week Of The Regular Season

The IceHogs wrap up the regular season with a Wednesday night affair in Iowa before ending the season at home Friday against Grand Rapids and Saturday with Milwaukee. The game with the Admirals could well be a playoff preview, which I’ll have for you next week regardless of who Rockford is to face.

You can get my thoughts on the IceHogs throughout the week by following me on twitter @JonFromi.