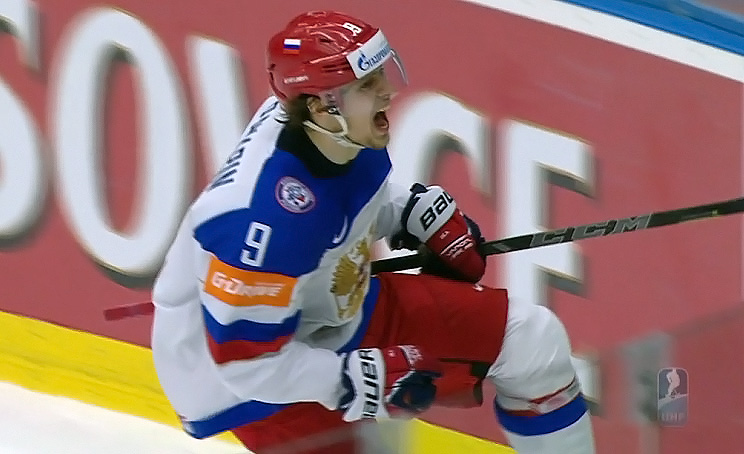 Moving onto the forwards, Artemi Panarin is the biggest wild card of the recent influx of Russians to the Hawks, who have not had a Russian forward in nearly 8 years after Sergei Samsonov (remember him?) was dealt to Carolina. Panarin will undoubtedly be labeled an highly skilled, an enigma, a malcontent, lazy, or all of the above because that’s just the way it works with Russians in the NHL. But with Patrick Sharp and Brandon Saad now gone, there’s a real opportunity for Panarin to make some noise on the left side.

For the KHL, that’s about as much as can be hoped for regarding a stat line for Panarin. There’s not much that can even be speculated about any kind of possession numbers. To put things in perspective, Alex Radulov led the league with 71 points. At the other end of the spectrum, Matt Ellison (yes, THAT Matt Ellison) was 8th in scoring with 57 points, five fewer than Panarin.

A couple encouraging things about Panarin with respect to gauging his numbers: he is still only 23 and will be 24 at the end of October, and his scoring output has steadily increased with age, particularly with St. Petersburg. In 106 regular season games with SKA St. Pete, he has 103 points. He was also good for 20 points in 20 games during the KHL playoffs where St. Pete won the Gagarin Cup, and had 10 points in 10 games at the World Championships where Russia took Silver. So at least at the international level, it’s clear that Panarin has quantifiable scorer’s instincts.

Regarding the type of player he is, he’s a right handed shot who plays on his off wing, and is listed at 5’11”, 192lbs, which for comparison’s sake is the same height and 12 pounds more than what Andrew Shaw is listed at. But obviously their games are quite different. Reports have him as a pass-first playmaking winger with a quick enough wrist shot from in tight to keep defenders honest.

The worry with European imports, particularly diminutive playmakers, is the lack of real estate in the North American game. The wall and large angry men arrive much quicker this side of the Atlantic, and it will be something Panarin will have to adjust to quickly to maintain a spot in the lineup. Additionally, he’ll need to learn to at least pretend to give a shit about his own end of the rink under Joel Quenneville. Panarin has an out in his contract to go back to Russia should he not break camp with the big club, bug given the paucity of real scoring threats on the left side now, he’d have to royally fuck things up to not get a look in the early going. If he can be properly sheltered and actually given power play time he might be able to outscore whatever defensive issues he has early on. The skill is certainly there.