Sit Back, Relax, and Strap it Down – ’17-’18 Blackhawks Player Previews: Richard Panik 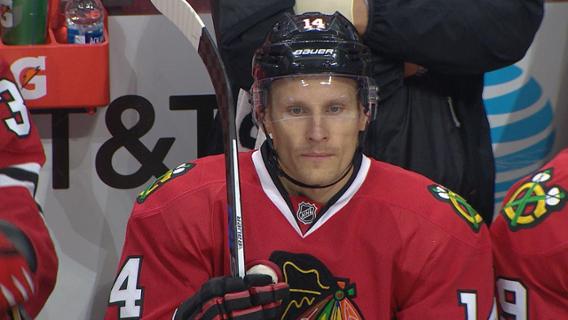 It’s often hilarious to remember that the Blackhawks got Richard Panik from the Maple Leafs for alleged professional hockey player Jeremy Morin. Poor Mr. Morin has found himself traded aproximately 200 times in his career and has never stuck at the NHL level. I don’t even know if he still plays for any organization in North America, and I truly don’t care to Google it and find out. Richard Panik is still here and could be important for the Blackhawks this season. He’s certainly important for those jokes about that one band.

A Look Back: Panik had a rather productive season last year, and in terms of what was expected from him he just about blew up. His 44 points were far and away a career high, and a cool 35 of those came at evens. He benefited greatly from playing with Toews and/or Hossa for most of the season, but in many ways also helped to redeem the season for those two as well. It’s not often that a forward of Panik’s ilk makes such a big leap forward in his age 25 season, especially after basically putrid production numbers in the past, but you’ll find no complaints around these parts about him being able to do so. His possession numbers weren’t exactly encouraging, but with a dead even split in zone starts, and the competition he faced alongside Toews, he wasn’t going to light up the Corsi Files anyway.

The most encouraging thing about Panik’s season is that it is extremely easy to find how and why he was able to jump up in production so easily. The cynic’s brain would likely seek to attribute it to an unsustainable spike in shooting percentage, as he registered a 14.2% conversion rate, but that was actually down last year from a 15.4% mark in 15-16, and was below his career mark of 14.4% as well. I was actually not that shocked upon seeing those numbers, because Panik does have a good wrist shot, with a quick release and damn near devastating speed on it.

Shooting was the reason for his uptick in production though, as Panik put 155 shots on goal last year. That’s 1.89 shots per game, well up from his 1.3 shots per game in 15-16 and career mark of 1.19 per game heading into last season. Shooting more often is pretty much going to increase just about anyone’s production, but when you’re a career 14% shooter, not shooting whenever you get the chance is damn near a crime.

A Look Ahead: My assumption is that Panik will stay with Toews on the top line this season but flip to the right side while Saad flanks the left. Given that Saad and Panik both play Hossa-type games, and Saad is better than Hossa was anyway (I am aware of the punishment for blasphemy, thank you), it wouldn’t be surprising to see those three gel together nicely atop the lineup. I don’t expect Hossa-like results from Panik, but he can at least embrace a bit more of a Hossa-esque role by getting into the corners and filling up the slot, allowing Saad and Toews to be themselves.

What I do want to see out Panik is even more shooting. Seriously, if you’re a 14% shooter, just find open ice and scream for the puck. I don’t want it to get to Sharp/Panarin levels of standing around and waiting for one timers, but Saad and Toews are both creative enough playmakers to get Panik in good situations to shoot frequently. If he can get two shots on goal per game, I wouldn’t be surprised if he put up 25 goals and 50 points this year. And assuming he spends more of the season on the top line and sees an increase in time on ice, he will probably have the chances to do just that.

Now, if he doesn’t end up producing very well, that wouldn’t make him invaluable to this team. He can still fit in nicely as a quasi-scorer on a two-way third line, possibly next to Anisimov. That wouldn’t be the worst outcome either. For $2.8mildo, if he can even put 15 goals on the board, it’ll be money well spent.

Tags: Blackhawks Brandon Saad If Richard Panik Is In Your Top Six Your Team Might Not Suck Jonathan Toews Marian Hossa Richard Panik