Sit Back, Relax, and Strap it Down – ’17-’18 Blackhawks Player Previews: Patrick Kane 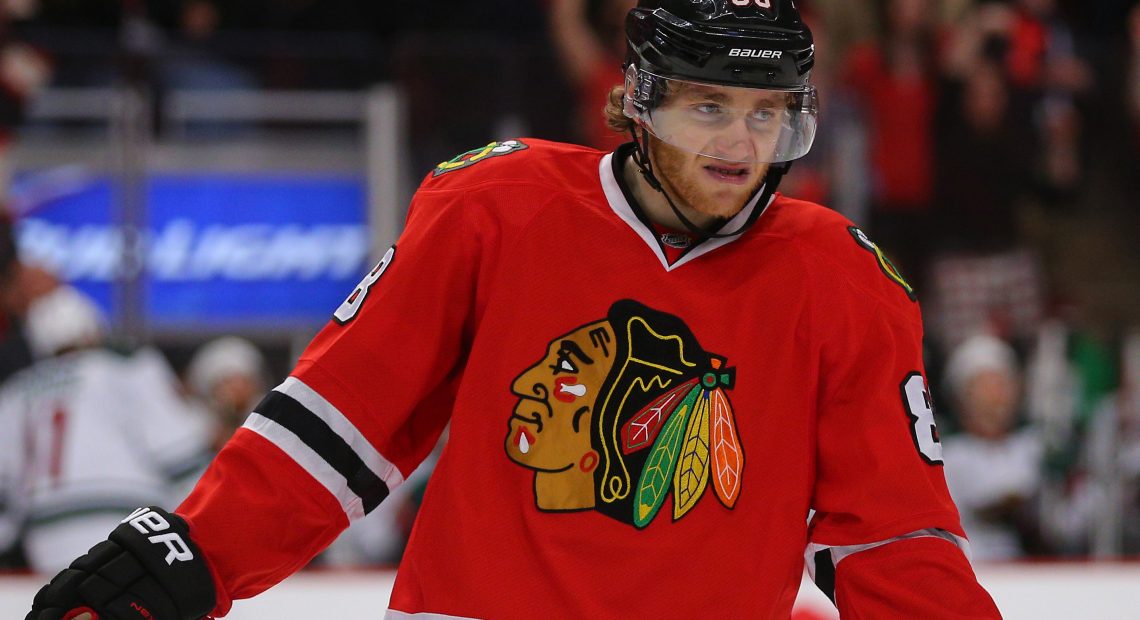 Thankfully we’ve made it another offseason without Patrick Kane drunkenly committing crimes. Unfortunately for Kane the Blackhawks traded away his running mate of the last two seasons, and he heads into this preseason without an obvious fit for linemates. Luckily, Kane is still good enough to succeed with just about anyone that Q could think to put him with, and is also capable of elevating the play of those players around him. I just hope he isn’t giving them offseason activity ideas.

A Look Back: Despite not putting up league leading numbers again, Kane turned in yet another impressive season on the scoresheet last year, playing in all 82 games and producing more than a point per appearance in the process. His 89 points tied him for second in the NHL with Sidney Crosby, and his 34 goals had him in a three-man tie for 10th in the league. He managed 27 of those goals and a total of 64 points at 5v5, which actually wasn’t down that much from his 29 goals and 69 total points (NICE) at evens in 2015-16. The consistency there is a big encouragement, and also shows just how power play heavy his 106 total points that won him the Art Ross and Hart Trophies in 2016 were.

Kane spent most of the season with Artemi Panarin again, who saw his feet slowly started to fuse with the top of the left faceoff circle last season as he turned into the one-timer version of a bobblehead. Seriously, Kane and Panarin probably could’ve had another 5-10 points each last year if DoughBoy hadn’t been possessed the ghost of Patrick Sharp (who, based upon his play this preseason, is assuredly dead). Panarin is gone now, but he’s not necessarily missed. You’ll be hard pressed to convince me that it was Panarin who helped channel Kane’s success and not vice versa.

A Look Ahead: Obviously Kane is going to need at least one new linemate, and possibly two depending on how scrambled Anisimov’s brain is  after his concussions last year. I will maintain that DeBrincat should be on Kane’s opposite wing until it happens or I die. He has the speed, vision, and creativity to slot well on a line with Kane, and they would feed into each other’s strengths just like Kane and Panarin did. Those two would be a dynamic offensive duo regardless of who their pivot is, though I’d love to see Schamltz there. As I said in my ADB preview, Schmaltz’s playmaking ability would mesh well with ADB’s scoring ability, and having a top-five NHL player to distract opponent’s would free up ice for those young guns. Kane would be a solid bet for another 60+ point season at evens, and those two would take a huge step in their development as well.

Otherwise, we might see Anisimov pivot Kane again while Patrick Sharp flanks the opposite wing. Anisimov is still a good fit as a center for Kane due to his size and ability to crash the net/shove his ass in goalies’ faces, so that part isn’t so bad. The problem is that Patrick Sharp is like 50 years old, can’t skate, and has a cardboard hip. And he’s not even the Blackhawks’ hottest player anymore. Putting him on the wing opposite Kane would be like tying a piano to the back of your Hellcat. Kane could probably still produce fine with Sharp on his wing, and he’d probably even get Sharp to score 15-20 goals if they were together long enough, but it’s not the best fit at all. Please, Joel, do not do this (he definitely will).

In terms of production, Kane has been a point per game player in all but three of his NHL seasons. I’d call it a safe bet he does it again this year. My official prediction is an 85+ point season, or at least an 85+ point pace should he get injured. Pray that doesn’t happen, though, because even with the young offensive talent the Hawks have, losing Kane would take a huge chunk out of their offensive firepower.