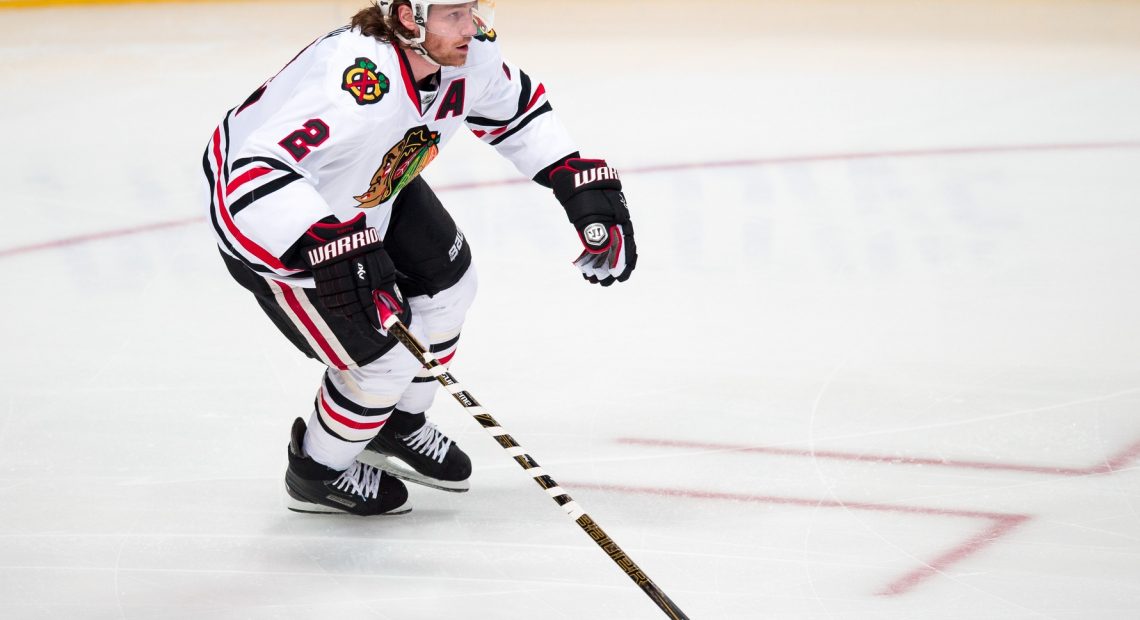 Bartolo Seabrook and Teflon Van Riemsdyk have taken the lion’s share of the blame for the Hawks seeing far more attempts against than they ever have in the Quenneville era. And it is wholly deserved. The two of them have somehow managed to get even worse when playing together at even strength since last there was a temperature check (rectally, obviously), playing to an astoundingly terrible 41.7 share together. That’s bad even by intentional-tank-Buffalo-Sabres standards, and indescribably awful for a middle pairing on a team with championship aspirations. In fact, if it even can be believed, this pairing should even be worse, because they’re operating at a 52% goals-for rate together, which is completely out of line with their possession numbers, and has often masked how terrible they have been. But there are silver linings to be found in that ghastly chart below and linked above.

First and foremost, a look up and down the column that shows teammates’ possession rates away from Seabrook shows a veritable ocean of 50+ rates among all of the important regular forwards. Even TVR has a 53.4 share when spotted as a third pairing option and not thrown out for 28 minutes a night. Van Riemsdyk catches a lot of shit here for not having any specific trait that would indicate growth, but at the very least he can not piss his pants when given highly favorable matchups and zone starts. So in some circles that could be defined as a skill, and it speaks to just how solid Michal Rozsival has been in his return from injury in his highly specified role. But there is also a silver lining to be found here with Porkins as well. He holds a 51.2 share in nearly 900 minutes away from TVR, compared to about 400 with. So there are options to be found.

Seabrook’s next most frequent defenseive partner is Erik Gustafsson, and those two are actually pretty effective with a 50.8 share together in 290 minutes, with Goose once again clearly benefiting from third pairing bum slaying time carrying a 58.0 share when away from Seabrook. The message here, as it has been since about November, is that the Hawks have one clear cut top pairing in Duncan Keith and Niklas Hjalmarsson, and two third pairings with six third pairing defensemen, as Big Country Bryant Svedberg clearly can’t even do what his scouting report says he’s able to, and Christian Ehrhoff cannot enter the Rhombus of Trust. Joel Quenneville has been making sandwiches with no bologna for four or five months now, and the results are laid bare for anyone with a functioning pair of eyes to endure. And while it’s the furthest thing from being by choice, there could very well be a long con afoot, should Quenneville choose to get creative.

It’s been a labored point for about four seasons since Keith’s frustrating 2010-2011 season where all he could find was shinpads and admitted disinterest until the playoffs, and while it might seem completely homer-ish with the skills of Erik Karlsson, PK Subban, and accused sexual assault perpetrator Drew Doughty dominating Norris talk, Duncan Keith still goes largely under-appreciated even among fans of his own team. With his name etched thrice in silver and two Norrises (Norrii?) to his name along with two Olympic golds and a Conn Smythe, Keith is the most decorated defenseman of this generation. For those who always looked to Scott Niedermayer longingly for a player like that on the Blackhawks, he’s here, and while he might not be as smooth of a skater or as natural offensively, he’s equally as decorated and really the only true comp as far as playing style. And Keith may end up being better in the long term, which is staggering to think about. Even this year, he is only two points short of his total last year (43 to 45), by only a goal and an assist, aided by only a slight spike in shooting percentage (6.9 this year to 5.8 last), which can nearly wholly be attributed to him getting rover privileges on the power play. That’s one more point than Norris Dark Horse in 10 fewer games, by the way. And he’s doing it all while basically facing the toughest competition of his career, and in seventeen fewer games than last year, which is key. Keith missing time earlier in the season could reap benefits this spring, with those unused miles off the tread of the tire now banked for when the games matter.

Last spring the Hawks showed that the “baby sitter” defensive template could work, with Hjalmarsson and Oduya absorbing the opposition’s top offensive threat and Keith and Sbarro babysitting any combination of Michal Rozsival before his foot went backwards, David Rundblad, TVR, and Zombie Kimmo Timonen. Keith averaged over 31 minutes a game over 23 games, though that was heavily skewed by a handful of multi-overtime affairs, the first of which he ended himself. A modified version of that will have to be trotted out this year if the Hawks have any prayer of surviving the meat grinder of the Western Conference.

So taking exhibits already in evidence, it’s clear that a) TVR and Seabrook cannot play together under any circumstance, and b) Keith and Hjalmarsson are the only pairing equipped to take on top competition. Given the lack of other options, Seabrook will have to remain the fixture on the middle pairing, and the best of a bunch of bad options is with Erik Gustafsson, with TVR on the third pairing and Rozsival and Ehrhoff platooning. But Joel Quenneville is loath to give meaningful minutes to inexperienced, unidirectional defensemen, and likely rightfully so in Gustafsson’s case. Goose has shown some tangible upside, but again, he will get exposed in a long enough series. So the next step is clear.

In the early stages of games, Pizza The Hut and Gustafsson will need to be spotted, and the hope is that Gustafsson doesn’t get the Hawks killed on the road where Quenneville cannot pick the matchup. This is key to the whole equation, ridiculous as it sounds to have a veteran team look to solidify its legacy and hanging its hat on a defenseman with less than half a season of experience with a coach who doesn’t play those kinds of players. But this is the hand they’ve dealt themselves.

The back half to that solution is when things get tight either trailing or protecting a lead is for Duncan Keith to be double shifted with Chunk. While the sample size is small (107 minutes, and nearly all of it trailing late), these two still have an undeniable 60.7 share together, and there is a long enough history to suggest they know how to play with one another and produce. It’s counting on another Hall of Fame performance from Duncan Keith, certainly, and he might not be able to reproduce it because the minutes with his primary pairing will be tougher. But if there is one player that has earned that level of trust and responsibility, it’s Keith. Having home ice advantage in any round would make doing this easier, but that ship has all but sailed.

The minutes Keith missed in November are going to need to pay off in April, May, and possibly beyond out of sheer necessity. And if the Hawks are to make history this spring, it’s fitting that it would once again be on the back of their most decorated player, and the one that has most dictated the outcomes of games and series over the last eight seasons.