High On The Hog: Limping To The Playoffs 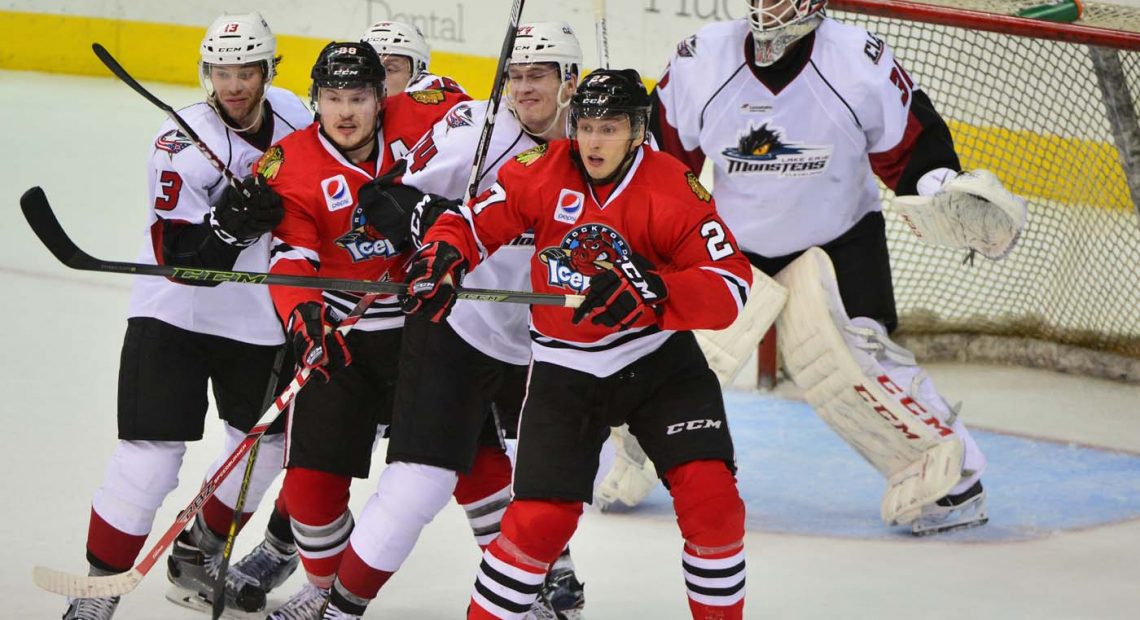 The Rockford IceHogs are limping into the AHL playoffs. There’s no kind way to say this. The Blackhawks AHL affiliate is putting the finishing touches on its second consecutive sub-.500 month of play, having dropped a pair of games in Lake Erie last week.

The Hogs have slid from the top of the Central Division and are battling to remain in front of the Monsters for fourth place in the division standings. The club also has the task of dealing with the negative PR that comes from the legal situation in which Garret Ross currently finds himself.

Taking the organization at its word, Rockford brass discovered this story the way the rest of us did; on the internet last weekend. It is, then, purely coincidental that the fortunes of the IceHogs have slipped dramatically in the past two months.

I’m not Dateline NBC, so go find your own copy of the police report and form your own opinion on the case. It’s easy enough to find. The date I will point to is February 4. That’s when Ross turned himself into the Sycamore Police Department and was charged with non-consensual dissemination of private sexual images.

Prior to his arrest, Ross was not enjoying the best of seasons. Through January, Ross had seven goals and nine assists with a plus-four rating. You could speculate that Ross was distracted earlier in the campaign. Once charges were filed, it’s readily apparent that his play took a hit.

Ross skated in 18 games after February 4. In those games, his offensive production totaled just four assists. He was also a minus-10 in that time. It is not a stretch to suggest that Ross wasn’t completely focused on hockey for the last couple of months.

In 2014-15, he was right behind Spencer Abbott and Mark McNeill on the stats sheet with 21 goals, 43 points and a plus-20 rating. You could point to his personal issues to explain a regression from his first two campaigns with the IceHogs. On the other hand, Ross was not skating with teammates like McNeill and Phillip Danault as he had the season before.

Even before learning of his alleged transgressions, it was debatable that Ross had earned himself an extension from the Hawks come summer. I’ll stop short of saying that Ross has played his last game with Rockford, but his prospects in the organization don’t look good.

(UPDATE, 3/29, 11:00 p.m.-With charges being dropped in Illinois Tuesday, the Blackhawks released a statement that they have reinstated Ross.)

The Pipeline Continues To Blow (In March)

The lead story on the Hogs website Sunday touted the continued success of the Blackhawks feeder franchise in Winnebago County. There are many players who have skated with Chicago this season. In terms of team success in Rockford, however, the outlook hasn’t been as rosy lately.

Heading into February, Rockford was near the top of the Western Conference standings with a 27-10-3-4 mark. The Hogs performance in the last two months has not been up to the early season standard set over the first three months of play.

The IceHogs record in February and March is 8-9-5; all against Central Division opponents. They’re 2-7-4 on the road and have dropped eight in a row as the visiting team.

There are ten games remaining on the schedule for Rockford. It would take an epic collapse for the Hogs to miss out on the playoffs. It’s a safe bet that the worst they can do is fourth in the Central Division. Even if they would slide below Charlotte into fifth place, it’s a good bet that their points percentage would be high enough to leapfrog the fourth-place team in the Pacific Division (currently San Jose).

The two likely first-round opponents for Rockford would be Milwaukee or Grand Rapids. Both those teams (as well as Lake Erie should it fall that way) are going to be handfuls for the IceHogs. It would be nice, however, to see the team get a second wind and hit the postseason with some sort of momentum.

Mashed By The Monsters

The game began rather dubiously for Rockford as the Monsters won possession of the opening faceoff and scored eight seconds into the contest. Josh Andersen sent a shot on net that glanced off of Lukas Sedlak and knucked past IceHogs tender Mac Carruth.

Not to be deterred from the early deficit, Rockford answered back with the first goal of the season for Jonathan Carlsson. The play was set up when Kyle Baun got the puck out to the defenseman at the top of the right circle. Carlsson deposited the biscuit into Lake Erie’s basket at 1:17 of the first period.

The score remained even until the midway point of the game, when the Monsters Markus Hannikainen took a pass in neutral ice. Ville Pokka and Mike Liambas were in front of the play, but Hannikainen knifed between the pair and beat Carruth stick side for a 2-1 Lake Erie advantage 12:43 into the second period.

Four minutes later, Sonny Milano led an odd-man rush up out of his defensive zone. Streaking into Hogs territory, Milano drove to the net and flipped a shot over the glove of Carruth to put the Monsters up 3-1 going into the second intermission.

Milano was on the finishing end of another Lake Erie rush in the 12th minute of the final frame to make it 4-1 Monsters. The IceHogs did manage a late Jake Dowell goal in the closing minute. However, Rockford’s fate had been decided long before the captain dented the net.

After an early goal, there just wasn’t much to get geeked about at Quicken Loans Arena if you happened to be a Hogs fan. The Monsters rolled and Rockford came apart at the seems as Lake Erie completed the weekend sweep.

David Rundblad got his first goal with the IceHogs 11:59 into the game. Lake Erie tied the score with a Steve Eminger 4-on-3 power play tally with less than three minutes to play in the opening period.

Three Monsters goals by Michael Chaput, Daniel Zaar and Lukas Sedlak in the second frame buried Rockford. Ted Dent, who had scrambled his lines in an attempt to wake up his club, removed Drew MacIntyre after 40 minutes and sent Mac Carruth out for the third period.

Sedlak scored his second of the night, a shorthanded effort that saw him fake Cameron Schilling nearly off of his skates before five-holing Carruth 9:27 into the period. From there, it was just a parade of Hogs to the box for fighting.

First to drop ’em was Mike Liambas and Schilling, who locked up with Dillon Heatherington and Brett Gallant, respectively, before the officials prevented a full-scale line brawl.

Pierre-Cedric Labrie engaged Josh Anderson minutes later. The bout featured some hair pulling on Anderson’s part. It also saw Labrie rip off Anderson’s helmet and swing it at him several times after the two players went down. Apparently, Labrie went to the door of the Monsters dressing room to jaw a bit more at his opposition.

(UPDATE, 3/29-The AHL suspended Labrie for one-game on Monday. He will miss Wednesday’s game at Chicago; Daniel Ciampini was recalled from Indianapolis.)

Also having words with the Lake Erie bench was Dent, who finally retreated to the Hogs locker room to prepare for the long drive home from Cleveland.

Rockford visits Chicago and the Wolves Wednesday night before hosting San Antonio and Iowa at the BMO Friday and Saturday.