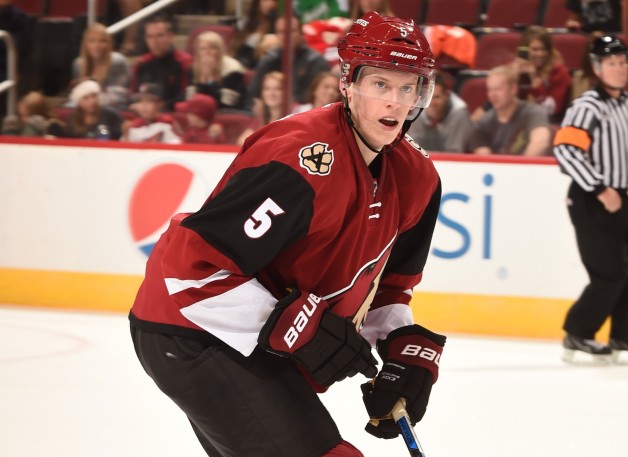 We’ve all gotten a few days here to catch our breath before the gates open on Saturday to free agency. Even if the Hawks don’t do anything (they will), and even though the market is pretty weak compared to other years, the action will fly thick and fast.

Still, it’s probably good to look back for a second and see what the Hawks got. Reached out to Sarah Hall over at FiveForHowling.com to get what they thought of the two former Coyotes headed our way:

For Coyotes fans, losing Connor Murphy is a little bittersweet. He entered the league at 21, a bit too young if you ask a lot of people. For a while, he had a hard time using his size correctly while hitting people or protecting the front of the net. In the past few seasons, he has started to round out his game, playing with Oliver Ekman-Larsson helped greatly. Murphy isn’t the type to score lots of goals or have a lot of assists. Last season he only scored two goals and had 15 assists for 17 points, tying his career high of last season. Murphy is still young, only 24, and his game shows it too. He is best deployed on the penalty kill, but sometimes that is even a stretch. He is inconsistent with handling the puck sometimes and that leads to turnovers and bad pinches. Murphy has room to grow, possibly turn into a top four defenseman, but his learning curve of coming into the league at 21 may hurt what growth he has now.

Laurent Dauphin is a young center who saw some NHL time last year. He played mainly bottom line minutes and was protected as much as he could be in certain situations. He was a good penalty killer when teamed up with the likes of Tobias Rieder and Jordan Martinook, which was also a line at one point. Dauphin could turn out to be like Marcus Kruger, a strong center who kills penalties and takes defensive zone draws when he gets ready for the NHL. Dauphin is also only 22 years old.

So take that for what you will.

-Last night there were some rumors popping up that the Hawks will take a run at Karl Alzner. This is a bit dispiriting on a couple levels.

One, Alzner just isn’t that effective. While he and John Carlson took most of the hardest shifts for the Capitals, and the hardest competition, their numbers were just not good. And Carlson’s leap up in a big way away from Alzner, especially when he was paired with Dmitry Orlov (Alzner was a 48.6 CF% away from Carlson, and Carlson a 54.4% the other way). It was the same story the year before, where Alzner nearly caused Matt Niskanen to drown and any shift away from Alzner was considered a life-preserver for Niskanen (Alzner was 46.9 CF% away from Niskanen, Niskanen 57.5 CF% away from Alzner). So if the Hawks and Stan Bowman really do look at these numbers as they claim they do, this means they simply don’t know how to read them and don’t know what their problems are.

It also suggests that the Hawks see their blue line needing another obelisk/free safety/defensive type, and I’m not sure that’s the case. We know the Hawks and Quenneville in particular like to have his pairs have one of each, a pusher with a safety net partner behind him. Unless it’s TVR and it’s all just trash. Anyway, the Hawks have two clear free safeties in Murphy and Seabrook. There are two clear puck-movers in Keith and Forsling. Kempny to me is something of an odd fit in that he is in between the two, defensively inclined but with good enough feet, hands, and vision to at least make a decent outlet pass. This is what Johnny Oduya was in his prime. He never racked up the points but his feet got the Hawks out of trouble and up the ice.

So conceivably you could pair Kempny with either, but I still see another puck-mover needed because I’d rather the Hawks have three of those for certain with Kempny a third and halfth (I know, not a word but you get it).Sadly there just isn’t a good option out there in the UFA category. Shattenkirk isn’t coming, everyone else sucks. The Hawks might be best off keeping their powder dry and seeing if anyone is available on a pillow contract at the end of July or what might be out there via trade.
Tags: Chicago Blackhawks Connor Murphy Karl Alzner Laurent Dauphin not encouraging