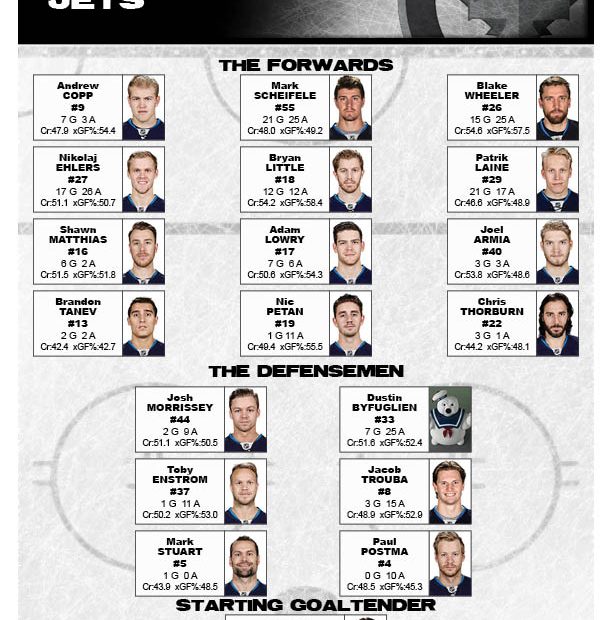 Still probably the most metal hockey blog name we’ve encountered. Anyway, Andy Boron is the editor and maven over there, and he was kind enough to take the time.

We’ll start with something simple: What the hell happened? Wasn’t there supposed to be a move forward after last year?

The short answer is: tons of injuries happened, and to the most important players. It started with Jack Eichel missing the first two months of the season with a high ankle sprain, but other key pieces such as Ryan O’Reilly, Evander Kane, Tyler Ennis, Dmitry Kulikov, and Zach Bogosian have missed significant time this year. The team lost their third-line center, Johan Larsson, for the season to an elbow and wrist injury just this week. The Sabres aren’t yet at the point where they have the roster depth to replace that much production lost, and there were times this season where they were forced to play as many as 6 or 7 injury call-ups from AHL Rochester, even dipping into emergency call-ups from juniors for a few games.

The more complicated answer is: We’re not sure if Dan Bylsma is the right coach for this team. Bylsma has been widely criticized for both his constant line shuffling and for the systems he uses. The line juggling this year has been forced upon him by injuries, so it’s hard to complain about that, but the Sabres play a very safe, boring style of hockey many nights that lots of fans blame on Bylsma. The Sabres, especially when riddled by injuries, are not talented or fast enough to hit a stretch pass or secure the puck on the dump-and-chase, which has led to a low offensive output and plenty of one-goal snoozers. Let’s put it this way – it’s hard to think of any move he’s made that has made you say, “Wow, great job by Bylsma there,” but there have been plenty of moves to criticize both this season and last.

Oh, and their penalty kill is maybe the worst I’ve ever seen, and that includes the tank years.

At least the goaltenders have been a bright spot?

To any outsider, yes, the Sabres have had two above-average goaltenders this year and rank near the top of the league in team save percentage, but you wouldn’t know it if you look at Buffalo Twitter during a game. Unfortunately, Sabres fans were spoiled by two decades of having Dominik Hasek and Ryan Miller between the pipes, and now anybody less than a Vezina candidate is terrible and needs to be fired into the sun. It didn’t help matters when GM Tim Murray paid a first-round price to acquire Robin Lehner, who, despite his decent-looking numbers, has a tendency to let in soft goals at bad times and has played poorly in both overtimes and shootouts.

Still, despite those flaws Lehner actually is a competent NHL goaltender with upside still to go, and Anders Nilsson has performed very well as a backup after a terrible campaign last year. The Sabres also have pretty good goalie depth in their pipeline with Linus Ullmark and Cal Petersen, so that position should be relatively stable in the foreseeable future, but Buffalonians survived 20 years on a diet of goalies stealing games and by gum we’re not gonna change now.

The big signing in the offseason was Kyle Okposo, and we’re sure there were dreams of him and Eichel wreaking havoc together for years to come. How has he been so far?

Okposo has been as good as advertised, leading the team this season in goals (11) and tied for the lead in points (25). He hasn’t played too much with Eichel yet thanks to injuries and forced line juggling, but when they are together their combination of speed and Eichel’s playmaking ability leads to plenty of opportunities for Okposo. In fact, thanks to injuries to Eichel and O’Reilly, it’s safe to say Okposo has been Buffalo’s best forward this season.

What do Sabres fans make of Rasmus Ristolainen? The tools all seem to be there, and he’s the leading scorer on the team. But the analytics crowd have never warmed up to him either.

Most Sabres fans love Ristolainen and think that the analytics backlash was thanks to a few outspoken Twitter accounts trying to “Well, actually…” the NHL over the summer. Last season Ristolainen started the year as a 20-year old kid who was thrown into a #1 defenseman role on one of the worst teams in the league and played a ton of minutes against tough competition, so of course there will be plenty of ways to nitpick his numbers. Risto still needs to improve in his own end to join the group of truly elite defensemen in the league, but he certainly has all the physical and mental attributes to do so.

This year, Ristolainen has shown improvement in almost every measurable area, especially in points, where he currently is tied with Okposo for the team lead with 25 in 37 games. He hasn’t reached his final form yet, but this season has been another step on the road from Ristolainen to Norristolainen, and at 22-years old and with a great work ethic to go with his physical gifts, there’s still plenty of room for him to continue to get better.

Even with how bad things have gone, is the turnaround still on course despite the record?

I think it is, it’s just not happening as quickly as most Sabres fans would like – and watching Toronto leapfrog past Buffalo isn’t helping any. Most of the Sabres youngsters are continuing to show good progress, and they still have a number of old, slow, or unproductive players on their bottom lines and pairings left over from the tank years that will be replaced over the coming year or two by much faster, more talented prospects like Alex Nylander and Rasmus Asplund, who are currently ranked #1 and #10 in scoring at the World Juniors. It’s frustrating for Buffalo sports fans who are sick of mediocrity to face another year in the draft lottery, but all the injuries are exposing a lack of depth, and barring some miracle turnaround, fans of the blue and gold will likely have to wait until next season for the true playoff push to start.