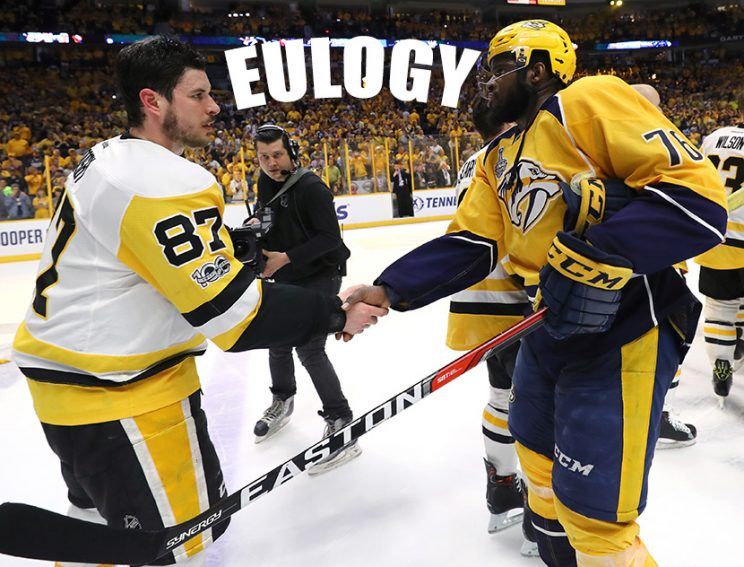 Once again, we were asked to give a eulogy for Yahoo!’s Puck Daddy Blog. We drew the last straw, and got the Predators. Here it is. Enjoy.

Ladies and gentlemen, we’ve come here once again to bur….you know what, it doesn’t feel right this time. Because… is this really a funeral? In most ways, it feels like the Nashville Predators were born this spring. As we all know, you’re not actually a hockey town, or even a section of civilization, until Canadian hockey media discovers that you’re a better place to watch a game than a freezing barn in Guelph, if that’s even a real place. Welcome to the big time, Nash-Vegas. You’re now officially on the sanctioned list for Globe and Mail writers to come and get drunk and fall down.

(Other areas on the list include Bob McKenzie’s lake house, Winnipeg and Tony Twist’s St. Louis-style hot dog stand. Congrats, everyone. You’ve made it.)

You got lucky in a sense, though. Because Canadian writers refuse to acknowledge that college hockey is an actual thing–heaven for fend any hockey player receive anything over 7th-grade schooling–they didn’t know your entire repertoire is lifted. All your chants and traditions, taken from boozed-up frat boys who couldn’t get tickets to their school’s basketball team. But that’s ok, good artists borrow, great artists steal, and whatever you are turn octopi into catfish.

Funny how that works, the way you moaned about Sidney Crosby trying to turn Subban’s head into fish-guts but mocked Wings fans doing the same about Shea Weber doing the same to Henrik Zetterberg. And now you are Wings fans, except your projectiles make for better eating..by the fans of the team that just beat you, apparently (I guess you should stick a photo of that Pens fan biting the catfish here, Greg – Sam). You’ve become what you once abhorred. Still, you helped highlight how an entire country that is essentially built on this sport couldn’t develop a fan culture beyond, “Go Leafs Go!” So thanks for that.

Ah, but you were born in so many other ways this spring. Look at you, muzzling the NHL’s most galvanizing personality for the last two games of the Final. Just like the big boys! We look forward to you spending the summer poisoning the water around PK Subban with rumors of his teammates not liking him and fights with Peter Laviolette, before the big Subban-Muzzin trade of 2018. Don’t you love being a REAL team now? Soon you can employ a policy of only hiring coaches and GMs that speak “honkey-tonk” or “talk pretty.”

You grow up so fast. It was just yesterday you were happy to get into the playoffs or celebrating winning a series. And now you’re here blaming the refs for everything from your loss to the Titans continued mediocrity to the atrocity Kings Of Leon have become.  Again, just like a traditional market. You are mere minutes away from Down Goes Brown making jokes about it every article he writes to mask his internal pain. You can almost see him doing a “Find/Change” from “Kerry Fraser” to “disallowed goal Game 6.” Isn’t being in the same house with Leafs fans now great? You should probably start tuning up your emotions for when Kevin Fiala wins a Cup somewhere else and brings it back to you after you chase him out of town because one writer saw him eat a pork shoulder once.

I suppose that’s the conclusion here. With everything you’ve been through, what we’ve discovered is your inferiority complex combined with a constant need to declare how special a fandom you are, conspiracy theories, your fear of personality with your players (and unveiled bigotry from your captain), terrible country music and barely middling rock bands to your underwhelming beer…you’re a Canadian city!

Since you are a Canadian city, let’s start by gushing over your nation’s proud son and Eugene from The Walking Dead look-alike, Ryan Johansen. Some have said this series would’ve turned out differently if Johansen was healthy. Others have said this playoffs was his coming out party and this is the superstar we all imagined he’d be. Actually, it was only Pierre McGuire saying all this but we digress.

Before his leg internally combusted, the 24 year-old Johansen had his way with a beefed up and stoned Jonathan Toews and then whatever the things were that St. Louis penciled in as their top center. Was it Patrik Berglund? Was it Paul Stastny? Who could really tell for sure because we were too busy dipping our retinas into cyanide.

Then in the Western Conference final, he was matched up against 94 year old Ryan Kesler. Bravo to Ryan Kesler, by the way, for continuing to employ the same “get inside the opponent’s head, GRITSANDPAPERFART” style in the playoffs that has yet to work in his entire career. And kudos to the Canadian media for forgetting how common of an occurrence it is for Kesler to get ragdolled by a superior opponent every spring. We are already looking forward to next summer when he’s once again portrayed as a shutdown center, and once again getting eliminated after 6 games the moment he lines up against a center worth a damn. “BUT LOOK AT ALL THOSE POST-WHISTLE SCRUMS!!!”

Where were we? Oh yes. We were talking about the massive raise Ryan Johansen shall be expecting now that he’s proven himself against the giants of the Western Conference. Nashville, we hate to be the ones to tell you this but if Johansen saw himself as a $4 million player before he even won a playoff series, what do you think he’s expecting now? Surely, a good old boy from Canada would never hold his franchise to the flames. No sir.

Lucky for you, now you get to resent two of your top players as Viktor Arvidsson is also due a new contract. This is where the fun really begins as you get to microanalyze how much each is overpaid and taking away an opportunity from a middling ECHL superstar. Didn’t we tell you being a NHL city is a hoot?!?

But you had some Canadian hockey city tactics down before your great “spring awakening.” You stood by Pekka Rinne for years and years, even though he was terrible in the playoffs for… well really quite a while. You told everyone we just didn’t understand, just like they do in Winnipeg. That the money he was being paid was quite worth it, we just couldn’t tell. We didn’t know what you knew, you claimed. And for three rounds, you probably felt vindicated, genuinely believing that Rinne had cracked the code at age 35 instead of “got hot for a few weeks there.”

But water always seeks its own level, you probably know that from your ice surface, and when you’re done building bomb-shelters to protect yourselves from the perceived threat of NHL refs, Gary Bettman, NBC, and Sidney Crosby, you’ll realize Rinne’s full-body dry heaves in Games 1, 2, and 5 cost you a parade. A parade that every “country” star needing some PR would have glommed onto to appear as “one of the people.” You’re basically the Kings fanbase after huffing paint for a week. And really, let’s not pretend Carrie Underwood doesn’t spend every minute of attendance at Preds games wondering if she’d have to be there at all if she’d just gone the Taylor Swift route when she had the chance.

At least you’ll always be able to look fondly back on this season as the time you won two games in the Stanley Cup final. Fans and media around the continent will be talking about this special run forever and ever. They’ll talk about how Sidney Crosby elevated himself to a top 5 all-time NHL player. They’ll talk about PK Subban being a distraction and too dancey and other thinly veiled casual racism. They’ll talk about how much Roman Josi actually sucks (which for some reason became a huge talking point amongst statheads during the playoffs).

We guess what we’re saying here is no one is going to talk about this run ever again outside of Nashville. The Predators were just another 2010 Flyers, 2014 Rangers or any one of the teams the Red Wings used to steamroll in the Cup Final season after season. An entertaining speed bump but a speed bump nevertheless. But hey, you beat the Hawks in the first round. The Canucks gave themselves a banner over it. At least we think they did. We stopped paying attention when they exited the NHL in 2013. Other teams to accomplish that are Arizona and St. Louis, who have gone on to dominate the league since. If by “dominate” we mean “definitely are a few dates on the schedule.” Welcome to your brethren.

One of our favorite jokes during the playoff run was Player X now has more goals the the Chicago Blackhawks scored (3) in the entire playoffs. We also like the one where the Blackhawks won as many games as Nashville has had parades since 2010. Unless next week’s Jug & Fiddle Parade is somehow related to winning something that actually matters. And no we don’t mean Faith Hill’s “Best Record By Woman Who Is Just A Photoshop Airbrush” award from the 2013 CMAs. To quote one of Nashville’s finest writers and one of the all time great Puck Daddy eulogies: how many Cups have you won Nashville?

The answer, we’re afraid is still zero. Also your uniforms look like piss.