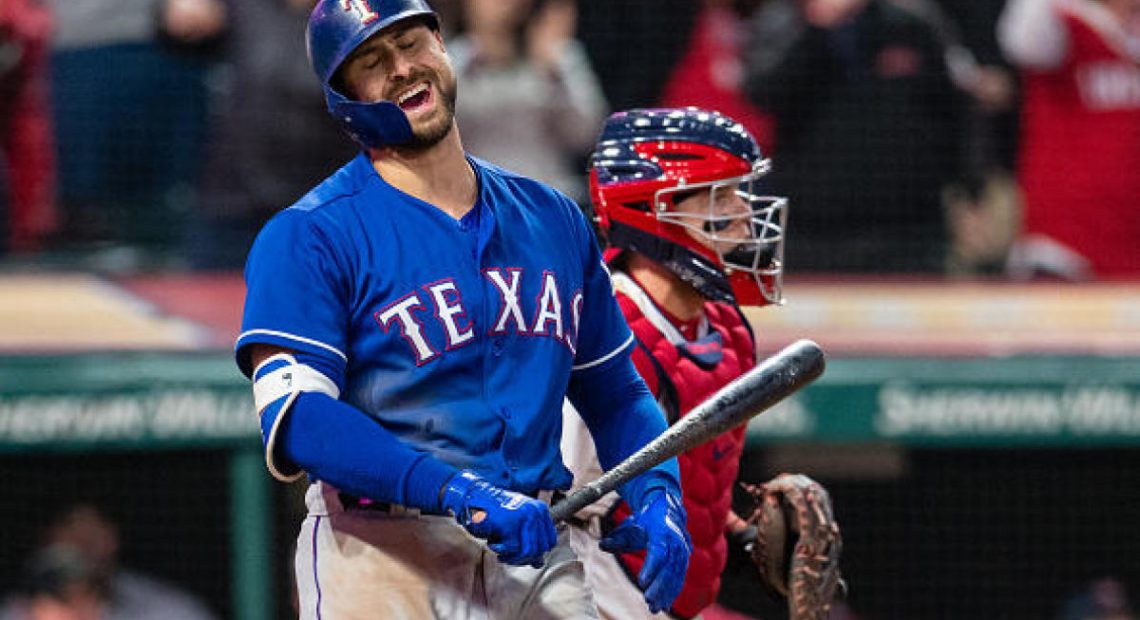 What to make of Joey Gallo? When the Rangers drafted him in the late stages of the first round in 2013, they were hoping they had found their power hitter of the future. The rock they could build their roster around for years to come. During his trek through the minors, Gallo looked to be exactly that, averaging well over a 120 wRC+ throughout multiple levels of their system. Parallel to that was his extraordinarily high K-rate. Through his 3 1/2 years in the Rangers minor league system, the lowest K-rate he ever posted was  29% in high A ball, and that was with less than 250 plate appearances. The highest was in AAA where he spiked to 39.5% with 228 plate appearances.

So the Rangers had found their power threat, and when they called him up full time in 2017 he proved just that, swatting 41 home runs in his rookie season to go along with 80 RBI. The thing that stands out about that is that more than 50% of Gallo’s runs batted in that season came from the long ball. That’s inordinately high, as the MLB average in 2017 was just under 40% for the top 20 leaders in home runs. He also carried over his penchant for striking out at a hilariously high rate, with his K-percentage sitting just under 37%. These trends showed up the following season in 2018, with his K-rate again in the upper 30’s, his home runs in the low 40s, and his RBI totals in the upper 80s.

Then this year happened. He started out the season on an absolute tear, hitting 16 home runs with 42 RBIs. His K-rate was still high, but his walk rate spiked as well, going up to almost 20%. Gallo was attempting to buck the narrative that he was a true “three outcomes hitter” by displaying doubles power to the opposite field all of a sudden. Gallo also showed some maturity in the field, matching his career high for assists in a season (8) within the first two and a half months. Had he continued at that pace, he would’ve easily passed his season records for singles, doubles, home runs and RBIs. Unfortunately, he also spent a considerable time on the IL this season, most recently fracturing the hamate bone in the palm of his hand. Based on most projections pertaining to healing times, he’s probably done for the season.

So who is Joey Gallo, really? Is he the dinger/strikeout/walk guy from 2016-2018? Or is the complete player that appeared this season? Looking at his advanced stats from this year, his BABIP sits at .368, which is fairly high but not to the point where you would think regression would cut his progress so far off at the knees. When you combine his BABIP from the previous two seasons it sits at .250, which is .118 lower then his BABIP this season. It’s also way below the league average, even for a power hitter such as him. If you split the difference between the two you get .309, and looking at Gallo’s numbers he put up before the hamate injury that seems to be just about right. His wRC+ for 2019 was at 144, with it being around 120 the previous two seasons.

Looking at the big picture for the Rangers it seems like Gallo has turned into exactly what they were hoping for: a gigantic lefty power hitter who the club can build around for seasons to come. The main question for them now is are they doing a good enough job with it? Danny Santana has busted out in a big way this year, but a peek at his advanced stats shows a lot of smoke and not much fire. Delino DeShields started slow but appears to be coming on now. Elvis Andrus is still awesome, but at 30 years old now is he going to be a part of this rebuild the Rangers now find themselves in? Nomar Mazara was supposed to be a thing, but he’s just a guy. Rougned Odor throws a mean right and is good for 25 home runs, but can he bat above the Mendoza line?

These are all questions the Rangers need answered if they’re gonna build around Joey Gallo. He’s definitely the kind of guy you can build a contender around, but I don’t know if they’ve done a good enough job so far to make use of him properly.