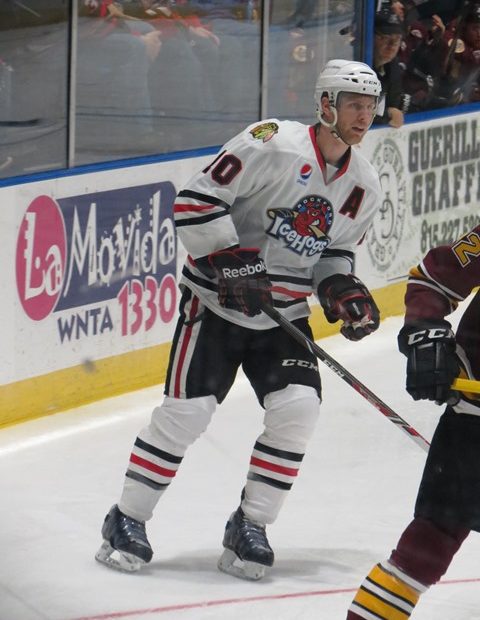 The IceHogs finished week 21 and started week 22 of the AHL schedule with three match-ups against Midwest Division rivals. In terms of the Western Conference standings, the IceHogs needed to take the majority, if not all, of the points at stake to continue to put themselves in a good spot to make the postseason.

The IceHogs hosted the Chicago Wolves on Friday, February 21 at the BMO Harris Bank Center. Jason LaBarbera and Jake Allen kept the game scoreless during the first period. The home squad was able to score twice in the second period to take a 2-0 lead courtesy of Brandon Pirri and Garret Ross. Ross’ tally held up as the game winner as LaBarbera’s shutout was broken by Chris Porter at the 7:06 mark of the third period. The final score was 2-1 Rockford.

-The IceHogs scored on one of their three power plays and killed off all three of the Wolves’ man advantages.

-The scratches for the IceHogs were:  Viktor Svedberg (injured), Wade Brookbank and Brad Mills (healthy).

The following night, the IceHogs were at home again as they took on the Milwaukee Admirals. The IceHogs essentially dominated on the scoreboard as they took a 4-0 lead going into the latter stages of the third period; the IceHogs goal scorers were:  Brad Winchester, Brandon Pirri (PPG), Jeremy Morin and Mark McNeill. Vinny Saponari broke Jason LaBarbera’s shutout at the 9:13 mark of the third to make the final score 4-1 Rockford.

-The Admirals outshot the IceHogs 37-26.

-The scratches and line-up were the same as Friday night for the IceHogs.

The IceHogs traveled to Iowa for a Tuesday evening match-up against the Wild. Rockford got on the board quickly in this contest as Joakim Nordstrom tallied 41 seconds into the contest. After Jonathon Blum briefly tied the game for Iowa, the IceHogs went on to score three unanswered goals to give the team a 4-1 win; the goal scorers were Jeremy Morin (x2, one on the power play) and Klas Dahlbeck.

-The IceHogs outshot the Wild 37-20; Jason LaBarbera was in net for the IceHogs

-Winger Jeremy Morin led the IceHogs in shots with eight.

–Wade Brookbank played in his first contest since January 25 on Tuesday evening because Theo Peckham was suspended for two games for an illegal check to the head after the Milwaukee game.

–The line-up was the same, except for Wade Brookbank replacing Theo Peckham and Brad Mills replacing Brad Winchester.

–Jeremy Morin’s hot streak continues as he now has a ten game point streak. In those ten games, he has nine goals and eight assists. He continues to play fantastic hockey for the IceHogs and has been one of their best players down the stretch.

–Klas Dahlbeck has also played great hockey for Rockford. In his last four games played, he has four points (1 G, 3 A). More importantly, he’s playing good defense for Rockford and has arguably been the IceHogs’ best defenseman all season long.

-It would be easy to single out more guys, but as the IceHogs ride their five game winning streak, the team has been playing well overall. Every guy is contributing whether it’s on the scoreboard or not. No one is struggling right now (*knocks on wood*) and all of the lines are clicking. The team needs to keep winning as the IceHogs continue to have the most games played in the Western Conference standings (57).