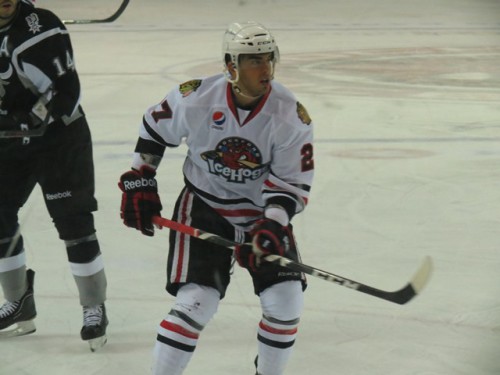 The puck finally dropped on the IceHogs’ 2013-14 season this weekend. The boys from RockVegas started off the season with a road trip down to Texas for tilts against the San Antonio Rampage and the Texas Stars.

On Friday night, the Hogs were in San Antonio for the first game of the year. In typical IceHogs fashion, there was drama right off the hop. Starting goaltender Antti Raanta left the game with a lower body injury just over five minutes into the contest after he took a shot off the inside of his knee. Kent Simpson came in to relieve the Finnish netminder and played spectacularly in net, stopping 49 shots, which is an IceHogs AHL era record for single saves in a game.

Unfortunately for Rockford, Simpson’s heroics weren’t enough to start the season on the right foot. The team ultimately dropped the contest 3-1; the Rampage were led by center Jon Matsumoto who tallied twice in the contest.

-Defenseman Jared Nightingale left the game during the 3rd period after taking a puck to the chin and didn’t return.

-The scratches for Rockford were:  Wade Brookbank, Theo Peckham and Maxim Shalunov.

On Saturday night, it was back to the building where the Hogs played their last game of the 2012-13 season and made a spectacular comeback after being down 3 goals in the first period to the Stars and kept their playoff hopes alive—until Milwaukee crushed them the following day.

Kent Simpson got the start in net for Rockford as Antti Raanta was sidelined with his lower body injury; Mac Carruth was recalled from Toledo to serve as Simpson’s back-up for this contest. Much like the last game in this building, the Stars got out to an early lead in the first period. It was 2-0 Texas just past halfway through the period. The Hogs battled back though and before the first frame was over they tied it up on tallies from winger Jeremy Morin and defenseman Adam Clendening.

Defenseman  Klas Dahlbeck gave Rockford its first lead of the season with a goal at the 10:12 mark of the second period, but Texas tied it up 1:10 later. Blackhawks first round (18th overall) pick in the 2011 NHL Entry Draft Mark McNeill put the Hogs in the lead for good with his first professional goal at 18:24 of the second period, giving the visitors the 4-3 lead. Backed by Simpson’s stellar play—he made 41 saves in this contest—the Hogs pulled out the victory for their first of the year.

-Defenseman Klas Dahlbeck and forward Mark McNeill led the team in shots with 3 each.

-Forward Alex Broadhurst was awarded a penalty shot during the second period, but he wasn’t able to convert.

-Before his goal, Mark McNeill recorded his first professional point with his secondary assist on Klas Dahlbeck’s goal.