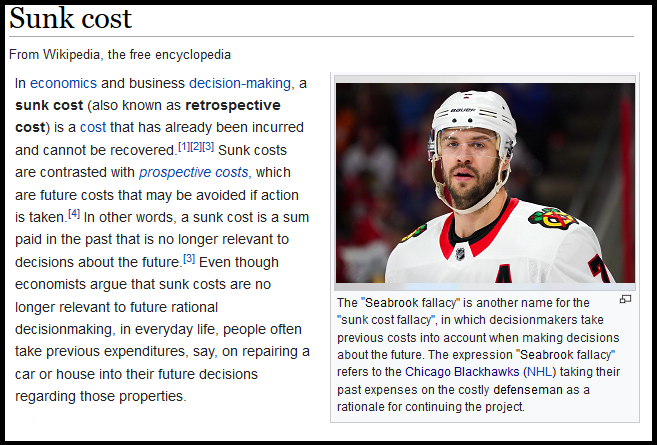 A Brief History: There are so many ways to measure what a negative effect Seabrook had when he was on the ice last year. Let’s start at the most obvious, which is his defense. 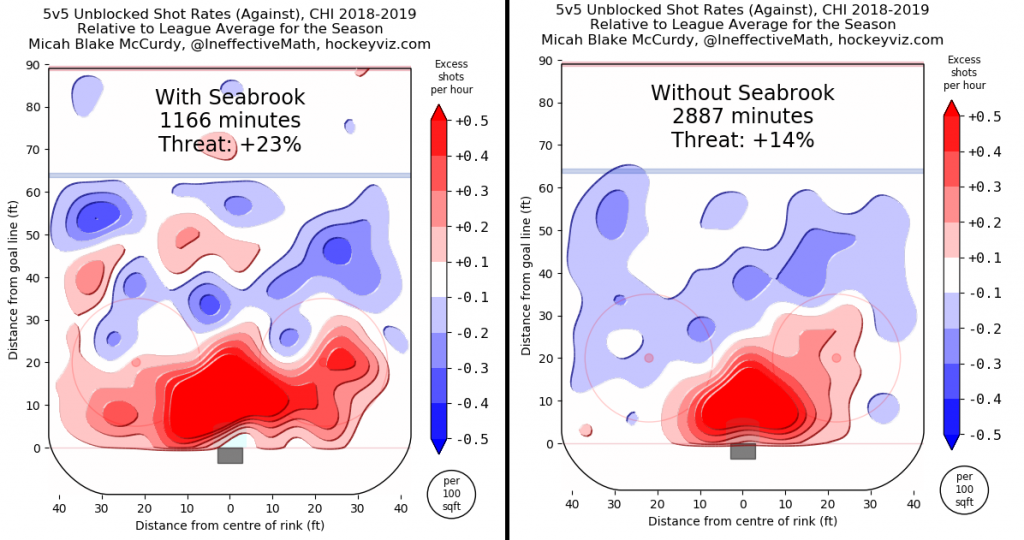 On the left is WITH Seabrook. On the right is WITHOUT. Both are bad. But it’s somehow and exceedingly worse when he’s out there. The analysis here is simple: Seabrook gets mauled when he’s forced to play in his own end.

The only Blackhawk D-man whose threat percentage while on the ice was higher than Seabrook’s (higher is worse on defense) was Gustav Forsling, and he won’t ever see the ice inside PNC Arena, barring a glut of Hurricanes injuries. Defensively, Seabrook is slightly better than Gustav Forsling. Ringing endorsement.

Worse than being bad by yourself is making your teammates worse. Seabrook excels at this aspect of the game. 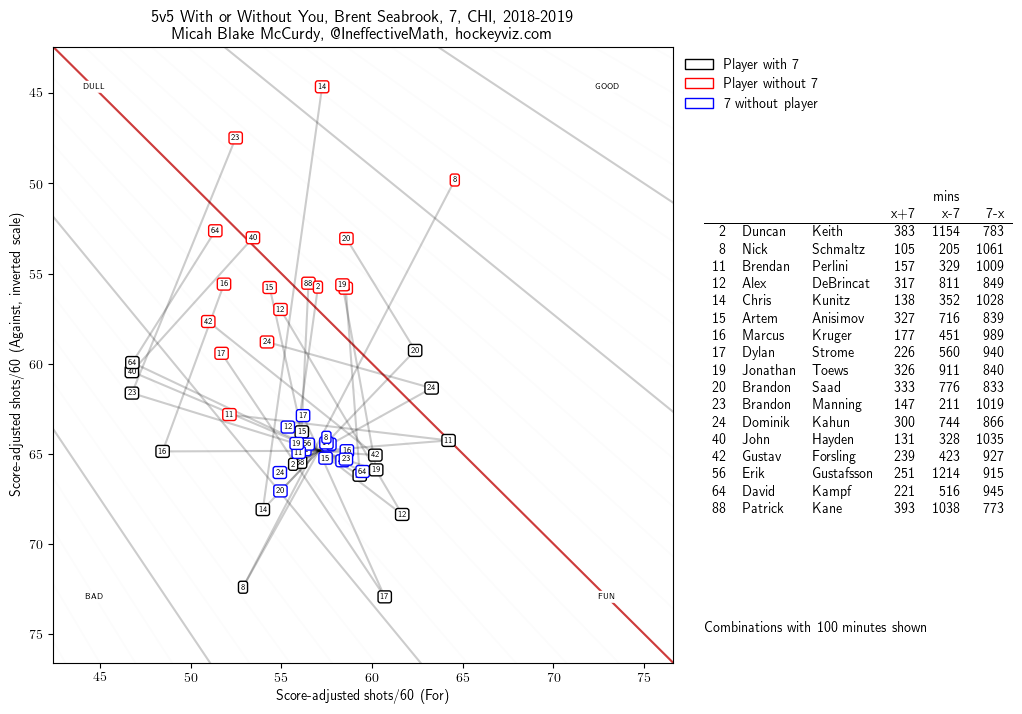 This chart shows score-adjusted shots per 60 minutes, both against (inverted y-axis) and for (x-axis). That red diagonal line is the 50% point for shots for and shots against (i.e., the breakeven point). The blob of blue in the middle is Seabrook on his own, which leans toward bad. The black squares are a given player WITH Seabrook. The red squares are the given player WITHOUT Seabrook.

Aside from reiterating how bad this team is at defense as a whole, this shows that when Seabrook is on the ice, opponents take more shots than give up. When you take Seabrook off the ice, literally every single Blackhawk ends up facing fewer shots.

In short, Seabrook is a black hole for defensive performance, and there’s nowhere to hide him. He sucks so much that he has his own fucking event horizon. That’s fucking something.

You bet your sweet crimson ass there is. Perhaps the worst part of Seabrook’s game is his penalty killing. 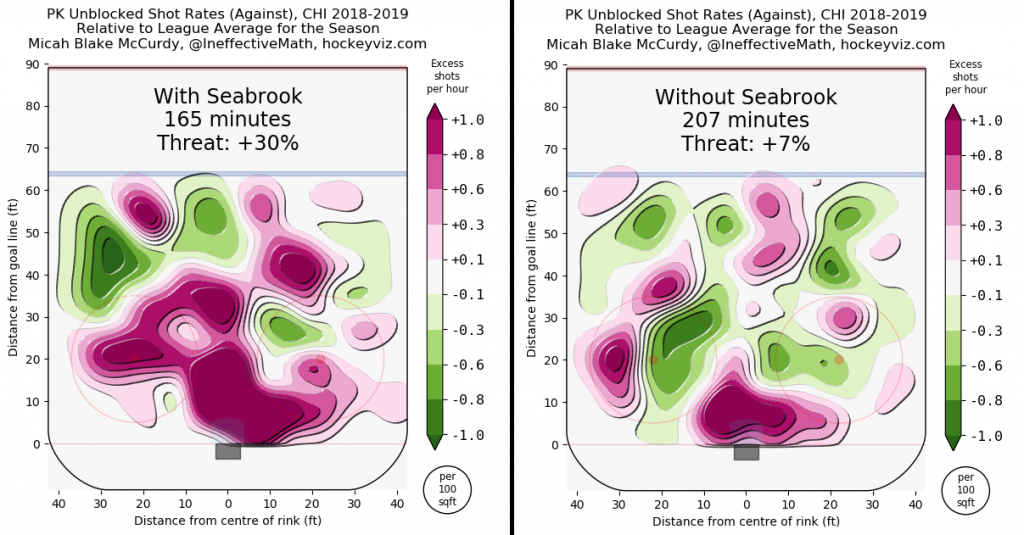 Jesus Christ, just look at how bad the PK is when Seabrook is on the ice (left). He played just 21 seconds fewer than the Hawks’s leading PK time getter, Duncan Keith, on by far the worst PK in the league. This is an utter dereliction of duty on Colliton’s part. There might not be a worse regular-time-getting penalty killer in the league than Brent Seabrook, and yet there he is, almost leading the team in playing time out there.

Maybe you’re sitting there buying the myth that he’s still useful on offense. But guess what? 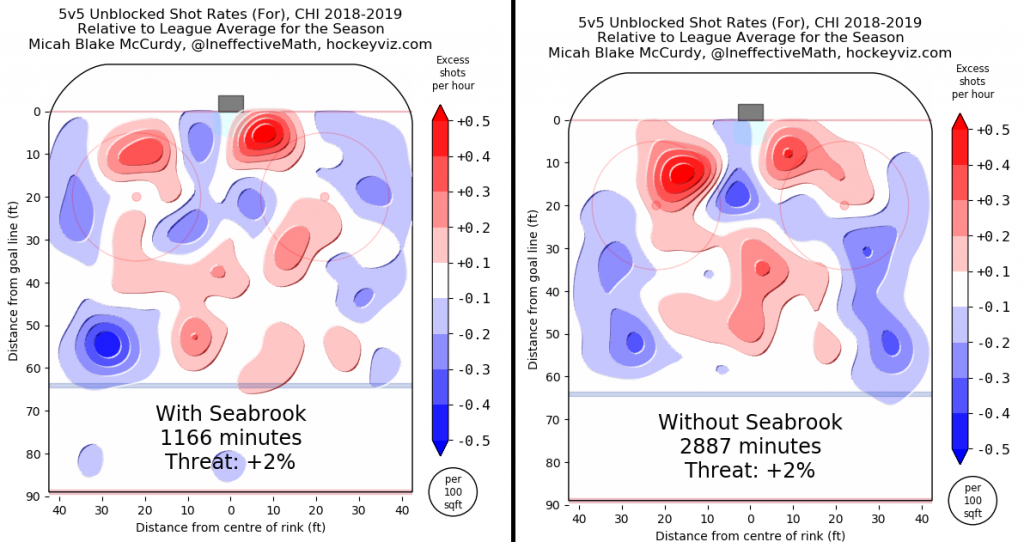 That’s not really true. In terms of shots at 5v5, Seabrook is entirely replaceable. The offensive threat (higher is better on offense) is the same whether he’s on the ice or not. Combine this with his GF%, and it’s even worse. Of Hawks who played at least 41 games, only Gustav Forsling (there’s that name again) had a worse GF% among Hawks D-men.

“Well, he’s still got a booming shot and can be useful on the power play,” you might say. 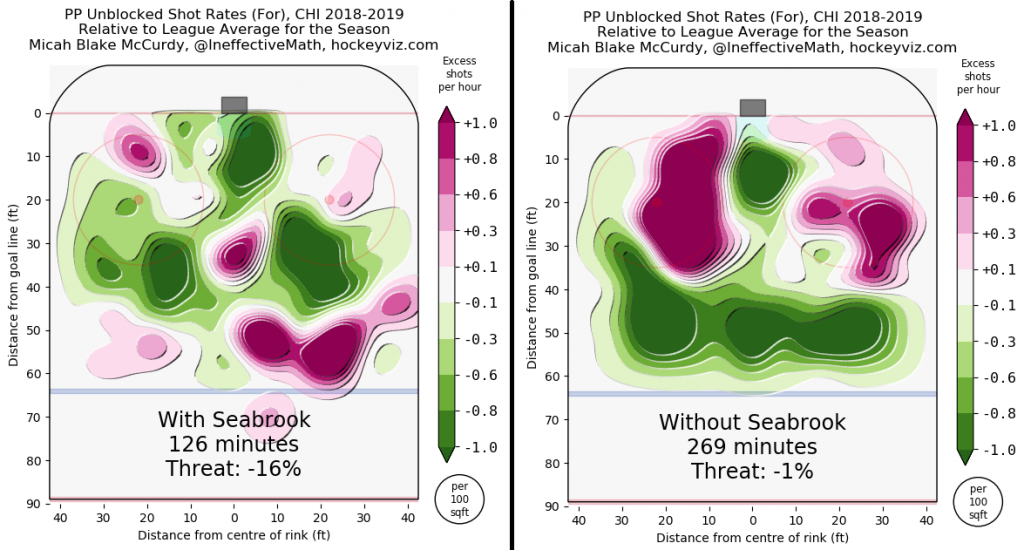 Pretty much any power play with Seabrook on it dies on this “still useful, booming” shot of his. This shot directly produced AT BEST 10 power play goals if you want to include the possibility of tips (two goals, three first assists, five second assists). That’s not nearly useful enough to make up for everything else he makes bad.

The only positive thing that happened with him last year is that he played under 20 minutes per game on average. That’s a start, but he really should be playing about 20 games per year.

It Was the Best of Times: Boqvist breaks camp and takes Seabrook’s spot. Seabrook plays 20 games all year as a 7th D-man, along with Dahlstrom.

It Was the BLURST of Times: Seabrook plays more than 20 games.

Prediction: Seabrook’s gonna get second-pairing minutes and look terrible doing it. Everyone’s gonna keep going back to the undefinable “leadership” he brings, saying, “You just can’t understand it unless you’re in the locker room.” Everyone will make excuse after excuse for his performance. It will be agony because none of this is really Seabrook’s fault.

This is just what he is now: a bad all-around hockey player. As much as I want to hem and haw about how a real leader would take himself off the ice, that’s not fair. It’s stupid, in fact. Instead, that’s a decision his coach—a man who likely has the same sort of respectability in Seabrook’s eyes as a soiled diaper—needs the stones to make. But Colliton probably doesn’t have the stones to do what anyone with even a cursory understanding of hockey would do: scratch Seabrook more often than not.

The only thing that Colliton, Bowman, and every other decision maker should be afraid of regarding Seabrook is how much damage he does to the Hawks as a direct result of playing ice hockey. It doesn’t matter how you slice it. Brent Seabrook is not a good hockey player anymore. He’s a sunk cost. You get nothing for continuing to ice him, except a below-replacement-level performance.

They’ll retire his number one day because he deserves it. We’ll revere him as a cornerstone of the Hawks revival, because he is, was, and always will be. The first time he comes back after his retirement, he will get the raucous standing ovation he’s owed. That’s what makes watching him be quite possibly the worst regularly playing defenseman in the NHL today as agonizing as it is.

We’re just as tired of this as you are. And it really doesn’t have to be this way.