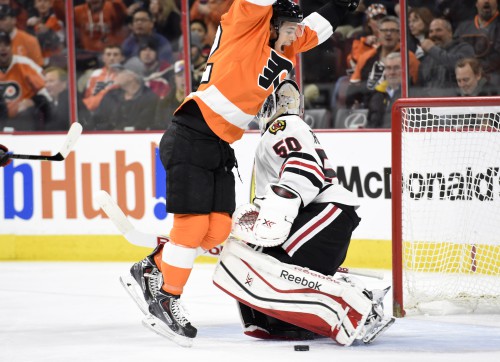 I guess we should just give up on the idea that the Hawks will ever win a regular season game in Philadelphia. They haven’t done so since the Clinton administration (I guess I’m legally obligated to indicate “THE FIRST Clinton administration now). We all would make the trade of that for the one win they got there in June ’10, but really could have used this one as it was one of the games in hand the Hawks had on everyone they’re competing with in the division (and that green and red blob in the rearview isn’t going away). But thanks to another first period where they couldn’t have looked less bothered and a couple nifty tips in the 2nd, it wasn’t to be.

Still, we’re far more concerned with the process than the results as the Hawks head into the playoffs, and the process is still very much an unfinished work. The Hawks cleaned up their puck management in the 2nd and 3rd, that doesn’t mean it was anywhere near perfect, but they were already behind at that point. Their scoring woes continue and they have trouble maintaining any sort of pressure for more than a sporadic shift or two. It’s worrisome, for sure.

It’s been a weird March. The Hawks have gone 7-2-1, which you’ll take, but they’ve only looked good doing that maybe four times (at home to the Canes, at the Rangers, at the Sharks, and at Arizona). So it’s just a question which will correct first, their record to match their performances or their performances up to their record? Honestly, I have no idea which it will be. Sorry.

Anyway, let’s clean this one up.

-Let’s get to something that is affecting the scoring, and that’s Antoine Vermette. He just hasn’t looked comfortable at all lately. I don’t know what the exact problems are, but I also know getting jerked around by his coach isn’t helping matters. Saad-Vermette-Teuvo looked like it was creating a fair amount of chances in Arizona and San Jose and a couple games after that. And then after Dallas Q blew it up. We’ve already seen the players somewhat rebel against this constant shuffling, and a player going through just about the most violent change in the style spectrum from Arizona to the Hawks would be helped by having time with the same teammates. But I don’t want to shift all the blame off of Vermette, who the Hawks need. They’ve lost Kane, and that production hasn’t begun to be made up by anyone really. Saddling him with Carcillo and Desjardins certainly won’t help matters.

-The lineup changes were just odd. Yes, Bickell was awful in Carolina and he’s always the easy scapegoat. But how come Versteeg, just as bas for longer, escaped the axe? And for a team that’s struggling to score, is removing one of your most creative players in Teuvo really the best idea? It’s certainly a weird optic when Teuvo looks good with Vermette and Sharp/Saad, gets one game with Toews, and then is in a suit for the next game.

-Michal Rozsival had some help in getting some popcorn to watch two goals go in against while he was out there. Crawford’s reverse to him was off, but it wasn’t so off that someone who can change directions slightly quicker than the Smithsonian could keep from turning into disaster, which the ensuing pressure became after Hossa got goofy with the puck in his own zone. He was admittedly out there forever for Giroux’s goal but Saad let Giroux go thinking Rozsival would pick him up and Saad could cover against a pass to a late-man. Rozie showed all the awareness of a smackhead as Giroux traipsed down the slot. ENOUGH.

-Kimmo skated 17 minutes tonight, which I think is a high since he arrived. Time to remove the training wheels, pair him with Rundblad, and get back to the top four we know is going to play together in the playoffs anyway and see if you can’t recover some of the drive they’ve lost.

-Still, I have to believe that if the Hawks keep getting performances like this from Richards and Oduya, who were both effective, they have every chance to make noise in April and May.

-This is the third game in four that Toews has lost more draws than he’s won, and he just looks labored. We’ll never hear it, but something is amiss.

-I’m probably making too much of this, but I thought it was curious that after the morning skate Toews said he expected to play with Teuvo tonight even though Shaw skated there some in the practice. You almost never hear a player talking about lineups and certainly not in contradiction to what the coach had just laid out. Again, we kind of already know the players are fatigued of Q’s blender, and this was just further evidence. It may speak to why some nights they look like they just couldn’t give a fuck. Or I’m losing my mind. We can never rule that out.

They’d better figure it out now. The schedule the last two weeks is brutal. There’s only a game against the Sabres who at that point might be shooting at their own net. Other than that it’s playoff teams until the last game of the season at the Avs, because they’ve been such a breeze for the Hawks. Even the Jackets have won eight of 10. If they don’t start to get the process correct, they could get buried these last nine games. And yet I don’t feel like that’s going to happen. Probably because Crawford will keep it from happening.