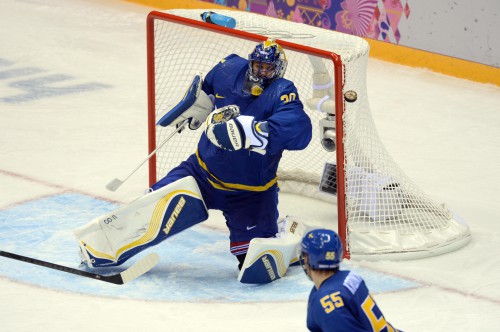 -Hjalmarsson and Oduya were what we’ve come to expect from them, solid. Hammer’s precision with getting the puck from the corners and behind the net to a waiting forward in his own slot to relieve pressure is going to have to be amped up this tournament, because that’s a longer pass now. No sign of problems today.

-I’m hoping this is a real boost to Marcus Kruger, though that won’t come after today. When you watch Kruger you feel like there’s a little more there. He could score more, he could create more, but has been so drilled by the Hawks that he just takes the smart and safe option. That’s all he’s being asked to do on the Swedish bottom six as well, but I hope two weeks playing with and against the world’s best pushes him to a new level with the Hawks. It’s happened before with others. Drew Doughty comes to mind, though that’s an extreme example.

-The Swiss are really fast, though maybe they won’t look as fast against teams other than Latvia. But there isn’t a lot of edge there either. Still, you can see with their speed and discipline and Jonas Hiller that they’re going to frustrate whoever they play.

-No, I still haven’t forgiven Sandis Ozolinch for Game 6 in ’96, and I never will.

-Go figure a Ted Nolan coached team skates its ass off and is hard to play against.

Day 2 – Everyone Else Into The Pool

Finland v. Austria (2am Central): Should be something of a breeze for the Finns, though these smaller teams are really going to pack the neutral zone, trap it up, and the Finns don’t have a Karlsson or Ekman-Larsson to bust it open as easily. Still, you can’t see them giving up more than one goal with Rask.

Russia v. Slovenia (6:30am): What does Ovie go for here? Like four? And then all the stories will be about how he’s finally embracing the pressure. You know how this goes.

USA v. Slovakia (6:30am): Tricky opening one for the Yanks, but you feel like they should get out of it. I don’t agree with starting Quick, who just hasn’t been all that good lately, but we could easily see Miller against Russia (isn’t that a nice way to start your tournament). Maybe Bylsma feels trying the untested Quick is safer, as if he spits it you can go to the proven and experienced Miller instead of the other way around. Slovakia just doesn’t have the firepower outside of Hossa you would think, though sometimes he’s enough. And I don’t trust Jaro Halak as far as I can throw him. Though I’m relatively sure Tomas Tatar will come up with yet another annoying goal. Hopefully Patrick Kane can get off to a good star this time around. We all remember the chatter after he didn’t score until the semifinal last time in Vancouver.

Canada v. Norway (11am): I suppose Norway could trap, trap, trap to try and keep the Canadians under wraps, but it ain’t happening. Batting practice.

Ok kids, I’m going in to Sin City for a few days. God knows I’ve earned it(?). Kills, McClure and Feather will take you through the weekend.