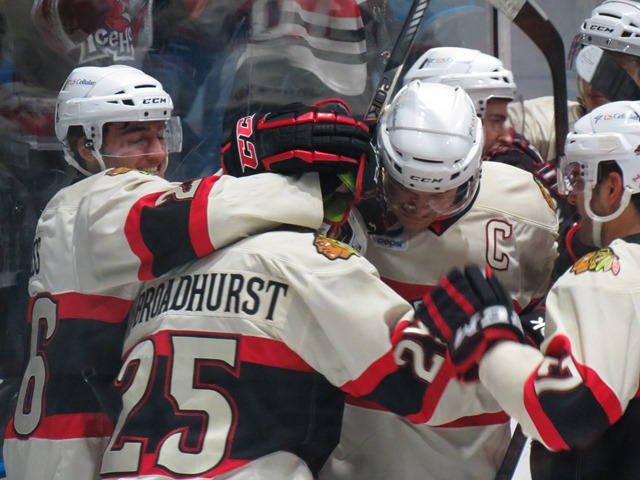 Saturday night’s game against the Iowa Wild was an offensive explosion for the IceHogs. Phillip Danault scored his first goal since November 9th (29 games)—also against Iowa. He also picked up a second tally—his fourth of the season—in the second period. Jeremy Morin recorded his first career professional hat trick with two even strength markers and a power play goal. Drew LeBlanc, Terry Broadhurst and Brad Winchester also registered single tallies in the contest to give Rockford an 8-3 victory over their new Midwest Division rivals.

Rockford had jumped out to a 3-0 lead by the time the early stages of the second period had rolled around. They then gave up two Iowa goals 44 seconds apart to make the score 3-2. Danault’s second tally restored their two goal lead, but Iowa fought back once more to bring the score within one.  After the third Iowa goal, the IceHogs then blew the game wide open and scored four unanswered goals.

-The IceHogs outshot the Wild 41-33; Kent Simpson was in net for Rockford and played well.

-Forwards Jeremy Morin and Phillip Danault led the IceHogs with six shots on goal each.

-Forward Pierre-Marc Bouchard (no. 96) made his IceHogs debut on Saturday. He picked up three assists and was a +1; his three helpers were recorded on each of Jeremy Morin’s three goals.

-Forwards Drew LeBlanc and Phillip Danault and defensemen Klas Dahlbeck and Zach Miskovic were all +3 on the evening.

The IceHogs hosted the Utica Comets the next day at the BMO Harris Bank Center. The game nearly ended in disaster for the home team. After getting out to a 2-0 lead, courtesy of Brandon Pirri and Alex Broadhurst, Utica brought the game to within one in the second period. Jeremy Morin restored the two goal lead for Rockford with a power play goal, but then Utica came storming back. Well, Nicklas Jensen stormed back. He tallied a natural hat trick to give Utica a 4-3 lead going into the second intermission.

With 3:41 remaining in regulation, Garret Ross converted on a power play to tie the game and send it into overtime. In the extra frame, Terry Broadhurst and Alex Broadhurst hooked up for the game winning goal. Terry fed Alex on a two-on-one break and Alex buried it for his eleventh goal of the season to give Rockford the 5-4 win.

-The IceHogs outshot the Comets 37-33; Jason LaBarbera was in net for Rockford.

-The IceHogs scored on two of their seven power plays and the Comets converted on one of their four man advantages.

-Forwards Brandon Pirri and Jeremy Morin led the IceHogs with five shots on goal each.

–Terry Broadhurst not only set up Alex Broadhurst’s game winning goal, but he also set up his younger brother’s first goal of the game that came in the second period.

-The lines and D pairs were all the same for the IceHogs except the last D pairing. Brett Skinner was paired with Jared Nightingale as Theo Peckham was a scratch.

–Jeremy Morin had a fantastic weekend as he picked up five points (4 G, 1 A) in two games. He was used on the penalty kill this weekend more often than he has been all season long and was manning the point on the power play (both 5-on-4 and 5-on-3).

-That monkey that you might have seen on the ice on Saturday night came off of the back of Phillip Danault. After he scored his first goal, he looked so relieved and was playing with more confidence than he has had in a while. He was solid on the penalty kill all weekend long and in essentially all situations. He really utilized his speed effectively in both games.

–Terry and Alex Broadhurst continue to play well together (shocker) with Mark McNeill on their line. Terry picked up three points (1 G, 2 A) this weekend and Alex recorded five points (2 G, 3 A). One factor that plays into their success is their speed. Terry’s a little quicker than Alex, but Alex is one of the few guys that can keep up with Terry on the ice so it plays into their hands well.

-The defense pairing of Klas Dahlbeck and Zach Miskovic also played well this weekend. On Saturday, Miskovic recorded two assists and Dahlbeck added a helper. Both were +3 on the night. On Sunday, they were even but they still were solid for the IceHogs in all zones.