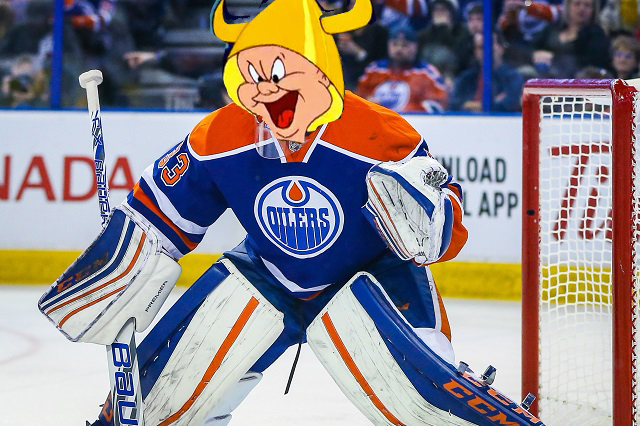 You could draw a lot of similarities between the search for a goalie and the search for a quarterback. One aspect that looks an awful lot alike is when a team splurges on what had been a backup to be their starter. You might see it here in town with the Lakeshore 11 and giving up the goods for Jimmy Garoppolo (god help us). In hockey, last year we saw Martin Jones, Cam Talbot, Thomas Greiss, Robin Lehner, and one or two others move from backup roles to starter roles, with varying success. This season Chad Johnson, Andrei Vasilevskiy, and one or two others have seized jobs. Heading into this offseason, Scott Darling could be given starter’s money and responsibilities, and one wonders if someone might not be coaxed to try with Antti Raanta after he walked the same gilded platform that Talbot did, following Henrik Lundqvist.

While Jones did get his team to a Final last year, there’s a serious argument that Talbot has been the biggest success of all of these.

The difference between Talbot and Jones is what they have in front of them, specifically defensively. Jones can count on M.E. Vlasic and Paul Martin and Justin Braun to clean a lot of things up and for Brent Burns to keep things at the other end. Talbot has… the confused gape of Kris Russell and precocious neophytes in Oscar Klefbom and Adam Larsson and the brief rips in the time/space continuum that allow Darnell Nurse to be healthy.

And yet Talbot has been able to maintain one of the better even-strength save-percentages in the league at .927. As Ryan Lambert looked at earlier in the week, Talbot might be the most unsung goalie in the league. No one goalie has seen as many “high danger” shots as Talbot has, and it’s not even close. He’s seen 289 according to Corsica, and the next one on the list is Frederik Andersen with 241 for the similarly blue-line challenged Leafs (strangely Martin Jones is 3rd, though some of that is just how much he’s played, though that’s also the case with Talbot). That has led Talbot to have the second highest GSAA in the league, behind only Braden Holtby. GSAA being something of a Goalie-WAR (Crawford is sixth, in case you were wondering, right behind Price).

The difference between Jones and Talbot this year is aims of their teams. The Sharks are essentially Cup-or-bust. So Jones’s workload is a concern after playing into June last year, as he’s only not started nine games all season. The only goalie who can beat that is Talbot, who has started all but three games for the Oilers. If he falls over in April, the Oilers probably won’t care much as making the playoffs was beyond their dreams before the season. While that might not satisfy their fans who see an incredibly weak division that could certainly be upset, it’s the front office’s job to keep their eyes on the future. Whether Peter Chiarelli can actually do that, I leave to you to figure out. From the #3 pick to the playoffs in one season is a pretty stiff turnaround.

Next year will be the time to strike for the Oilers. Only Draisaitl is up for a huge raise. Talbot might be the best bargain in the league at $4.1 million for two more years after this one. They’ll have cap space, though they’ll have to keep some powder dry for McJesus’s extension. So with that money they’ll have to find a capable backup that can keep Talbot fresh, because in the spring of ’18 we could see the Oilers be around a while. Who else in that division is trending up? Hell, who in the Central is either? It’s all there for them.