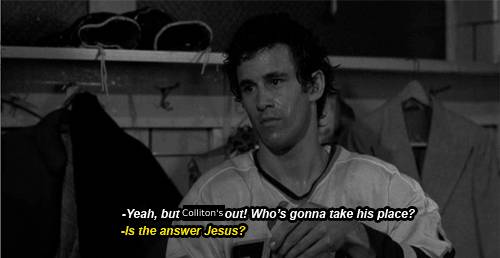 Since we last wrote, the Reckoning finally happened, and the Hawks won their first two games of the season. As we are all aware of now, Jeremy Colliton finally got ousted as Blackhawks head coach, and hopefully his galaxy-brained “Systems” are gone with him. After a 5-1 win against the paltry Senators, the Hawks went back to their usual play under Colliton this season, coughing up a two-goal lead to the Hurricanes and getting trounced by the Jets before the interim general manager decided after only a week on the job that it was time for a new coach.

Although many speculated it would be Marc Crawford who would get the interim job, it was instead given to Derek King, who had been head coach of the IceHogs and already has a strong relationship with a lot of the younger guys who came up through Rockford. Though he mentioned before last night’s game that he didn’t have time to be changing the Systems the team is currently playing with, I saw marked improvement on the defensive front last night and hope to see that continue. There’s nowhere else to go but up.

The Hawks finally get a win on the season, and all it took was for Patrick Kane to go off after returning from COVID protocol—no, the irony is not lost on us. He had a hat trick and an assist, being part of all but one of the goals scored by the Hawks. Brandon Hagel scored the other two goals, giving me a slight bit of hope that he’s learning how to finish. He also tends to be incredibly streaky with his points production going back to last year—if he can figure out how to score consistently, I think he’ll be productive in this league for years to come.

Seth Jones also had a pretty good game, stealing pucks away from opponents, making good plays, keeping pucks in the offensive zone, and getting another assist on the night. (He leads the team in assists and led in points until this game when Kane went off.)

Defensively, it’s still same-old, same-old. The Hawks got domed possession-wise in the first period, yet thankfully didn’t throw their hands in the air and give up midway through the game. Marc-Andre Fleury stopped 29 shots and put on a stellar performance despite this entire organization not being deserving of any save he makes. This came after he made 39 saves in the previous game and continues to get trotted out and asked to provide nearly all of the team’s defense via saves against the league’s best teams.

Finally, I’m not sure who’s big-brained idea it was to put Dylan Strome on a line with the likes of Reese Johnson and MacKenzie Entwistle, but I didn’t wonder for a second why he wasn’t producing this game. Surround him with likeminded players who can help him score if you actually want to capitalize on his offensive talents? Or don’t, I guess. It’s all a wash anyway.

I don’t think anyone genuinely believed the Hawks would win this one, but the way they completely collapsed to start the 3rd period after sending the Hurricanes into their first two-goal deficit of their season was a sight to behold. Perhaps it has something to do with people like Reese Johnson getting playing time ahead of Dylan Strome and Ryan Carpenter on the PP1 instead of Dylan Strome. But obviously what do I know?

This loss was no fault of the Cat, who scored two of the Hawks’ three goals and had a quality chance during the four-minute powerplay to end the game that didn’t end up going in. He and Kane are the only reliable scorers on this team, as everyone else seems desperately unable to finish. Kubalik seemed especially snakebitten tonight despite his fine performance against Ottawa. He had only two shots tonight and was on the ice for Carolina’s first goal in which he was unable to defend Tony DeAngelo of all people from tipping the puck to Derek Stepan, who knocked it in past Fleury.

Speaking of, this loss can also be partially blamed on Fleury, though that doesn’t keep me from pitying every second he has to stand on this ice behind this team. The 3-2 Hawks lead going into the 3rd period was blown by a bad goal on his part. He got five-holed by Jesper Fast, a goal Fleury absolutely has to have especially when your defenseman Jake McCabe becomes a turnstile before everyone’s eyes. The Canes’ fourth goal could be entirely blamed on Fleury, as he got a piece of the puck but was unable to keep it from dribbling behind him and into the goal. Tough loss, and yet there’s more to come before the weekend winds down.

The game that finally got Colliton canned was a pretty horrific one, with the Hawks essentially mailing it in after giving up a quick goal to the Jets just 47 seconds into the game. It featured Seth Jones getting caught in the neutral zone, leaving Paul Stastny completely alone in the slot. About two minutes later, the Jets converted on a powerplay opportunity thanks to Marc-Andre Fleury being screened by like three people, two of them Hawks. It doesn’t get much worse than this.

The underlying numbers were horrific; the Hawks had only 18 shots on goal the entire game and were crushed possession-wise in both the second and third periods. An offside powerplay goal for the Hawks early in the 2nd period continued to frustrate the entire team. The lone Hawks goal was thanks to Entwistle on yet another powerplay opportunity because expecting 5-on-5 goals with a Jeremy Colliton team is not a realistic expectation. I turned this one off early, if I’m going to be honest, and opted instead for my yearly re-watch of Slap Shot to fill my time.

For the first time this season, which already feels so long because of all the horrible things that have happened thus far, there was cause for excitement as the Hawks took the ice. Both Derek King and interim GM Kyle Davidson had said the right things earlier that day in their introductory press conference, and the fact that the Hawks were playing against the fodder that is the Nashville Predators made it seem like a win was entirely possible.

It almost seemed like night and day for this Hawks team, becoming reinvigorated with a new voice in the room and a fresh start. It was pretty even possession-wise for most of the game with both Kevin Lankinen and Juuse Saros making big stops to keep the game close through the end. This is progress.

Brandon Hagel scored the lone goal of regulation for the Hawks; he was able to deflect a Seth Jones shot from the blueline into the net. Unfortunately Hagel later left the game with a shoulder injury and did not participate in this afternoon’s practice either, because this team can never have nice things happen for too long. Entwistle also hurt his ankle this game after a spectacular collision with Mike Hardman in the neutral zone, meaning by the end of this one the Hawks were playing with only 10 forwards.

The Hawks allowed the Predators to tie things up a few minutes after that Hagel goal thanks to some wacky defense from both de Haan and Stillman. However, the D looked a bit better this game, perhaps thanks to King limiting Erik Gustafsson’s minutes as much as humanly possible down the stretch. For a 12-minute stretch, the Hawks allowed the Predators without a shot on goal, though that can also be chalked up to their offense being quite bad.

The winning OT goal was DeBrincat to Kane to DeBrincat just seconds into overtime—just another beautiful play to add to both players’ highlight reels. Ryan Johansen and Saros didn’t stand a chance.

The Hawks only have two games this week, seeing the Penguins tomorrow who are still without Crosby and the even more abysmal Arizona Coyotes on Friday. This gives King time to tinker with lines, systems, and whatever else before focusing on winning some theoretically winnable games. And with Hagel and Entwistle out we might see some other players get a chance in the lineup as well. We’ll see how things shake out tomorrow.

I leave you with footage of all three goals Lukas Reichel scored last night for the IceHogs; go check out Jon Fromi’s extended coverage of that game and the Hogs here.

Lukas Reichel gets a hat trick and @goicehogs have their first home victory 🎩🎩🎩#MBvsRFD pic.twitter.com/U8fnnxGq5C