High On The Hog: Lukas Reichel Getting The Hang Of It 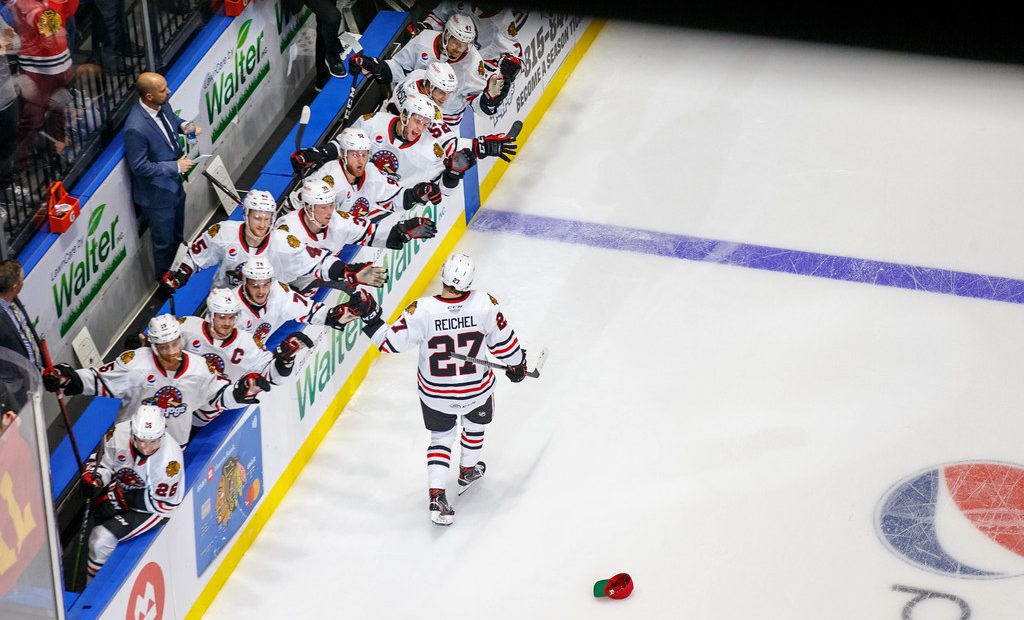 Lukas Reichel has had eight games with the Rockford IceHogs. The Chicago Blackhawks first-rounder from the 2020 NHL Draft is getting his first taste of North American hockey. It’s safe to say that he’s becoming comfortable with AHL competition.

Reichel now has a team-high eight points (6 G, 2 A) with the piglets, following a Sunday afternoon hat trick against Manitoba. The IceHogs beat the Moose 4-3 to split the weekend’s action at the BMO Harris Bank Center.

For the moment, the rookie forward is showcasing his play-making ability for the fans in Rockford. How long before he’s asked to make his debut with Chicago?

The Hogs were the aggressors early, but a pair of quick strikes by Grand Rapids put Rockford in a 2-0 hole midway through the first period. As an IceHogs power play wound down, Tyler Spezia and Dominic Shine came down the ice on an odd-man rush. Spezia got a one-timer past Rockford goalie Arvid Soderblom at 9:07 of the first period for the shorthanded goal. Just seconds after the subsequent faceoff, Taro Hirose redirected a pass from Jonatan Berggren to put the Griffins up two goals.

Grand Rapids controlled much of the action in the middle frame, out-shooting the IceHogs 14-5. However, it was Rockford that was able to close the gap on the scoreboard.

The goal came on a power play, set up by a Wyatt Newpower tripping infraction late in the second period. The IceHogs had just been denied entry into the Griffins zone when Ian Mitchell chased down the clearing pass. Rockford gave it another go, with Alexander Nylander threading a pass across the ice for Evan Barratt at the top of the left circle. His feed to Brett Connolly was spot on and the veteran forward guided the puck past Grand Rapids goalie Calvin Pickard 19:19 into the second.

Down 2-1, the IceHogs pinned their ears back and pushed hard for the equalizer in the third period. Pickard was up to the task, sending away all ten shots Rockford got to the net. Interim coach Anders Sorensen pulled Soderblom in the final minutes, but the Griffins came up with several key blocked shots to prevent the Hogs from tying the contest.

Hirose, with a goal and a big blocked shot in the final seconds, was named the game’s First Star. Second and Third Stars were Connolly and Spezia, respectively.

Lukas Reichel’s hat trick was the lead story Sunday, propelling the Hogs to the win in their first tilt with the Moose this season.

Despite being outplayed for the bulk of the first period, Rockford took a 2-0 lead into the intermission. The Hogs got a great individual effort from rookie Lukas Reichel to get on the scoreboard.

Reichel took a clearing pass out of the Rockford zone from Josiah Slavin and headed down the right side. He was separated from the puck in the corner, but regained possession after Brett Connolly knocked it behind the Manitoba net. Reichel calmly banked a shot off of Moose goalie Arvid Holm and into the net at the 11:08 mark for a 1-0 Hogs advantage.

Four minutes later, Holm left a rebound of Ryan Stanton’s shot in front of the crease. Rockford captain Garrett Mitchell pounced on the loose puck, skated to the right post and flipped it over Holm for a two-goal IceHogs lead at 15:10 of the first.

The action was back and forth in the second, with both teams getting some chances. The Moose killed off 53 seconds of 5-on-3 time early in the period; Hogs goalie Malcom Subban stopped a lot of shots at close quarters.

The IceHogs broke through late in the period when Slavin cleared the puck into neutral zone. Reichel won a race to the puck as it approached the Manitoba blueline, turned on the after boosters, and went high on Holm to unite rubber and twine. The goal came 19:02 of the second period and Rockford skated to the locker room up 3-0.

Manitoba broke up Subban’s shutout bid early in the final frame. Jeff Melott got position in front of the net and sent a feed from Cole Perfetti into the cage 3:28 into the third. Moments later, Reichel completed the hat trick with his prettiest goal of the night.

Nicolas Beaudin got things started, breaking up a Manitoba entry attempt at the Hogs blueline. Reichel retrieved the loose puck, stickhandled between the legs of Moose defenseman Declan Chisholm, and drove to the net. The backhand attempt was over the glove of Holm, giving Rockford a 4-1 cushion at 4:46 of the third period.

Despite winding down their third game in as many nights, there was no quit in the Moose. Manitoba countered with a Ville Heinola goal at the 6:04 mark to cut the lead to 4-2. They pulled Holm late and scored with 20 seconds remaining on Evan Polei’s first of the season. However, Beaudin snuffed out the comeback by clearing a rebound in front of Subban with seconds to play.

To the surprise of no one, Reichel nabbed First Star honors for his play on the evening. Slavin (two assists) and Mitchell rounded out the Three Stars. Subban posted 34 saves to pick up his first win of the season.