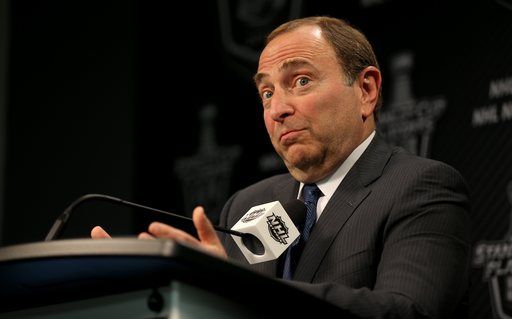 And because Lupul got fed up with being held out for no damn reason, the league is investigating that situation, along with that of Marian Hossa and the Blackhawks, and trying to see if it’s time to buck the trend. They apparently plan on having an independent doctor perform a medical exam on both players to see if they are indeed in playing shape. The weird thing for the Hossa side of it is that what’s preventing him from playing is a disease, not an injury, so the doctor essentially gets to determine how serious Hossa’s disease is for him, which is really fucked up.

In reality, it was probably only a matter of time until the NHL stopped letting teams ship their old/bad expensive players to the nowhere land that has become known as Robidas Island (thanks to, guess who: THE FUCKING LEAFS) just to get their contracts off the books. The problem is that the NHL has literally sponsored the practice for years by having puck stealing sonuvabitch Chris Pronger on the NHL Department of Player Safety staff while he was under contract with the Philadelphia Flyers and then Arizona Coyotes.

Granted, Pronger had been dealing with concussions and other injury issues for a few years before he LTIRetired from playing, but having a contracted NHL player on NHL staff is essentially burning the rulebook on the issue. Rethinking the issue now that teams getting more obvious about their salary cap fuckery and players are calling it out is not only hypocritical, but at this point they may have already set enough of a precedent that it could even be illegal. You can’t actively participate in the circumvention one year (Pronger was still under contract with the Coyotes last year) and then try to shut it down the next. And of course it’s all too convenient that should the NHL actually start checking on the status of LTIR claims the year after Pronger’s contract expires AND he leaves his role with the DPOS.

And look, I’m not afraid to admit this is sour grapes because it appears as though the Blackhawks could end up majorly fucked by the NHL’s decision on their Hossa situation. It’s not much of a reach to say that their playoff hopes could end up resting upon their ability to actually add a good player throughout the season, and their ability to do that almost certainly will rest upon being able to put Hossa on LTIR.

The decision on both Lupul and Hossa is expected by the beginning of the season, which would make sense because that’s when the Leafs and Hawks would have to make their LTIR claims on those players. So we just have to wait and see what happens, and hope the NHL doesn’t “NHL” their way through this decision. But also kind of hope they do “NHL” their way through this decision. This is so fucked.

Fuck the NHL, and most definitely fuck the Maple Leafs.