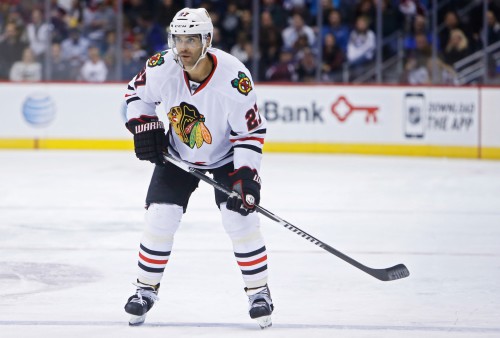 This has been a post that I’ve have bubbling underneath the surface for a bit (i.e. right under where the hair should go but doesn’t because my genes suck). After last night’s… whatever that was, the problems Oduya is having couldn’t really be in clearer relief. So let’s dive into the numbers, and some other things, and we’ll see just how far off O.D. is from the player that had the organization and fans so smitten.

The first thing you notice about Oduya’s “fancy numbers” is that his Corsi% has dropped kinda hardcore from last year and his brilliant 2013. Using the “score-adjusted” model, Oduya in 2013 had a 57.1%. It dropped to 54.6% last year, and is currently 49.4% this year. Now, that’s not entirely fair. In 2013, Oduya did not take the hardest assignments. He started doing so last year, which is why the difference in percentages comes up but it also freed Duncan Keith to win another Norris beating up on lesser lights.

But Corsi percentage isn’t something to judge Oduya on, at least not solely. Last season and this, his main job isn’t to generate offense from the back but basically keep the other team out as best he can. And the problem lies in just how many more chances teams are getting against him now.

Oduya’s shots-against per 60 minutes on the ice at even-strength has shot up  five shots from last year, 28.1 from 23.1. The amount of attempts per 60 minutes has gone up seven per game, from 45.7 to 52.7. And as you can see, a greater ratio of the attempts are getting through on net.

Another problem is that according to War On Ice, where I’m grabbing most of these numbers, is that scoring chances have also gone up about five per 60 minutes, from 22.6 to 27.0 per game. For those who need to know, they lay out how they define a scoring chance here, but basically from far out it has to be on the rush or an unblocked rebound, from the circles or so any unblocked shot, and anything from down low. Basically, when Oduya is on the ice there’s a lot better chances being fired at the Hawks’ net than there was last year.

Of course, defense is not just about shots, and Oduya’s goals-against per 60 hasn’t ballooned. It’s gone from 1.94 per 60 last year to 2.14 this year, which is maybe a more significant rise than it looks but not a complete rupture. However, some of that has been tempered by better goalie play behind him this year than last. Even-strength save-percentage with Oduya out there last year was .918. This year it’s .928.

Now you might think that it all just isn’t Oduya and some of this has to translate to his usual partner Niklas Hjalmarsson. Super Nintendo Hjalmers’s numbers are down, but not to Oduya’s scale.

How can this be? Well, the only thing I can guess is that when Hammer has spent the odd game playing with someone else, things have gone obscenely well. It just doesn’t seem like he’s spent enough time with anyone else for that to be true.

This season, Hjalmarsson has played 69 minutes total at even-strength with Duncan Keith. That’s about three-four games, and they came early in the season when Q was experimenting. Needless to say, Hammer and Keith kinda crushed the competition, to the tune of a 60% Corsi-percentage. They didn’t let in one goal together, and were on the ice for 3.2 per 60. Yeah, we’ll have some of that.

The only other d-man Hjalmarsson has played with is Trevor van Riemsdyk, and that was for barely two games. And those numbers are even better than they are with Keith, including a 71.2% Corsi-percentage.

But those sample sizes are a bit small to say for certain that it would always work that way, though based on the past few years I think we can safely say that a Keith-Hammer pairing would probably be pretty damn effective.

But that’s not going to happen, because of the uncertainty around Oduya. Unless you think playing with Seabrook could level out his game, and while Seabs has been better this year I’m not sure my digestive system is ready for that.

Obviously, the season is ridiculously long and Oduya could just be saving himself for when things really matter, veteran that he is. We won’t know until we get there. My fear is that the Hawks will trust Oduya simply because of what’s gone on before instead of what’s going on right now, otherwise known as the Michal Handzus/Michal Rozsival movie that has definitely gotten a thumbs down in these parts.

But there’s more than just numbers to Oduya. I see a player giving up his blue line way too easily, which to me shows a player lacking confidence. He definitely doesn’t want pucks getting behind him where he fears either a hit or a turnover (more likely the latter) so he’s being less aggressive and trying to keep everything in front of him. He’s rushing at times with the puck as well, which is the nightmare we saw against Phoenix in 2012. Benn’s goal on Sunday and MacKinnon’s last night were excellent examples of plays being set up by Oduya’s soft gap at the line and getting beat by someone cutting to the middle on him.

As I said last night, it feels like a lot is being pinned on a successful return from injury by TVR, but that’s a lot of eggs in an awfully fragile basket. I wouldn’t want TVR playing anything other than third pairing minutes come playoff time. If there’s a trade to be made that could pair TVR with Oduya on that third pairing, then I start to feel better. But there are really only two names out there who can do that in Sekera and Petry, and they’re going to cost more than Stan has shown willing to give up in trades before. It could get dicey.

-Reminder, we’ll be out and about for Friday’s game in Edmonton at A.J. Hudson’s – 3801 N. Ashland. I’ll have some of our new shirts on hand if you’d like one, and I may not even charge for them. See how I’m feeling that day. Yeah, it’s going to be cold. But it’s going to be cold from now until May, and we can’t let that get in the way of our drinking problems. And if you drink alone in your house too much, that’s when you have a real problem. Or something. Anyway, come out if you can.