No One Burned Down Your Cishek, Sheryl 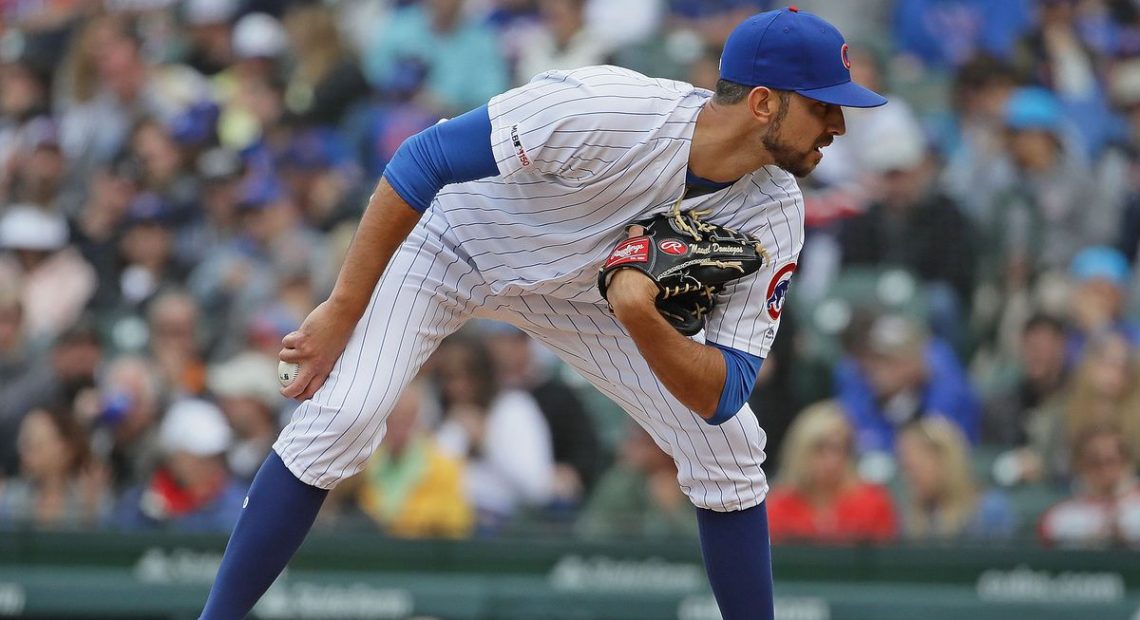 I have been beating the “Cishek Is Overused” Drum for over a year now. In fact, I’ve moved on from that, to now proclaiming that his ERA, which had been under 3.00 most of the season until last night, was actually a massive conspiracy the Cubs were foisting upon us to protect Joe Maddon or something. And everyone just went along with it. It seemed like every time Cishek came into a game, projectiles were hurling into the bleachers. And yet that ERA….it remained low. It wasn’t always others’ runs scoring either. Conspiracy, I tell you.

Just like last season, there is a huge fear that Maddon has used (and warmed-up) Cishek too much, and he’s gagging toward the finish line. But now thanks to the injuries to Strop, Kimbrel, possibly Kintzler now, and the horrid signing of Brandon Morrow, along with the implosion of Carl Edwards and the failure to develop anyone other than maybe Rowan Wick, Maddon has no choice really but to keep using Cishek. And even an IL stint later in the season, if even possible, doesn’t feel like it would be enough.

Last year, the numbers didn’t turn bad until September, when Cishek ran an ERA of 4.15 and watched his walks balloon to over six per nine innings. Based on last night’s turkey shoot, the collapse might be coming sooner this time around. And hey, Cishek is 33 and has piled up 133 appearances the past two seasons. This was after making only 49 appearances in 2017, so nearly doubling that to 80 last year was…well, it was a choice.

The thing with Cishek is the stuff and numbers don’t really suggest he’s flagging. His sinker/fastball has actually gained velocity every month. Same with his slider. He’s actually giving up less hard contact by five percentage points this year than last, and getting more soft contact by the same margin. IF you want to StatCast it, his average exit velocity is down from last year.

The problem, Captain Obvious, is that he’s giving up too many homers. But the contact numbers on his fly balls are exactly the same as they’ve been, if not better. He’s just watching twice as many homers leave the park on his fly balls than he did last year. Which can at least be partially attributed to the golf balls pitchers are being asked to throw this season.

The only change you can see as far as stuff this year is his slider doesn’t have as much sweep as it did. It’s the red line on top here: 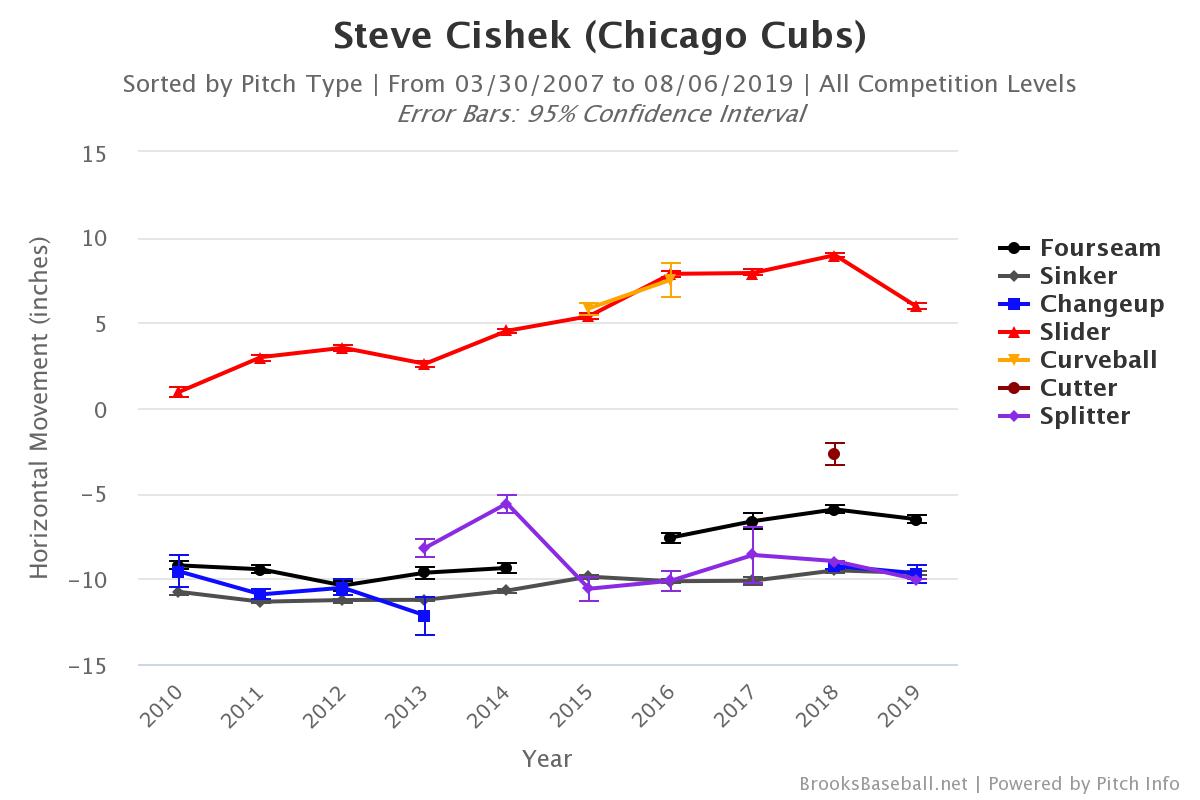 Still, hitters are hitting that slider for only a .211 average this year, though that’s some 30 points better than they’ve managed over Cishek’s career. It’s the sinker that hitters are mullering more often, but again, that hasn’t really lost any juice as far as velocity or movement. Maybe location is the problem? The added miles on the odometer have left him unable to pinpoint it as well? Not really: 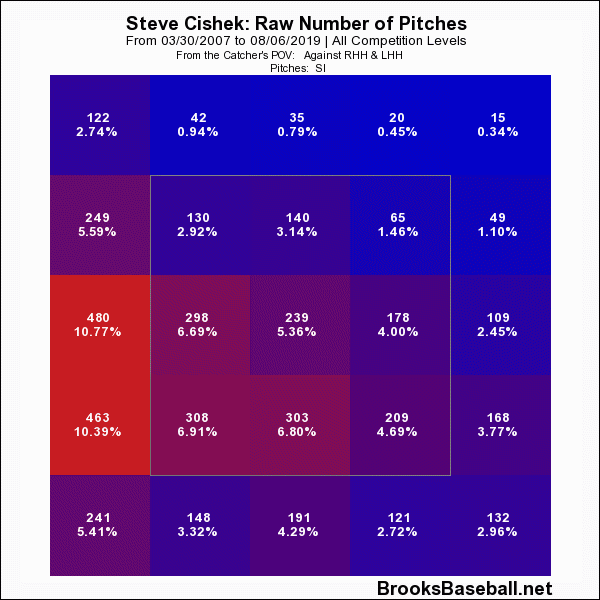 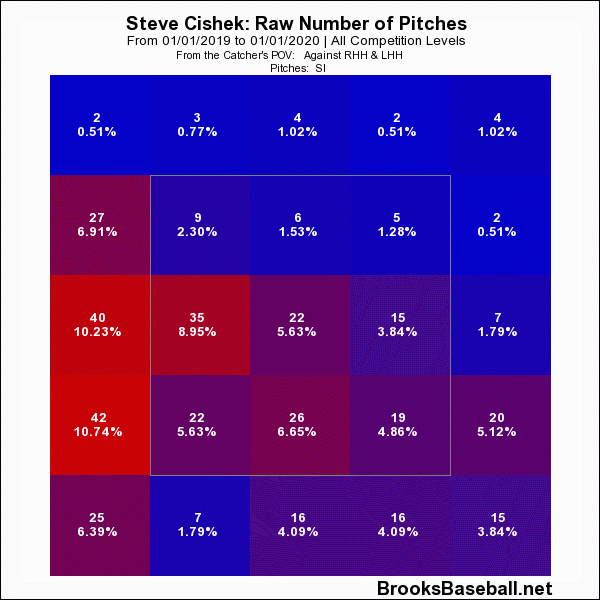 And as you would probably figure out, Cishek is only getting hurt when that sinker leaks over the middle of the plate, which it isn’t doing at any higher rate than it used to.

Still, I can throw all the numbers I want at you, and charts (oh how I love my charts), but we both watch the games and we see that almost every outing for Cishek has been a goat hump. He’s given up runs in three of his last five outings. And it’s not a question of rest in between, because he’s had rough outings with three or more days off in between and clean outings on back-to-back days. But at the end of the day, he’s only had two “clean” outings (no hits, no walks) in two of his last 11 appearances. And that slider is losing snap.

But given the situation, what choice is there?

Tags: Chicago Cubs Joe Maddon Steve Cishek this just might be the way it is