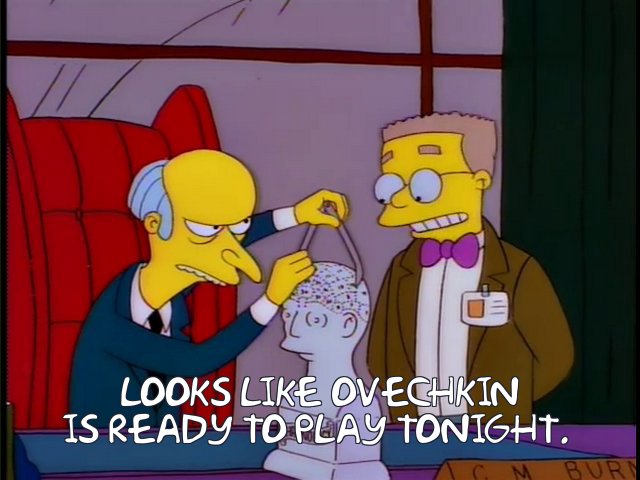 You don’t have to analyze last night’s Bolts-Caps game very hard. Andrei Vasilevskiy did to the Caps what Braden Hotlby has done on a few nights this spring, and the Caps–perhaps more predictably than we guessed just four nights ago–handed back their advantage so dominantly attained in Tampa. The Capitals didn’t do anything wrong, and watch in Game 5 how every time Dan Girardi is on the ice which side the Caps choose to try and enter on or dump the puck behind. You won’t be surprised.

So let’s bitch about coverage some more, because they make it so easy. In the 2nd intermission, while they were doing the highlights from the first 40 minutes, Keith Jones and Mike Milbury wanted to highlight Alex Ovechkin. And they wanted to remark upon how locked in they thought he was. And what evidence did they use?

The look on his face in warm-ups.

Actually, that deserves a little more accent: THE LOOK ON HIS FACE IN WARM-UPS.

After learning what Ovie eats before every home game, I’m not convinced the look on his face isn’t just a reaction to his lower intestine exploding, but let’s leave that discussion for another time. Jones and Milbury basically treated Ovechkin like a horse in the fucking paddock. “Ooooh, I like his gait! I’m laying a hundo on that one!”

Perhaps it’s isn’t totally fair to single out hockey doofus Statler and Waldorf for this kind of thing. How many years did we get announcers and analysts reacting to the look on Kobe Bryant’s face? Which Kobe most certainly didn’t rehearse for hours and days leading up to the playoffs to make sure people would notice and then know HOW MUCH IT MEANT TO HIM. I’ll give Ovie credit and say he doesn’t practice his PLAYOFF WARM-UP FACE, because that would be galactically stupid and Ovie is kind of weird-looking as it is anyway.

But this has to be one of the stupidest pieces of analysis from this crew, and yes I recognize the enormity of that statement. Jones and Milbury especially are responsible for the whole “Ovie is a playoff flop narrative” because it either garners attention, they’re too stupid to see what else what wrong for the Caps, or both. Just because Ovie has gotten a few more pucks to go in this spring doesn’t mean he was a sloth in previous springs. He’s just gotten more help this time around, namely Braden Holtby’s .925 SV% and Sergei Bobrovsky’s excellent impression of the Bernie Lean in net.

What does Ovie usually do in warm-ups? Have a smoke and generally look like he’s soaked in ennui? The dude always looks like my dog when I grab the leash, such is his excitement about just about everything. Oh but this time he’s locked in because NBCSN happened to get a good angle of him?

We could use warm-ups as a case-study if Alex…oh I don’t know, actually tried to eat the plexi-glass or kept viciously head-butting the crossbar. This was just an expression, and this is the kind of thing that speaks to color commentators who don’t know anything beyond “PASSIONGRITHEARTFAARRRRRRT.” If you asked either of these dinguses, and I actually have some patience for Keith Jones at times, what Ovie might be doing to open himself up more for better and more chances than he has in the past, they couldn’t tell you. This is the same team that uses one example of Ovie backchecking to indict his entire career, of course.

I shouldn’t be surprised. This is a spring where Pierre McGuire has rushed for the chance to show you Ryan Callahan highlights while Nikita Kucherov is busy nearly tearing the ears off any goalie that happens to have the misfortune of getting in his way on the power play. The Lightning scored one of the prettier collection of goals in a game last night, but let’s get more shots of Cedric Pacquette grappling with Local Oaf, because that has a huge bearing on the game. As mentioned above, why not point out that the Caps enter the offensive zone on Girardi’s side EVERY FUCKING TIME?! Oh, because that would go agains the “warrior” narrative about Girardi that Pierre has been pushing for five years at least even though Girardi is turning odd colors in the sun at this point.

I know, shouting at the rain again. We’ll never have hockey analysis that has moved beyond phrenology. Still, this one was particularly special.