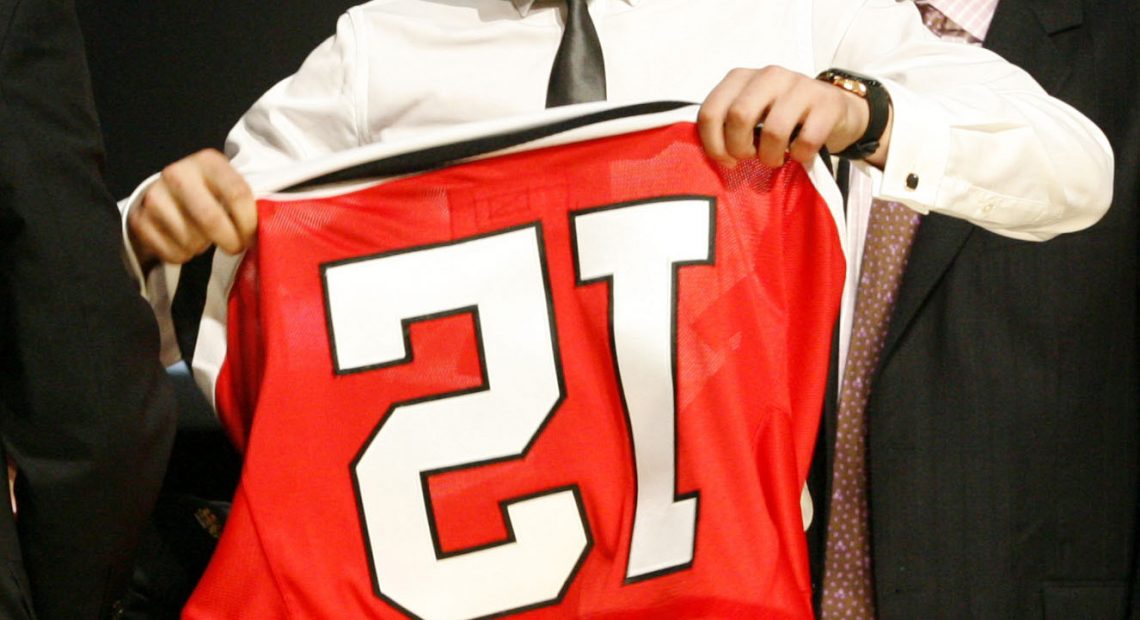 Back in 2011, Michael E. Schuckers published a study called “What’s An NHL Draft Pick Worth? A Value Pick Chart for the National Hockey League” that details a way in which to attach a numeric value or worth for each pick in the NHL Entry Draft. Mr. Schuckers used statistical models to assign the values. The paper details how the model essentially bases the values on the number of NHL games each draft pick can be forecasted to play during his career. The values assigned do not forecast the quality of the player of course so there are differences in what a team will actually get but the number of games is helpful in general terms.

The picks near the top of the draft have the highest values, while the picks near the bottom have the lowest. We all know that large numbers of drafted players never actually play a game in the NHL. So the decrease in value is logical and makes practical sense. The stated purpose of the paper was to help NHL decision makers figure out how to package picks for trades and other transactions.

I had undertaken a project to see which teams were better at finding value in lower round picks and how that affected the way the teams were built and the success they had achieved using those players. I used the values Mr. Schuckers developed in his paper to start sorting through the mass of data to do this.

For our purposes here, we will focus on players drafted in the 2005 NHL Entry Draft through the present. 2,128 draft picks have been made during this time. 689, or 32.3778%, of those selected have appeared in at least 1 NHL game. This will change as the season goes on and players are called up to their respective NHL teams, so we should expect some fluctuation in the exact figures.

Schuckers’ method attaches a value of 917 to the 1st overall pick. This doesn’t value the type of the player this person will turn out to be, but estimates how many games we can statistically expect this pick to play over his career.

In the table above, we see the first overall draft pick from 2005-2014 with base count stats through December 3rd. GP is the actual games played by each draft pick. POSS GP is the number of games played by that player’s team since he was drafted and so the games that the player technically could have played in the NHL. POSS GP% is the percentage of the possible games that the player actually played in. Value is the value assigned to the first overall pick in the draft, 917. Given the number of games played by the draft pick so far in his career, we can calculate how much of his assigned value he has met.

The two most recent picks have played 100% of the games they could possibly have played in during their new careers. Patrick Kane has played the highest percentage of POSS GP in his career, 95.6%. Kane has fulfilled his draft pick value (expected games played through his career) to the tune of 58.8%. Barring unforeseen circumstances keeping him from playing, Kane will have completely fulfilled his pick value at the end of the 2019-20 season or four seasons from the end of this one.

Due to injuries keeping him out, Sidney Crosby has played in only 78.8% of POSS GP despite joining his team immediately after being drafted like so many others on this list. Crosby has met 62.6% of his pick value and without missing time for injuries, will fulfill his pick value midway through the 2019-20 season. If we include playoff games, both of these players will fulfill their value earlier than that since both appear on teams regularly in the playoffs.

Obviously, each of these first overall picks are very different players and some stand out as being far superior to others based upon their play, points and what they contribute to the team. The value of the first few players taken in the draft is usually fairly obvious. This system is far more useful as we move down through the draft and discover which players have appeared in more than their expected number of NHL games played or at least look poised to do so.

Players drafted in the second round (overall picks 31 through 60 for our purposes) range in value from 255 to 175.

The graph above shows the 2nd round forwards who have met or exceeded their expected value and a few more recently drafted forwards who are far ahead of their peers in this regard. Paul Stastny, drafted in 2005, leads the way in points and value percentage. James Neal has already appeared in more games than expected and has accumulated the second highest point totals of these forwards. The forwards drafted in the 2nd round of 2010 and 2011 provided very few options in terms of appearing in many games. Tyler Toffoli and Devante Smith-Pelly lead their peers from the 2010 draft in terms of fulfilling their expected value. The highest value percentage and points mark for any forward drafted in the 2nd round since 2010 belongs to Brandon Saad despite the fact that he was drafted a year later than his competition among this group. Saad has already fulfilled 74.4% of his expected games played value and should reach the 100% mark, barring injury, by the end of the current season.

By the time we get to the 3rd round of the draft, pickings are slim to find players who have fulfilled their expected games played value. Some of the defensemen drafted in the 3rd round (overall picks 61 through 90 for our purposes), are included in the graph above. Some of the players on this graph are not even playing the NHL right now, which is further evidence of how hard it is to find quality players in what normally is thought of as fairly early in the draft. Kris Letang is the obvious standout in the group. Cody Franson, Kris Russell, Jamie McBain, Yannick Weber and Mark Fraser have all played more games than they were expected to given the spot they were drafted. Some of the more recent picks look to hold some promise of outperforming their expected value as well. Tyson Barrie and Radko Gudas have both made names for themselves early in their careers despite being chosen in the 3rd round.

When we look at the forwards, a pattern starts to emerge that becomes more pronounced as we move on to later rounds of the draft. Points and Value% are the x and y axis in the graph above. The circles represent penalties in minutes (PIM). I tend to think of the 3rd round forwards as the “transition” group. These are often “gritty” forwards who can score some points but also bring an “edge” to their game that earns them spots on better forward lines than their pure talent would normally allow. After this group, i.e. in later rounds in the draft, the forwards tend to break into two distinct groups: buried treasures and enforcers.

The outliers on this graph of forwards drafted from the 91st overall pick and after are an excellent illustration of the two main groups I referenced above. Jamie Benn and Patric Hornqvist represent the “hidden gems” among the lower round forwards. Jared Boll, Derek Dorsett, Zac Rinaldo, Matt Martin, Ryan Reaves and Frazer McLaren represent the “enforcer” or energy line type of players.

This is the same graph but zoomed in a bit so we can see some of the other players who have not played as many games and the differences between them. The points and PIM are current through the end of November so these have changed a bit but the general idea comes across. The players who tend to rely upon their physical game are farther to the right, while the players who rely more on skill are higher and to the left. Some of the players on here are no longer in the NHL, but because they are familiar names, I included them.

Another way to look at this to get a better idea of the difference between the forwards drafted in the lower rounds is to focus on PIM per game and their games played. Even the more pesky of the forwards on this list, Andrew Shaw, Jared Nolan, Tommy Wingels, Joe Vitale and the like have far lowers PIM per game than those near the top of the graph. Those higher than 1.5 PIM/Game serve a very specific purpose for their teams. It is highly likely that these players would not be in the NHL but for their willingness to fight and hit at very high rates.

The defensemen drafted in the lower rounds do not follow the same pattern as the forwards. This is likely because forwards and defensemen have very different uses when it comes to physicality being central to their play. Hit rates for “energy” line forwards are consistently high throughout the league whereas defensemen, regardless of their pairing have widely varied hit rates. As such, the defensemen drafted in the lower rounds are not dependent upon being fighters or big hitters as a rule.

The graph above shows points and the percentage of the player’s assigned draft pick value that the player’s games played represent. The two major outliers on the graph above are Keith Yandle and Anton Stralman. Yandle was selected with the 105th pick which carries a value of 99, keeping in mind that the value is a projection of the games the player is expected to play over his career. Stralman was selected at 216th overall which carries a value of approximately 42 games. Both of these players have not only largely out lasted the projections in terms of games played but also for the talent expected to be found with those picks in the draft.

There are other defensemen who have also been draft fairly low and managed to make it into the NHL. Of course, there are varying degrees of talent at play here so it is important to keep in mind that the Value percentages are based upon games played. Niklas Hjalmarsson and Jake Muzzin are the best of this group with T.J. Brodie quickly moving up those ranks as well. Jared Spurgeon is making a solid case for himself too. Sami Vatanen, Mattias Ekholm and John Klingberg are also notables among this group. Their development over the next few seasons should be interesting to watch.

Looking at the actual numbers, it is sobering to realize just how few of these players ever get into the NHL and how much that number dwindles when we look at players that stick past a season or so. It does act as a reality check for the expectations we place on drafted players though. In the second part of this post, we will take a closer look at how players are developed by various teams and which teams seem to have a better ability to draft NHL talent.

**Thank you to Corey Pronman, NHL writer for ESPN.com, for pointing out Mr. Schuckers’ paper to me when I asked him for advice while researching this topic.