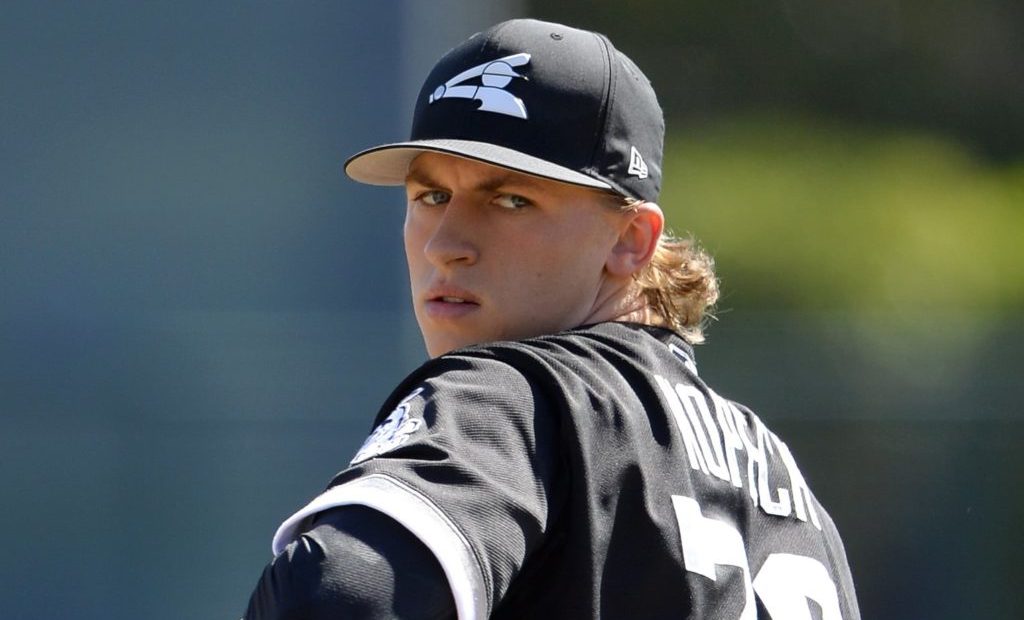 September 5th, 2018. A day that will live in infamy, as it was the last major league start where Michael Kopech took the bump for the White Sox. He only lasted 3-1/3rd innings in a game beset by weather delays. The whole start Kopech just didn’t look right. His velocity was down, and none of his stuff was dancing like we’d seen during his first couple starts. After the game came the news he was going for a scan on his pitching arm, and all of us Sox fans knew in our hearts what that was going to lead to.

Two weeks later he underwent successful Tommy John surgery, putting the final nail in the Shit Coffin that was the Sox 2018 season. It wasn’t so much that he was lost for the rest of 2018, that turd was flushed long before he ever came up from the minors. It was more that he was the only bright spot that year. A reminder to the loyal that while this season may suck, it sucks for a REASON. A brighter future awaits next year. Then in a puff of smoke and 6 hours of elbow surgery that brighter 2019 we dreamed of was gone like a hanging Ross Detwiler curve.

Every five days last season I wondered “man, how different would this game have been if it was Kopech starting instead of Dylan Covey-Detwiler-Despaigne?” How much closer to .500 would they have been if Kopech had been firing 99 mph fastballs and punching out chumps instead of us watching yet another Dylan Covey “sinkerball” penetrate the stratosphere with a 300 mph exit velocity? Now, with the 2020 season (eventually) here, (hopefully) we get to see what kind of devastation a bionic Michael Kopech can unleash upon the league.

Last Week On Nitro: Since Kopech only started 5 games at the major league level in 2018 (and I’m assuming at least a few of those were with his UCL in tatters) I decided to eschew the normal stats and post what he did at AAA Charlotte in 2018. A few of those things jump out at you, the obvious one being the 170 strikeouts in 120 innings for a 12.11 K/9. That strikeout level is cartoonishly awesome, and I have a hard time getting stats like that playing on rookie level in The Show on PS4 (gamertag Ahota88, come at me) (Actually don’t, I’m not very good at all). For comparison his 12.11 K/9 would’ve tied for 4th in the league last year with Justin Verlander. Granted, those stats came against minor leaguers but hitting stats in AAA have been crazy inflated for the past few years since they switched to the plutonium ball, so it’s not totally dismissive.

The other thing that stands out is the 4.27 walks per nine innings. That’s…not great. It would’ve landed him 3rd from the bottom in all qualified starters last year. Looking a little closer, a majority of those walks came in the first two months of the season where (if you’ll remember, and it was 2018 so I’ll forgive you if you don’t) he was famously struggling with his command. Once the calendar flipped to July, he found his command and never looked back. Up through June, he walked 52 batters and then from July through the end of August when he was called up he only walked 8 in 8 starts. That’s WAAAAY more what we would want to see command wise. I’d also point out that despite the crazy high walk rate, his WHIP was only 1.27 and that’s with getting sub par defense behind him as evident by his 3.30 FIP! If he would’ve kept the walk rate that he had in the last few months of his time in AAA his WHIP would’ve been close to 1, which is pretty bananas.

After his stint skull-punching his way through AAA rosters, he finally got the call from Rick Hahn to the big league team on August 21st against the Twins. In what would become an ongoing theme for his short time in the majors, rain cut that start short. In that brief glimpse, however, we saw more of the same stuff he displayed down in AAA with his fastball touching 99 mph and his slider diving away from right handed hitters. He struck out 4 in 3 and 1/3rd innings, and looked every bit the top prospect arm he was billed as. Sadly for us, a little over a month later he was done and we’ve barely seen him since. Before the league shut down due to the pandemic, he logged a single inning down in spring training. In that single inning, he threw 11 pitches, 4 of which were clocked at over 100 mph. *shocked face emoji*

Too Sweet! (WHOOP WHOOP): Best case scenario for Kopech this year? Honestly at this point it will completely depend on how long we are without baseball. I’m sure he’s back home right now throwing into a net or something but if the season was normal the Sox were not planning on having him with the big league team until May at the earliest. If the league starts play at some point in June the possibility exists that he’s on the “opening day” roster as the Sox 6th starter.

If that’s the case, then the best scenario for him is probably 10 starts or so over the course of the shortened season, with 75-90 strikeouts and a 3.10 ERA.  The possibility exists for him to log more innings than that, given Gio Gonzalez’ recent injury history and need for maintenance days. Really, though, as long as he can stay healthy and take the ball every 6 days or so I will consider the 2020 season a win for Michael Kopech and the White Sox.

You Fucked Up! You Fucked Up!: Absolute worst case scenario for the Sox here is an injury filled return for Kopech, and he ends up as the White Sox version of Brent Honeywell: infinite talent, but infinite injury. The other issue here is the original Tommy John surgery itself. Pitchers on average are about 78% successful at returning to peak form after a TJ surgery, which while very high, still leaves the possibility that he comes back not as he was.

In this scenario, he’s forced to completely overhaul his approach to challenging hitters. This brings to mind John Danks after his shoulder surgery, and that may have set back Jerry Reinsdorf’s willingness to pay for a pitcher back about a decade. If this were to happen, he goes from a potential ace to maybe a 5th starter or more likely a long reliever. This would make us all very sad, as I don’t want anything other than Kopech destroying the world with 100 mph fastballs.

Bah Gawd That’s Kopech’s Music!: If the season starts at some point in June, the odds are either Kopech starts in the bullpen to stretch him out or Ricky Renteria gets with the times and provides him with an opener. In both these scenarios there is no reason not to let him off the chain and have him throw smoke right out of the gate. I would think the Sox are going to try and get him close to 100 innings in a shortened season. A 3.90 ERA with over 100 strikeouts would be acceptable in this situation as long as his velocity and movement is still close to where it was.

In reality, just getting to watch Kopech on the mound again for the first time in almost 20+ months will be enough to put a smile on most Sox fans faces. Shortening the season by a few months and having him ready to go for a late opening day could be the only side benefit of having this awful pandemic sweeping the world. Hopefully we will see him sooner rather than later, and all of you are safe and healthy out there. Cheers!