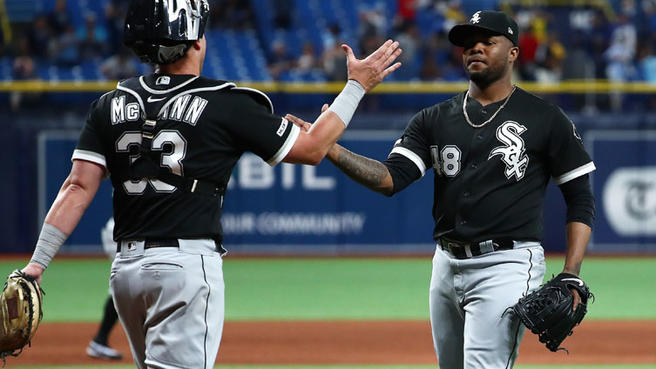 We’re rounding out the White Sox 2020 previews with the bullpen…in the middle of a global pandemic!

The Sox pen was a middle of the league unit in 2019, with some very solid returns on a few previously relative unknowns (Aaron Bummer(at least to the national stage), Evan Marshall), a stinker from at least one big signing (Kelvin Herrera) and a tale of two halves from the incumbent closer Alex Colome. Along the way we also got acclimated with storylines about Jimmy Cordero‘s guns and the Ballads of Carson Fulmer and Jace Fry.

So what should/could be expected from a 2020 bullpen that saw very little turnover, a single addition in Steve Cishek, new paper for few of the higher leverage fellas…and a potential 80 game season/29 or 30 man roster? TO THE MOUNTAIN TOP!

Last Week on Nitro: Bummer rode his nasty sinker to a very respectable 1.7 WAR, on par with the top RP in the league. If he had a K/9 over 11 instead of under 8 he’d probably have added another .5-1 WAR and been discussed as an elite RP, easily usurping Colome on his way to a nice raise and term. He settled for simply obtaining a new 5-year, $16M extension and I have to believe he’s fine with it. Marshall wasn’t quite as electric or outstanding on the eye test, but he was used in bigger and bigger spots as the season wore on and earned his spot in the 2020 discussion. Colome was a force in the first half saving 20 games before the ASB, albeit with some alarming underlying stats that would catch up to him for a much more average 10 save second half.

2019 was not all sunshine and rainbows for the relief corps on the South Side. Fry had a great SO rate of over 11/9IP, but couldn’t keep the ball in the yard enough (22% HR/FB). Herrera and Fulmer were flat out bad, with the former posting a 1.40 HR/9 rate and the latter just atrocious in every facet…yet again. Juan Minaya was fine? Jose Ruiz was solid? Really everyone needs to thank Bummer for buoying the RPs GB rate as no one else broke 60% (Bummer was nearly 73%).

TOO SWEET (WHOOP! WHOOP!): Things are different now than they were a month ago. This post would have hit in late March, and the best case scenario would have involved a four-headed monster closing out White Sox wins with Colome/Bummer/Herrera/Cishek operating as the go to bridge/closer committee and Marshall coming in to keep the other fresh. Fulmer/Cordero/Fry…and Minaya or Ruiz or Ian Hamilton or any number of solid minor league arms would have made up the remaining four spots, in what would be seen as how many contending, successful teams run a bullpen:an innings eater or two and then best arm up with a short leash for awfulness. But what does this look like in our new world post-virus…

The same four make up the go-to options for Rick Renteria to close out games, but the roster behind them is one with a lot more strength. All of the sudden he’s going to have Carlos Rodon and Gio Gonzalez as options, and likely an 11th RP option in the event that rosters expand to near 3o for a shortened season, and especially if we see 7 inning double headers as part of this season. Bummer/Colome are a nasty tandem depending on how the handedness of batters shake out in the 8th/9th, and Cishek, Herrera and Co. build the bridge without issue on most days. Rodon and Gonzalez become serious game changers for the shortened outings/double headers and the White Sox pen is as formidable as any in the AL despite the lack of a true strikeout RP.

YOU FUCKED UP! YOU FUCKED UP!: The shortened season could work against the bullpen just as easily, seeing a plethora of options for Ricky to go to but none with enough trust or ability to translate leads into wins. Bummer sees a slight regression, but so does Colome. Herrera does not bounce back in year two, Fulmer/Fry/Ruiz/Cordero stall in place and Gio and Rodon translate terribly to shorter outings. An arm or two from the minors show out, maybe 1-2 of Zack Burdi, Tyler Johnson, Matt Foster or Codi Heuer to be precise, but that’s the silver lining in a frustrating, disjointed campaign out of mostly underperforming pen.

Colome hits FA on a sour note, Bummer makes people (stupidly) question his extension and the 2020 offseason becomes a quest to fix the relief problem. The biggest talking point out of the pen remains Jimmy Cordero’s arms vs. his jersey sleeves.

BAH GAWD, THAT’S (THE BULLPEN)’S MUSIC: The 2020 season will be a success if it’s simply played at this point, IMHO. The White Sox 2020 bullpen will be a success if the BIG FOUR can be passable to above average on a nightly basis, Rodon comes back firing in small sample sizes and at least one of the bottom four/minor league four turn in a 0.1 WAR or above season.

IF we have baseball in 2020, pitching is going to be paramount to success. There will be a ton of variables and I think many can agree that pitching is going to be harder to re-ramp up and succeed at than hitting. A solid Sox pen could be the real difference to a positive springboard off a short season into the 2021 and beyond contention era.