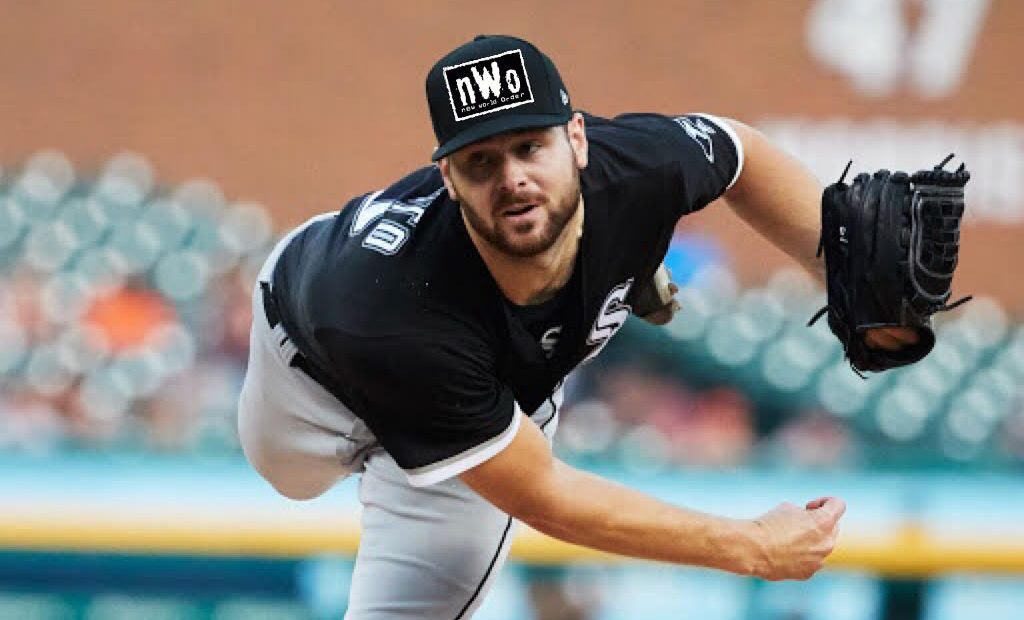 With the position players all wrapped up, we come to the spot on the diamond that will matter the most to the playoff hopes of the White Sox, the pitcher’s mound. From where things stand offensively for the Sox with additions made in the off-season, run production is not going to be an issue for the team moving forward. If the Sox truly have deigns of making the playoffs it’s the pitching rotation that’s going to have to step up and mow some people down.

Since we’ve gone all in with the pro wrestling analogies so far, we may as well keep it going. Every good faction in wrestling needs a leader. Evolution had HHH. DX had Shawn Michaels, and the nWo had Kevin Nash. I guess that makes Lucas Giolito the Kevin Nash of the White Sox rotation.

Last Week On Nitro: 2019 for Lucas Giolito was an amazing leap forward from his status in 2018 as “World’s Worst Starting Pitcher” (at least according to Fangraphs) to “Top 10 Starter In MLB Worthy of Cy Young Votes” (Also according to Fangraphs). He bettered his stats from the previous year in every meaningful category, but none more impressive than his K/9 rate, which jumped from 6.49 to 11.62. Giolito credits this jump to work he did in the previous off-season to completely overhaul his mechanics and delivery to give his fastball more movement and allow more pinpoint accuracy at the top of the strike zone.

The results were nothing less than phenomenal, as his 5.1 WAR was second on the team only to Yoan Moncada‘s 5.7 tally. The stats could’ve been even better, but a lat strain caused him to be shut down early and miss his final 3 starts of the year (2 of which would’ve been against the moribund Tigers offense). That likely cost him a few AL Cy Young votes, but ultimately his progress in 2019 is far more important than any award and he’s cemented as the White Sox ace for the next 5 years unless a resurgent Michael Kopech takes it from him.

Too Sweet! (WHOOP WHOOP): Best case scenario for Lucas Giolito this season is he continues his upward rise towards the top of the American League pitching lists. He’s able to stay healthy, and avoid the post All Star break slump that ended up costing him about a half point of ERA in 2019. He breaks the 275 K plateau, bumping up his WAR for the season to above 6, making him the first Sox player to crack that ceiling since Mark Buherle almost did it in 2005 with a 5.9 season. He also finishes top 3 in AL Cy Young votes, and secures his 2nd All Star Game appearance.

If his delivery arm slot holds up and he’s able to replicate the successes of last season, I’m certain Rick Hahn will reach out to Giolito’s camp and begin discussions for a contract extension. While I don’t think the deal would end up nearly as team friendly as the one signed by Chris Sale back in 2013, there would still be value for both sides of the aisle by having the team buy out his remaining arbitration years. Keeping Giolito in a Sox jersey for as long as possible would reduce the sting of being forced to send the team’s previous young ace away.

You Fucked Up! You Fucked Up!: Worst case scenario for Lucas Giolito has already happened, and it was called the entire 2018 season. I’ll throw up his stats from that godawful year as a comparison to the 2019 ones above:

Just looking at those numbers sends a cold shiver down my spine. Having personally watched multiple Giolito starts in 2018, I can say those numbers were all very well deserved. Thankfully, Giolito’s underlying numbers last season supports his turnaround as being genuine. He actually had worse batted ball luck in 2019, based on his .273 vs .268 BABIP numbers. While nothing is impossible, I certainly would bet on the 2019 Lucas Giolito showing up this year as opposed to the 2018 version.

The other thing that could derail his season would be injuries, but seeing as though he’s already had Tommy John surgery the odds of that recurrence would be pretty low. Other than that, he’s been pretty durable throughout his career with the last few weeks of September being the only extended time missed. Fingers crossed this trend continues.

Bah Gawd That’s Giolito’s Music!: This season is going to be more of the same for Lucas Giolito. I would fully expect any innings restraints to be off him, so barring any major time missed for injury I would think he’d eclipse the 200 inning mark for the first time in his career.

Adding in the new high in innings would also give him the chance to blow past the 250 strikeout line, which when factoring in the framing skills of Yasmani Grandal seems all the more likely (I also feel like I’m going to be talking about Grandal a lot during the pitching portion of the previews, in a very good way).

My final stat line for Giolito looks something like this:

Home runs are always going to be an issue for pitchers who ride the top of the zone like Lucas does, aided and abetted by the bandbox nature of The Down Arrow. As long as he can keep those under 30, I see no reason for a huge jump in any of his peripheral stats. The defense behind him could definitely be an issue, as outside of Luis Robert in center field there isn’t much in the way of plus defenders there until Nick Madrigal makes his triumphant entrance at second base.

With some reinforcements coming in behind Lucas in the rotation, this season looks like it could be the sequel to his triumphant coming out party in 2019. Strap in, everybody. Looks like it’s gonna be a fun year of baseball on the South Side.