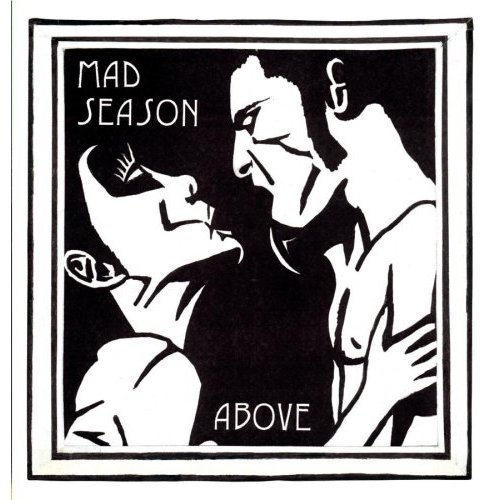 The past couple days, maybe due to the weather, I’ve had Mad Season’s “Above” be the album of choice. I think most of us either smirk or choke when we hear the term “supergroup”. Mostly because they almost always end up sucking. Slash has been trying it for two decades and it hasn’t worked yet. Audioslave somehow managed to take Tom Morello hooks and Chris Cornell’s vocals and be boring. Army of Anyone was awful, The Dead Weather never really popped, and so on. Temple Of The Dog doesn’t even really count because they were formed before Pearl Jam started and Soundgarden hadn’t hit the heights.

There have been a couple that have been good. Them Crooked Vultures’ lone album put a foot through a llama’s ass, but anything Josh Homme does is pretty much a supergroup. The Raconteurs released two pretty good albums, though I don’t know if I’d go so far as to call them great.

One that did nail it was Mad Season. The leading members were Mike McCready from Pearl Jam and Lane Staley from Alice In Chains. It’s notable as this was probably the last recording that Staley remained mostly upright for. After that, Jerry Cantrell took over at least half the lyrics for AIC’s last album, and I’m kind of convinced it was because they couldn’t wake Layne up for most of the sessions. The lineup was rounded out by Screaming Trees (a criminally underrated band) drummer Barrett Martin and bassist John Baker Saunders.  Mark Lanegan did lend some guest vocals as well.

You probably remember “River of Deceit”, arguably the best ballad to come out of the entire Seattle scene (Screaming Trees’ “Look At You” would have to be up there as well). I admit to an emotional connection to that song. When it hit the radio stations, I was having some semi-serious digestive problems and was in and out of doctors’ appointments and operating rooms for a couple weeks (which led to me being pretty underweight for my height until about a month ago, or so it feels). I’d even taken to wearing a hospital gown to school at times, thinking it was pretty punk or something (yes, I know. Don’t say it. I was in 8th grade, I thought a lot of stupid things. Then again, not much has changed)

And every time we headed down to Rush (the hospital, not the band), “River of Deceit” was on. And I didn’t mind. It summed up where I felt I was at the time, and the haunting quality of it matched perfectly with spending far too much time in a cold hospital.

In fact, the whole album has a haunting quality to it, like it was recorded on a cloudy day in the woods — though Seattle probably isn’t that much different. “November Hotel” is an expansive instrumental. “I Don’t Know Anything” is a song that actually feels grunge-y, like if you put your hand in it it would come out covered in some type of goo.

McCready has been the only member of PJ, at least until Matt Cameron joined up, that I felt like it would be cool to hang out with. Jeff Ament and Stone just seem completely uninteresting (though I know they do most of the writing) and Vedder obviously would have his own issues. But McCready always seemed like the the one who was always having fun, and there is a tinge of frustration that Pearl Jam doesn’t always let him bust out like he’d like to.

The one time I saw Pearl Jam in Saratoga Springs in 2000 (Sonic Youth opened. Sometimes having an older brother to take you to these things is really awesome. Though these days there’s something insulting about Sonic Youth opening for anyone. And yes, Kim Gordon’s legs were still setting hearts afire then), at the end of the encore McCready burst into the intro to Zeppelin’s “Nobody’s Fault But Mine.” Cameron briefly looked like he was about to join in, until they were stared down cold by Gossard and everyone left the stage. I feel like that’s the entire dynamic of Pearl Jam right there.

But anyway, this is a neat, sometimes overlooked treasure of the Seattle scene. While Staley as a person and vocalist is a punchline these days, you can’t deny he had a unique voice and style. And he was obviously more important than we first thought, because Jerry Cantrell has been pretty much lost without him.

Anyway, use the comments to talk about what you’re listening to these days or to talk about Mad Season or whatever you like. It’s the weekend, have fun with it.